From UP President Fr. Mark Poorman just minutes ago:

I am announcing today that the Fall 2020 Semester will begin on August 24 with nearly all classes held exclusively online. Residence halls will remain closed with some limited exceptions. Most faculty and staff will continue to work remotely. We are hopeful that a return to in-person instruction for the Spring 2021 Semester will be possible. Of course, we will continue to monitor conditions to determine if such a return is safe and feasible. Our Fall Semester will begin on August 24 and conclude on December 10. Fall Break will be held from October 12 to October 16. More specific information on our academic calendar will be shared with you in the near future.

We don't yet know how this will effect athletics...but it doesn't look good.

I assume the WCC will have a coordinated response?

Snus Junction wrote:I assume the WCC will have a coordinated response?

Don’t count on it. I think the conference office is following the president’s lead.  Last week I layed out links to each school’s COVID-19 response. They are all different. It’s the exceptions ( not listed) in UP’s latest that might matter for UP Sports. Stay tuned.

But seeing as how California cases have drastically increased since CA schools set out their plans, expect modifications.

Last week the only schools that were going to open their campuses fully we’re us, the Zags and BYU. Looking at the ZagOn 2020 site, looks like they are headed towards shutting the campus also. The next few days will show.

BYU seems to still be on the phased opening path for now.

BYU as has had 78 Covid  cases during the summer session,of which 31 are considered to have recovered.

I’m not sure if this affects their plans for fall attendance Or for sports.

Scratch the USC game from the schedule.

Could be worse. Gonzaga looses Oregon, Washington, and Arizona.

If they'd let us across the border, we'd come to Canada and watch with you. 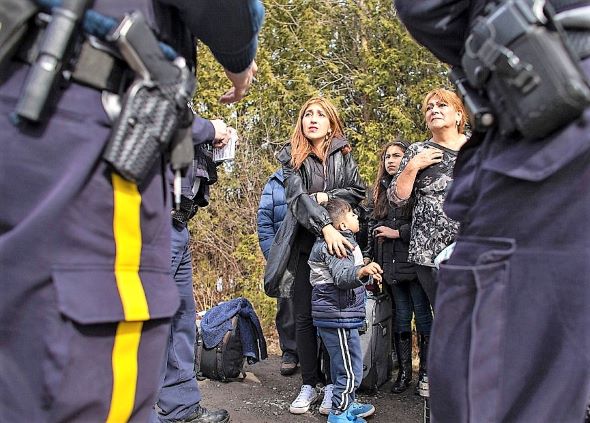 As it is, everyone is complaining about losing football, including the president, but to my way of thinking, the ones who should shoulder the blame are the same one who are complaining.

It's not too late folks, start distancing and wearing masks now and there might even be a basketball season...although I understand the WCC is considering basketball going into the bubble until America wakes up.

All fall sports at UP are canceled...but that does not yet include basketball...a winter sport that usually starts in the fall!

The postponement will impact University of Portland men's and women's soccer, women's volleyball and men's and women's cross country. The conference intends to explore various models for conducting postponed fall sports in the spring of 2021. Discussions involving scheduling models, gameday safety protocols and a timeline for WCC competition are ongoing and will be shared at the appropriate time.

The WCC will not prohibit member institutions to individually determine whether to participate in non-conference fall competition or events as they deem appropriate.

The decision does not impact the 2020-21 WCC men's and women's basketball seasons scheduled for the winter.

Scott Leykam answers our questions as best he can with the uncertainty of the pandemic still ahead of us.

From Scott's comments, it would seem UP will likely lose some soccer players to the pros with the cancelation of the fall season, but baseball will retain some players that might have turned pro had there been a minor league to go to.

As some high school athletes as far as two or three years out have committed to UP, the scholarship situation will be tight if current athletes get an extra year of eligibility unless the NCAA allows some relief on the number of scholarships allowed, and even if more scholarships are allowed, UP may not have the money to support them.

Turns out MBB will miss the opportunity to play at UW, and WBB will not get the chance to play at ASU or host the Ducks due to the Pac-12 canceling until 2021.

Is their any news on the schedule with COVID19, do you think the WCC will allow crowds, a few of us Aussies were looking at heading over to watch, the Aussie Pilots in action, please post any info at all. thanks

Oregon is in better shape, but Multnomah county is still in Phase 1 , which means gatherings of 50 or fewer with masks and social distancing. Frankly, the status has been improving, but still not graduating to Phase 2. We’ll see what happens when cold weather hits.

I expect that if there is a season, the WCC will go into a bubble and fandom will be virtual.

You can book flights, but make sure they are refundable, and get assurances from Scot Laykem you will be admitted before you hop on the plane or your entertainment will be long walks in our Temperate rain forests. ( not all that bad)

The good news is the ski lifts on Mount Hood are socially distanced by their nature. Or bring a wet suit for some great windsurfing in the gorge.

To stay up to date on Oregon status by county go here:
https://govstatus.egov.com/reopening-oregon#phase2Guidance

You can also sign up for daily status reports on that site.

Even if the Australian authorities allow you out of Australia, what are the chances they'll allow you back in after visiting the US?

This is not the season to come to the US to watch basketball...especially if you are looking to watch the Aussie-Pilots, as next year there should be even more Pilots from Down-Under.

There is currently only one Aussie on the men's team, and contrary to the thinking of many, I believe there is a good chance Zak Triplett will redshirt.

For the 21-22 team the Pilots have made an offer to David Okwera from Melbourne, but that seems a long shot as he has received offers from several high major schools, including Wake Forest.

On the other hand, the Pilots women's team has four Aussies on the current roster (and a Kiwi), none of whom graduate this coming spring, and the 21-22 team will include two more Aussies and another Kiwi.

Final tally: The 21-22 women's team is expected to include six Aussies and two Kiwis.

Maybe stopping the spread of COVID-19 will be less of a political issue a year from now…and although I would like to hold my breath until there is a change of attitude, I think we are going to have to wait for a vaccine to drop the number of infections to a reasonable level.

Looking forward to seeing you during the 2021-22 season, as coming to the US before then is just too problematic, IMO.

The office brackets might have to be printed on poster-sized sheets this year...

The office brackets might have to be printed on poster-sized sheets this year...

Um, not for the one-and-done Pilots.

....which brings up how they are going to end this tournament. Draw lots?

Geezaldinho wrote:....which brings up how they are going to end this tournament. Draw lots?

My question is how are they going to begin the tournament?

Let's see, 346 X 20 = 6,920 + officials, media, medical = around 7500 people in Disney World including unpaid college kids...yeah, that would certainly continue the USA's dominance in the novel coronavirus.

Geezaldinho wrote:....which brings up how they are going to end this tournament. Draw lots?

My question is how are they going to begin the tournament?

Let's see, 346 X 20 = 6,920 + officials, media, medical = around 7500 people in Disney World including unpaid college kids...yeah, that would certainly continue the USA's dominance in the novel coronavirus.

That was supposed to be seed.

As to playing it, that’s only 8 rounds and a play-in. And considering the rate at which teams will fold, 7 rounds might do it.

A bunch of round robin mini series leading to a ko round might be better. Half the teams will have a 1 game season otherwise.

The NCAA is NOT looking to expand the NCAA Tournament as the ACC proposed --- or in any way --- in 2021, per Dan Gavitt

So the vote today is to push back the start of college hoops by two weeks to November 25.

Why that date? Obviously to preserve the Portland Classic, which features Idaho, Cal Poly, and VMI and is scheduled to begin November 25!

But really, what's more likely - VMI actually following through and travelling to the other side of the continent during a pandemic for a non-conference tournament featuring three 300-ish ranked teams in the country? Or them finding a different tournament closer to home and their spot being filled by a West Coast team who had their early-season MTE burned by this new start date? (My guess - VMI out, Cal Baptist in)

Dean Murdoch wrote:So the vote today is to push back the start of college hoops by two weeks to November 25.


As Deaner indicated, the NCAA D1 Council has approved November 25 as the start date for college basketball.

Team workouts of up to 12 hours per week (only 8 on the court) will begin September 21st.

Official practice will begin on October 14th and all team’s schedules are now limited to no more than 27 games during the regular season.

The recruiting dead period has been extended to January 1st.

HOWEVER, that does not mean WCC schools will begin their season on November 25th, as it is up to the governors of California, Oregon, Washington and Utah give their approval for gatherings of any size and to decide whether fans will be allowed at games.

As most know, the Big Ten announced today that its football season will begin on October 23 and 24 (likely without fans in the stadiums) and today Oregon Governor Brown and the Oregon Health Authority granted an exemption for UO and OSU sports to commence pending their approval of the Pac-12’s plans to keep players safe from COVID-19.

And one would think the WCC will follow the Pac-12's lead in procedural approval from the governors to play ball!

From Governor Brown's office: "Let me stress that, up to this point, we have received no written plans from the Pac-12 for the upcoming season, and we have no details from the conference about their new rapid testing proposal. Until we have those details, we can’t move forward in the process." 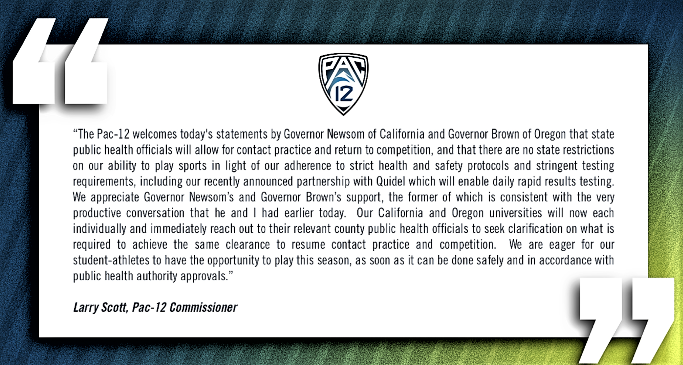 DoubleDipper wrote:And one would think the WCC will follow the Pac-12's lead in procedural approval from the governors to play ball!

From Scott Leykam, UP Vice-President for Athletics:

"Nobody is pulling for the Pac-12 harder than I am right now. If football can be played safely, it opens the door for basketball and soccer and everything else.”

There are now only 65 days until the season is allowed to begin according to the NCAA, but according to this writer, UP fans can expect the same old, same old...nothing!!

I'm of the opinion the WCC coaches are confident there will be a WCC regular season, but if there is to be a preseason, it is up to the students and fans to ensure conditions are right for the governors and health officials of California, Oregon, and Washington to okay play...hopefully with fans in attendance.