Hope you like day games, as all preseason games begin be at 5pm or before, and one game on a Wednesday begins at 11am...if this for school kids in the area, it should be great fun!

DoubleDipper wrote:After 6-1 forward, Alex Fowler, from Townsville, Australia, signed with UP in May, I've been looking forward to seeing the complete roster for the upcoming season, as it may for the first time in my memory, include as many 14 scholarship players.

The 2019-20 WBB roster has been released and there are 13 scholarship and two walk-on players on the team for this coming season.

I initially thought there would be 14 scholarship players (the women are allowed 15), but 6-3 Elena Alaix from Spain, has transferred to D2 Northern Michigan.  Can't really blame her...after playing in only 10 games last season and averaging 5 minutes per game, it was pretty apparent she would be down the depth chart again this season.

As expected there are five new players on the roster, four freshmen and one junior transfer from PU, Rose Pflug...but it is still unknown if Rose will be eligible to play this year...I understand UP is attempting to get her a waiver from the normal one year of sitting after transferring

School has started and team drills have started...it won't be long before practice officially begins and the Pilots, under the new leadership of Mike Meek, gets the season underway on November 2nd.

The WCC Preseason Poll is out...the Pilots are expected to finish last, and zero Pilots landed on the Preseason Team.
https://portlandpilots.com/news/2019/10/2/wcc-releases-the-womens-basketball-preseason-poll.aspx

Coach Meek and his staff have installed a new system, and so far, after four very structured practices, there has been a lot of stopping of play to teach and learn the fundamentals of the game...something that Mike has done in his previous head coaching positions in high school and at D3 George Fox.

The standout in practice so far is freshman post Alex Fowler.  Her FIBA U-19 experience will be a big aid grabbing rebounds and she appears to be capable of a good 10 points and 10 boards each game down low.

It's easy to get excited about the upcoming season with five new players and three new coaches...the Jim Sollars' sweater vests are back!!

First game, an exhibition against Lewis & Clark, is on Saturday November 2 at 5pm. 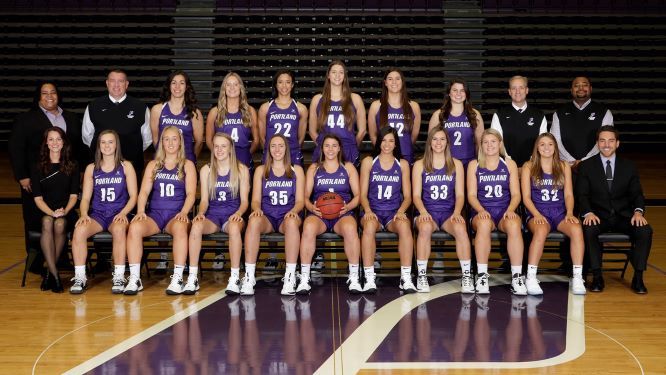 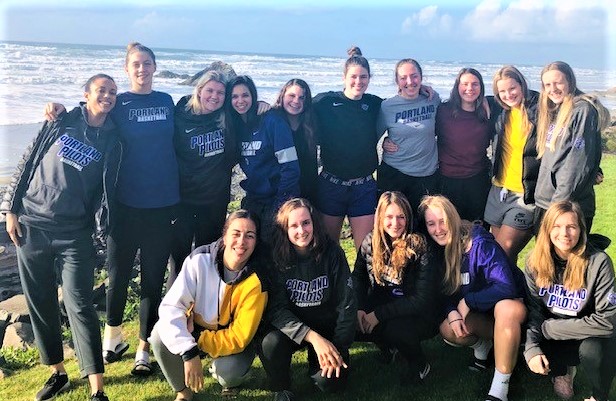 DoubleDipper wrote:As expected there are five new players on the roster, four freshmen and one junior transfer from PU, Rose Pflug...but it is still unknown if Rose will be eligible to play this year...I understand UP is attempting to get her a waiver from the normal one year of sitting after transferring.

The good news is Rose Pflug's waiver request was approved and she'll be eligible to play this season, but the bad news is it may be awhile before she can practice/play because of a bad knee...

If you're not going to the men's soccer match on Saturday, you can come out to the Chiles Center at 5pm to watch the four freshmen and the rest of the women's basketball team take on Lewis & Clark... 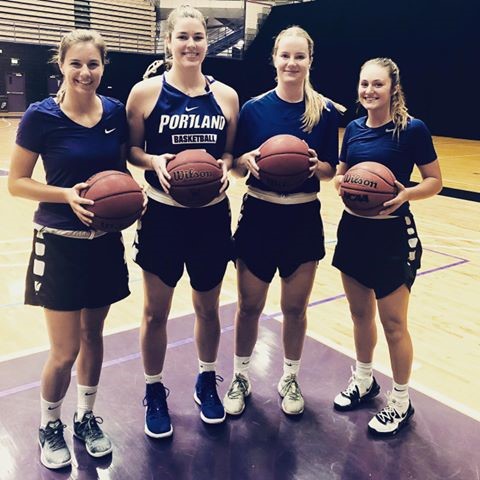 Excited about this class and the general direction. Nice to see the players have grown an inch since they signed. The food at the Commons might be underrated,.

UP's domination of Lewis & Clark, 92-30, was so overwhelming it was difficult to tell if UP was very good or L & C was very bad...but UP's 20 turnovers has to be of concern to the coaches!

It was 58-11 at the half before the Pilots lifted the pedal somewhat in a game where the starters played far fewer minutes than the subs.

The real test will come next week when UP travels to Utah St. for a 10am game and then to Weber St.

It took awhile for the Pilots to get rolling after a 10am start at Utah State, but after trailing by 12 after the first quarter, and after giving up 21 turnovers (18 by steals), the Pilots came back for the win in Logan, 70-64.

Coach Meek is obviously happy to have a 1-0 record as a D1 coach, but you know the entire staff will be emphasizing ball control during the short turnaroud before playing Weber St. on Saturday.

It's really hard to fathom Haylee Andrews giving up 9 turnovers as she's usually very good handling the ball, but she did score 18 and grab 13 rebounds to help the cause.

Freshman post Alex Fowler played 31 minutes (that's a lot for a UP post!) while scoring 16 and snagging 13 boards, while Maddie Mulheim hit 5 threes, and the team shot 53% from the floor to overcome all the turnovers.

Despite being outrebounded 35-21 and committing 16 turnovers, the Pilots hit 56% from the floor and were 15-18 from the line enroute to their 78-59 win over Weber State.

Now 2-0 on the season with two wins in Utah, the Pilots return to action at the Chiles Center at 11am on Wednesday against Warner-Pacific...expect a lot of kids, as the game is part of Portland Education Day.

Lest we obsess and occassionally utter heresies regarding the men's team, recognition of the competitiveness of the women's side is likely due. A winning year would be refreshing. Perhaps better is coming.

However our basketball playing Aussies chose Portland(whichever men's assistant helped, and of course the prior coaching staff), their contribution is unmistakable.

Congratulations to Haylee Andrews on being named WCC Player of the Week.

wrv wrote:Congratulations to Haylee Andrews on being named WCC Player of the Week.

Haylee was picked at #6 on the preseason list of Top-10 Female Australian D1 players in America (at last count there were over 90 Aussies playing D1 women's basketball):

And her teammate, Alex Fowler, is listed at #3 on the preseason list of Top-5 Female Australian D1 freshmen players in America.

Quite a few superlatives for our Aussie additions.

Program looks to be headed in the right direction.

UP was up on Warner Pacific 54-16 at the half, but most of the starters were pulled in the 2nd quarter as the Pilots rolled, 78-36. Last week's WCC player of the week, Haylee Andrews, started but played just 1 minute and scored 4 points before being rested.

No sense looking at the stats as it was garbage-time throughout the second half, but it gave the coaches a chance to evaluate the reserves...and for the most part, the Pilots will be playing with a pretty short bench unless Rose Pflug and Josie Matz can recover from their knee injuries to eventually play this season...today they were both on the bench charting the plays and keeping stats, something Rev always had his injured players do.

Good atmosphere at the game today as there were 500-600 screaming youngsters in attendance...although that number dwindled some when the PA announcer said something about hot dogs in the refreshment area...

Much tougher test on Sunday at 1 o'clock against Fresno State in the Chiles Center.

Wow, today's 75-64 win over previously unbeaten Fresno St. was one the best UP women's games I've seen...and I've seen quite a few.  And don't be fooled by the final score, the Pilots lead by only 1 point with about five minutes to go in the game.

Fresno St. is good, perhaps one of the best teams UP will face in non-league play, and the Bulldogs took an early seemingly commanding lead, but the Pilots fought their way back with tenacious and physical play like I've not seen from the women's team in a long, long time.

The best player on the Fresno St. side had 150 noisy fans in from Seaside celebrating her 21st birthday, and she responded with 29 points, and a couple of twins from Arizona combined for 29 points, but UP's overall performance, led by Alex Fowler's 18 points and 14 rebounds, was too much for FSU's full-court pressing defense to contain.

The Pilots now go on the road at CSUN and Air Force before returning home the day after Thanksgiving for a 2pm games against Abilene  Christian...

It was not a good day for the Pilots as they lose to CSUN in Northridge.

Whether it was the noon start, the 1500 screaming middle-schoolers, or the absence of point guard Haylee Andrews, the Pilots started very slowly (down by 25 at one point), before making a game of it in the 4th quarter and getting to within six, but it was too little too late.

Next it's on to Air Force on Saturday on tired legs and at altitude, but with injuries mounting the Pilots are forced into using just eight players, so it's not going to get any easier.

With Josie Matz likely out for the year, Rose Pflug out indefinitely, and now Haylee Andrews out six to eight weeks, all due to injury, wins will be tough to come by unless someone on the teams develops and steps up very quickly.

Thank you for that update, DD. It was concerning to see the loss happen against a team that had yet to win a game, but the injuries help put things into context for me!

Good to see the women bounce back to beat Air Force on short rest and tired legs.

The Pilots started slowly, trailing after the first quarter, but finally overcame the early starting time and controlled much of the game.

When Air Force got within 6 or 7 late, the Pilots went on a quick 9-0 run to seal the win.

This was the first time I've watched the women's game on my phone while watching the men's game live...turns out I'm not as good at multi-tasking as I thought I'd be.

DoubleDipper wrote:Good to see the women bounce back to beat Air Force on short rest and tired legs.

The Pilots started slowly, trailing after the first quarter, but finally overcame the early starting time and controlled much of the game.

When Air Force got within 6 or 7 late, the Pilots went on a quick 9-0 run to seal the win.

This was the first time I've watched the women's game on my phone while watching the men's game live...turns out I'm not as good at multi-tasking as I thought I'd be.

Too early in the morning for you.

Us old guys are used to rising at the crack of noon.

The grit and never-say-die attitude of this 6-3 team is amazing after injuries have reduced the team to just eight scholarship players, and apparently there's little prospect of any of those injured players coming back this season with the possible exception of point guard Haylee Andrews and walk-on Kris Woolridge.

Senior guard Kate Anderson from Jesuit is the obvious team leader, but without the support of freshman Alex Fowler on the inside and a host of players who might be considered back-ups if the entire team were healthy, this team would be in deep trouble.

The WCC schedule is going to be very, very tough with the first three games on the road, including games against ranked GU and BYU.

DoubleDipper wrote:The grit and never-say-die attitude of this 6-3 team is amazing after injuries have reduced the team to just eight scholarship players, and apparently there's little prospect of any of those injured players coming back this season with the possible exception of point guard Haylee Andrews and walk-on Kris Woolridge.

The Pilots were up by 15 at the half, but PSU came out in the second half with a zone defense the Pilots couldn't shoot over, and every time they went inside with the ball UP's post players were double-teamed.  Forty-eight points in the first half, but only 23 in the second.

Woolridge and Andrews returned to action today, but Kris played only 2 minutes before being bothered again by her knee, and although Haylee scored 20, her legs just weren't there for outside and free-throw shooting.

Coach Meek is a very good coach and a wonderful guy, but the PSU coach adjusted and Mike didn't adjust to the adjustment!  Lesson learned....