Ah haw, it would seem you preferred the puppets.....

The title of this thread would appear to be a spoiler alert as to the subject matter.

The title of this thread would appear to be a spoiler alert as to the subject matter.

Oooh, double points for that one.... 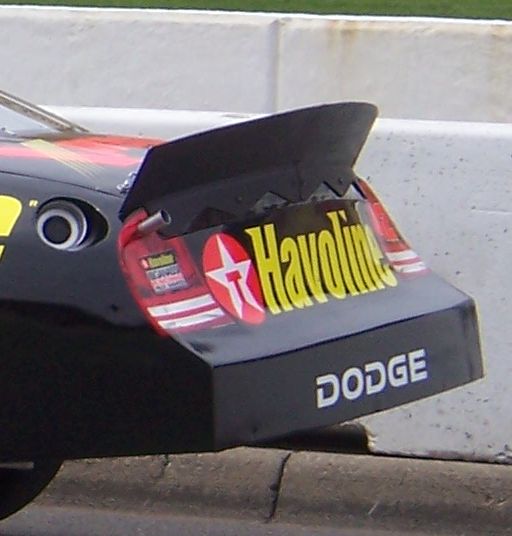 Although, this is the old style 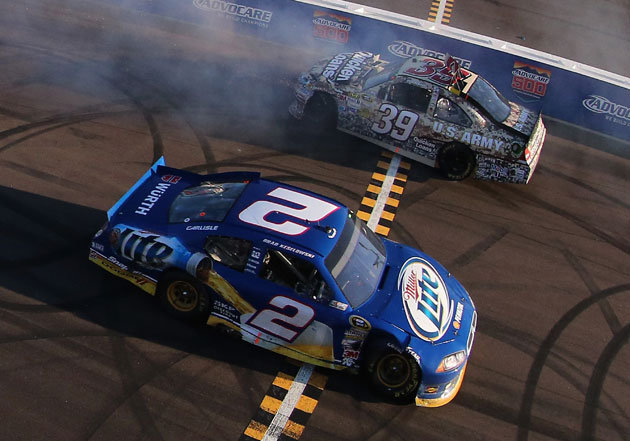 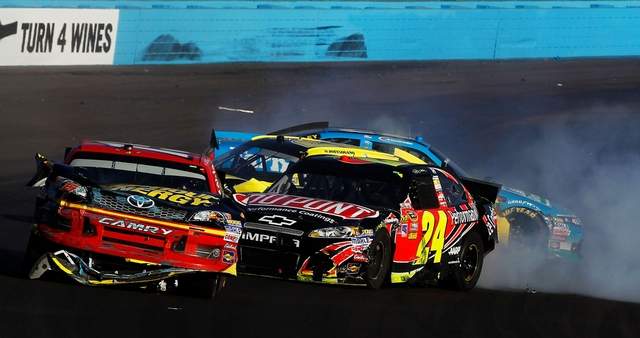 Which will just about cover the cost of the tires on the 20 or whatever cars he wrecked.

I know a number of states have laws against texting and driving, but NASCAR's rules are even more restrictive (and stupid too).

So, while Gordon loses $100,000 for his wrecking Clint Boyer, points leader Brad Keselowski ends up being fined $25,000 for tweeting from his car while parked during the red flag period caused by Gordon wrecking Boyer.

Which will just about cover the cost of the tires on the 20 or whatever cars he wrecked.

Actually, no suspension, no powertrain, and no aero package left on that car!

And Jeff Gordon and Clint Boyer come in 1 and 2 in the race without wrecking (each other).....who’d a thunked it?

Gordon wins, when many thought he shouldn't even be driving today. And Johnson ends up in the garage, after winning so many races due to miracle recoveries by his crew. Dodge wins the championship, as they exit the sport.

And local driver Biffle starts at the back in his back-up car. I don't think his name was mentioned once all day in the broadcast, and he finishes up in fifth place. He also finished fifth in the season ending standings.

Time to revive this thread! The pre-season kicks off Saturday night with The Sprint Unlimited (formerly the Budweiser Shootout), the race only open to drivers who qualified for a pole position last year. And then the week after, the real season starts with the Daytona 500!

Also, just read an article on ESPN that Indianapolis Motor Speedway is considering adding lights and moving the Brickyard 400 in July to a Saturday night race. How cool would that be! Seems the July sun on the aluminum bleachers at IMS has resulted in reduced attendance by 55% since 2006.

The best reason to attend the WCC Tournament in Las Vegas this year may be that NASCAR will be at the Las Vegas Motor Speedway March 8-10. 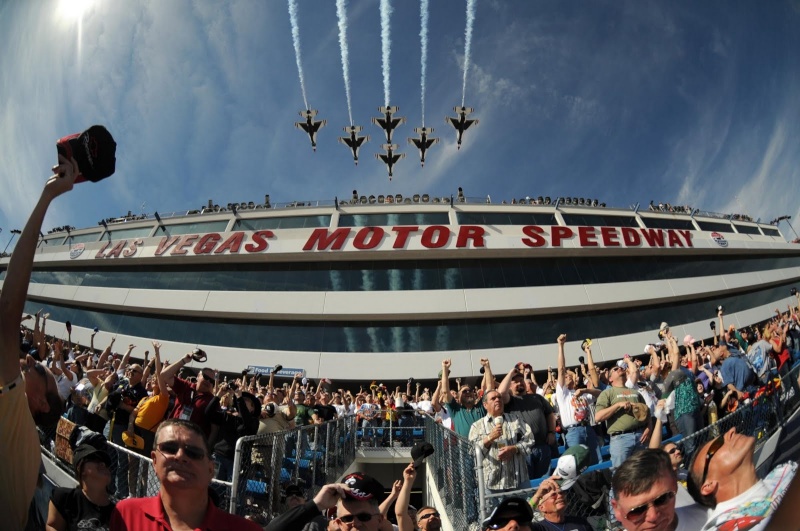 And the first wreck of the season, in Daytona practice, is in the books.

On Sunday, none of the boys was faster than the girl.

This will be Danica’s first full year as a NASCAR Sprint Cup Driver after making 10 Sprint Cup starts in 2012. Patrick still qualifies as a rookie for the 2013 season, and she's the first rookie to win the Daytona 500 pole since Jimmie Johnson in 2002. 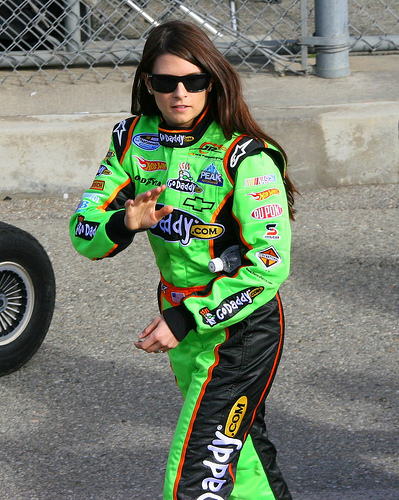 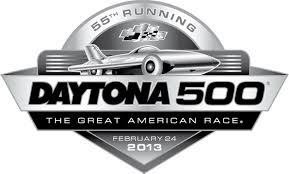 One of my two favorite drivers, Carl tied for the Nascar Championship in 2011 (it was awarded to Tony Stewart, who had more wins), but he was on a 70 race streak with no wins....so he needed this win for his sanity.

After wrecking FIVE of his race cars in the week leading up to the Daytona 500 last week, he was beginning to get recognition for all the wrong reasons.....now he's a winner again, and doing backflips off his #99 Subway Ford. 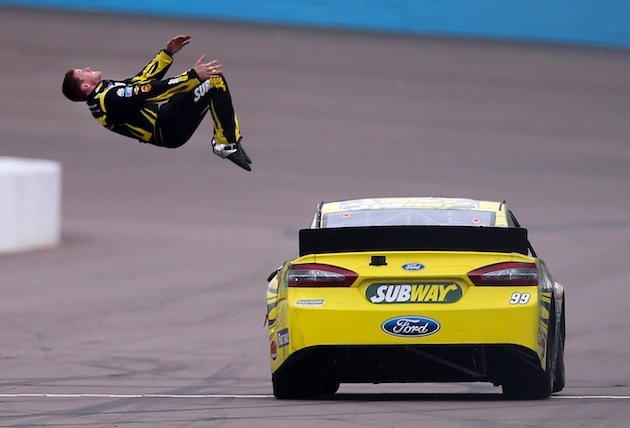 Now Edwards heads to Las Vegas, and not just for the WCC Tournament and golf, he'll be on the the 1.5-mile oval where his last previous victory came in 2011.

I don't watch much NASCAR, but I know Tony Stewart is a man of his word.

That had to be the best race at Fontana I've ever seen. Logano and Hamlin side by side for the win, after fueding and fighting last week, then wrecking as Kyle Busch goes shooting past them. Riveting action! And Tony Stewart charging Logano afterwards, and then providing a cuss filled post race interview while promising to "bust his ass" because Joey blocked him. Of course, Tony blocked Waltrip at Talledega last year and caused a 25 car wreck. But nobody's allowed to block Tony.

Props to Camas' Greg Biffle for starting in the back due to an engine change, and racing through the field all day to end up fifth.

Oh yeah, and Dale Jr. is in the points lead, and nobody was talking about it due to all the other drama.

PurplePrideTrumpet wrote:I don't watch much NASCAR, but I know Tony Stewart is a man of his word.

Yea, I’m a Tony Stewart fan, but sometimes his temper precedes his brain in his decision making. I guess he went after Joey Logano in the pits today for blocking him on the last restart….just looked like typical restart mayhem to me. 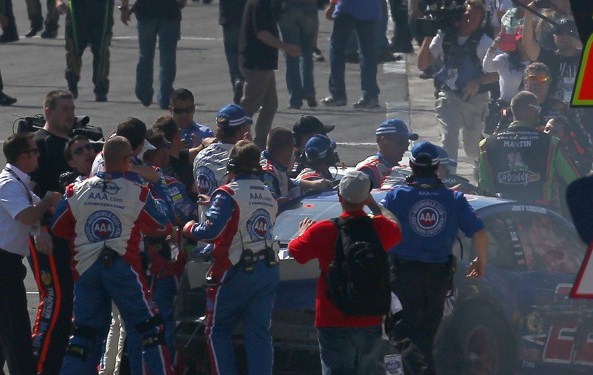 I used to attend the Fontana race every year, but the year I stay away it turns out to be one of the best races ever there. Again, I thought it was just hard racing that resulted in Denny Hamlin going into the wall during the final lap…..very, very scary. (Apparently Hamlin was alert after the race but was airlifted to the hospital with back pain). 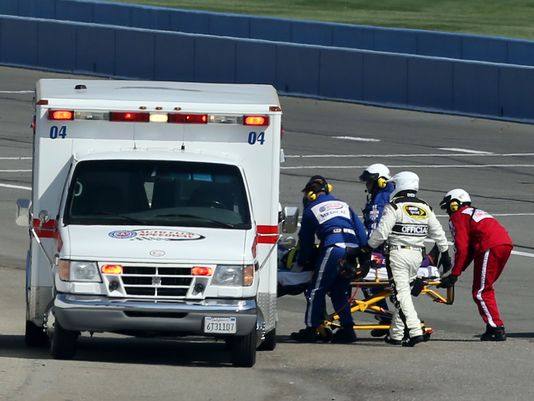 But Logano says, "That's what he gets," admitting he wrecked Hamlin to get revenge for an incident last Sunday when Hamlin turned Logano out of the race lead at Bristol Motor Speedway.....prompting an angry confrontation on pit road, followed by a war of words on Twitter....ooooohh!

It’s probably not over yet. That’s NASCAR!!

Finally!  After a one year absence from the winner's circle, Vancouver's own Greg Biffle wins the Michigan 400.

It was Biffle's first win in a year, but his second straight Sprint Cup win at Michigan International Speedway.  In today's race he easily held off Kevin Harvick after points leader Jimmie Johnson cut a tire and smacked the wall with just two laps to go. It was the 1,000th victory for Ford Motor Company across NASCAR's three national series -- Cup, Nationwide and Truck. 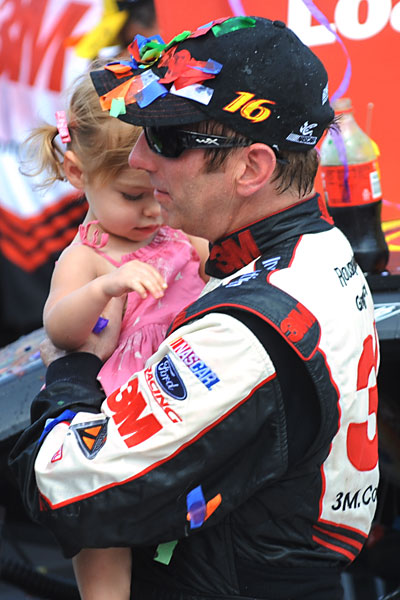 When MacMurray blew a tire and shredded his fender while Biffle was in the pits, I figured he was screwed and Johnson would be in the lead. But he ended up not losing a lap, and Johnson had a slow pit stop. Looked like Knaus miscalculated how much fuel was needed, or they didn't save enough earlier. Anyway, glad to see the Biff get a win

, and it didn't hurt my feelings when Johnson cut a tire with 3 laps to go

Another crash ending as they get to the finish line tonight at Daytona. 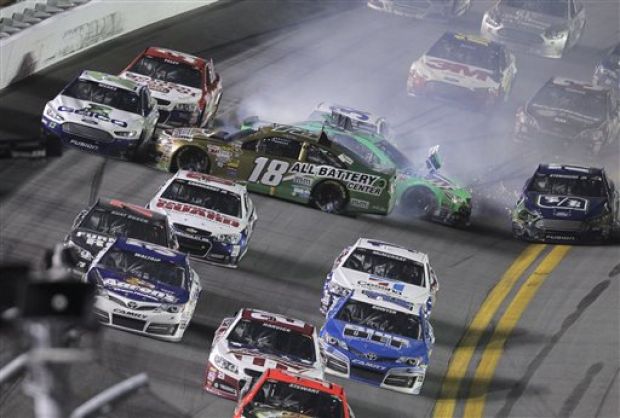 I badly wanted Danica to get another top-10 at Daytona (she finished 8th in January), but that’s restrictor plate racing….the cars are all bunched after a restart and no one wants to give an inch.

On Saturday night, the race was fairly clean until a six-car accident with 11 laps remaining prompted a red flag and the restart that appeared to finish off about half the field of race cars/drivers.