I had a milestone birthday this week, but didn’t really feel that old until it was announced that after 23 years of racing, 2015 would be Jeff Gordon’s last as a full time driver.

He’s got lots of money and a young family, but it just seems hard to believe that the onetime kid who was the new clean-cut face of racing and helped raise NASCAR’s image beyond its moonshine roots, is now old enough to stop racing full time.

Gordon’s 92 wins trail only Hall of Fame drivers Richard Petty (200) and David Pearson (105), and his fame reaches far beyond the track resonating with non-race fans too. He’s won all the big races, has collected four championships and had 58 victories before his 30th birthday.

I know who I’ll be rooting for this year….in addition to Danica, of course..

I've always rooted for Biffle as the local guy, but it was tough last year, as he was rarely competitive. I like Junior's sense of humor, but his over-the-top fandom based on who his father was puts me off. Maybe I'll have to root for Kenseth.

It could have been a magical start (would have said "ferry tail" if this weren't NASCAR) to the 2015 season with retiring Jeff Gordon on the pole for his final Daytona 500, and although he led the most laps, it was 24 year-old Joey Logano who won the race going away in his Ford giving the "Captain," Roger Penske, his 2nd Daytona 500 win as an owner.

Although there were a few tangles and crashes, including one that resulted in a green/white checker flag finish after the race was stopped to clear debris from the track, it was a pretty event free race....and unfortunately there were no lead changes over the final 8 laps to make it a nail biter.

Looking forward to seeing the boys (and girl) in Las Vegas a week from Sunday....it's a good thing BYU is in the WCC.

Interesting developments to the race. No Busch brothers; Kurt suspended and Kyle broke his leg. Stewart out early. I kept waiting for Danica to spin Hamlin.

Hendrick cars ran up front all day, but couldn't close the deal. That stretch where they were 3 wide 8 or 9 cars deep was crazy.

Hey, NASCAR fan(s), driver Jeff Gordon will be at the Oleans Casino in Las Vegas this evening @ 6. It's either that or watch Rex Walter's team take on UOP!

I mentioned that, and dad asked if he should know who Jeff Gordon was!!

up7587 wrote:I mentioned that, and dad asked if he should know who Jeff Gordon was!!

Haha, it probably won't help, but tell your dad that before arriving at the Orleans yesterday, Gordon won the pole for Sunday's race while setting a new track record of 194.679 mph.

Looks like all the race fans visiting Las Vegas will get their money's worth!

I have to admit to having a lump in my throat while watching live when Austin Dillon walked away from this frightening crash at the finish line of the Coke Zero 400 at the Daytona Speedway late last night (02:41 AM EDT).

Dillon finished 7th to Dale Earnhardt Jr.'s first, but many, including me, thought he was probably severely injured or dead after hitting the catch fence at approximately 190 MPH.

Dillon is said to have a bruised tailbone and elbow.  Four fans were treated and released at the scene, and one fan went to the hospital for treatment and was released a couple of hours later.  Phew! 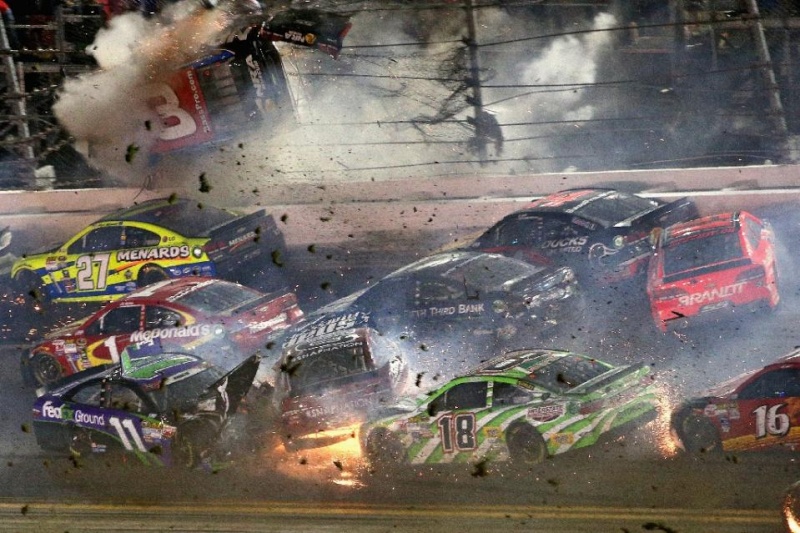 I hate rain delay races when I have my DVR set!

Couple weeks ago, Joey Logano wrecked Matt Kenseth when they were racing for the lead at Kansas.  Joey went on to win 3 races in a row, while Kenseth was knocked out of the race for the championship.

Logano won the pole and was leading at Martinsville today, while Kenseth got caught up in a wreck.  A few laps later, Logano was passing Kenseth to put him a lap down, and Kenseth pushed him into the wall and took him out. 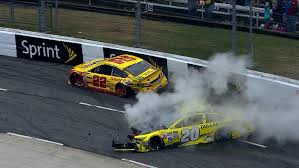 The crowd loved it.

You're correct, the crowd loved it, but as you said, in Kansas the two were racing for the lead....in this case Kenseth didn't have the slightest prayer of winning and took it upon himself to display the worst kind of sportsmanship and affect the championship....and I've always liked Kenseth.

I'm sure Kenseth and Joe Gibbs Racing will be fined, but NASCAR should come up with better ways to penalize and elimininate this sort of behavior.

Great and emotional win for Jeff Gordon. his 93rd, in his last race at Martinsville before he retires.....and now Jeff is into the final phase of the Championship.....could it be a story book ending?

I smile every time I see Gordon's 24 car, sponsored by AARP! 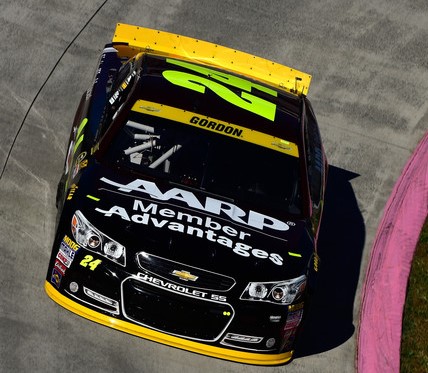 It really hurt me to root for Jimmy "Cheater" Johnson beat Kesolowski today.  But it kept B.K. out of the Chase for now. Harvick will probably win in Phoenix; not a fan. Not a Gordon fan either, I may end up rooting for Kyle Busch to win it all.

up7587 wrote:It really hurt me to root for Jimmy "Cheater" Johnson beat Kesolowski today.  But it kept B.K. out of the Chase for now. Harvick will probably win in Phoenix; not a fan. Not a Gordon fan either, I may end up rooting for Kyle Busch to win it all.

What?  You should be rooting for the #19, Cousin Carl.

I didn't care who finally won as long is was not someone in the final eight besides the #19 who is now in 5th place with at least a hope of advancing, even if he doesn't win the final qualifying race.

Yeah, I thought about Carl.  One of the Gibbs drivers should win; that group has been so dominant all year.

Not an especially exciting race today (they just kept going 'round and 'round), but an excellent result as #18 Kyle Busch (and Joe Gibbs Racing) win the race and with it the Sprint Cup Championship.

Not only is it Kyle's first championship (Gibbs' fourth), but he won it after sitting out the first 11 races of the season after breaking his leg/foot in an accident at Daytona.