This may be a thread I'll have all to myself; since Danica quit DD doesn't have much interest in NASCAR. Anyway, the season opener Daytona 500 is this Sunday. No Dale Jr, no Kenseth. Stewart, Edwards, Biffle all long gone. Jimmy Johnson is the old man. The cranky Busch brothers and Harvick still around. Truex, Kyle Larson and Chase Elliot among the season favorites. Kesolowski and Logano still around to lock horns with Hamlin.

Maybe I'll watch this year just to see if Stenhouse drives any better when he's not worried about running into his girlfriend.

The Vegas race in the same weekend as wcc tournament. Not sure if 7587 is willing to go with me again though!

up7587 wrote:This may be a thread I'll have all to myself; since Danica quit DD doesn't have much interest in NASCAR.

Oh, I have some interest in NASCAR, but the drivers that interest me are now all gone....except for Danica's final run at Daytona today....which means I'll still watch some of the races, but not with the biased interest I once did.

Not sure I like Danica's decision to also make one final run at the Indianapolis 500.  Racing at Daytona is fast and can be dangerous, but the Indy 500 with its open wheel cars and insane speed is always a danger regardless of the overall and recent experience of the driver and crew.  Danica hasn't raced an Indy car in seven years!

blacksheep wrote:The Vegas race in the same weekend as wcc tournament. Not sure if 7587 is willing to go with me again though!

I've been to a lot of races all over the US, but not since 1999 in Las Vegas because of the post-race traffic jam.

Las Vegas Motor Speedway is about 15 miles from the Strip, but wrestling with 110,000 beer filled people in a traffic gridlock that makes the 15 mile drive a three hour drive is not the race experience some enjoy.

But I do enjoy the Thunderbirds flyover!

So, lots of wrecks, including one on the 2nd to last lap resulting in an overtime. Aric Almirola was leading in the overtime, until Austin Dillon (Richard Childress' grandson, wonder how he got his ride) turned him and went on to win in Dale Earnhardt's old car number 3. Too bad. Ryan Blaney was the one most deserving of a win, led over 100 laps, but he made one poor move late and could never get back to the front.

After running as high as 12th (she started 28th), Danica was swept up in the first major crash of the race that took out 4 or 5 cars....after that I kind of lost interest in the Daytona 500 until the final 20 laps or so.

Not having a favorite in the race, I started rooting for Ryan Blaney until he dropped out of contention, and then Aric Almirola until he was wrecked by the eventual winner, Austin Dillon....all three drives should have a good season. 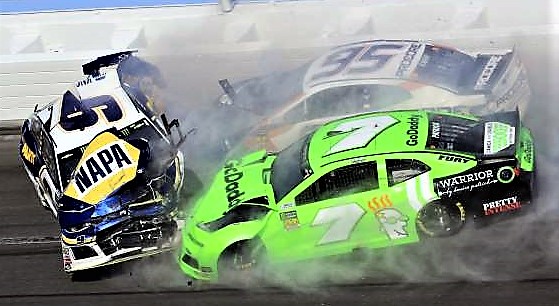 I did not watch today's race, but check out the crazy finish.  Busch into the wall twice on the last lap.

up7587 wrote:I did not watch today's race, but check out the crazy finish.  Busch into the wall twice on the last lap.

I watched the race...and it was fun, but I had to turn the audio off because of all the yelling and screaming by someone who seemed to be doing an perfect imitation of Daffy Duck...or was it Elmer Fudd?  This was NBC's first telecast of the season...hopefully they'll make some improvements in the booth.

Yeah, Larson hit the wall first, on his own, but then the fun really got good when both Busch and Larson started getting tangled up with lapped traffic and Larson did a little slide into Busch.

Larson was very gracious in his comments to the race fans after getting tapped into a four-wheel slide to the infield and finishing second.  Busch, on the other hand, is simply the rear end of a horse.!

If you are like DD, and can't stand to watch Neymar doing barrel rolls whenever someone brushes by him, don't forget the Firecracker 400 is this Saturday night. Now called the Coke Zero Sugar 400, it is the summer Daytona race, and always features high speeds, close quarter drafting, and big multi-car crashes.

I think a Ford will win.

up7587 wrote:If you are like DD, and can't stand to watch Neymar doing barrel rolls whenever someone brushes by him, don't forget the Firecracker 400 is this Saturday night.  Now called the Coke Zero Sugar 400, it is the summer Daytona race, and always features high speeds, close quarter drafting, and big multi-car crashes.

I think a Ford will win.

And that's another thing, why isn't it the gall darn Firecracker 400 anymore?  Not only are the drivers bathed in cool air and water to keep them cool when driving, they now drink Coke without sugar?

There are many signs that civilization as we knew it is coming to end, but this may be the final straw for NASCAR!

Yes, it's been a very good season for the Fords, but a couple of Chevy's will start on the front row, and the "Made in America" Toyota's always perform well at Daytona. So the final result could be as much about the driver and his luck at the usually crashed-filled Daytona track, as it is about the car.

Forty cars started, but only 20 were running at the end...that's restrictor plate racing at Daytona!

Really good to see one of the pressured "Young Guns" on Victory Lane....

I have not been following NASCAR as much this year (not because of no Danica). But there was a crazy race today, a race for playoff positions. A road course race, at Charlotte Motor Speedway (!?). On a restart with 6 laps to go, the leaders all drove too hard into the first corner on old tires, and several ran head-on into a wall. Kyle Larson's car was wrecked, the right front tire/suspension was broken. He had been comfortably in the playoffs, but going out would eliminate him. But he stayed on the track to try to keep alive.


On the last lap, Truex was leading Jimmy Johnson. Johnson, also solidly in the playoffs, went for the win, locked up tires in the final chicane, and wrecked himself, and Truex. Ryan Blaney ended up the lucky winner. More cars kept wrecking. Larson came limping in, bounced off the wall the to pass a wrecked car, and ended up in a 3-2ay tie with Almirola and Johnson for the last playoff spot. By tiebreaker rules, Johnson was eliminated from the playoffs, and '7 time' won't have a chance for an 8th.

I guess you have to give Johnson credit for going for the win, but in retrospect and the big picture, it was pretty dumb.

Joey Logano wins the NASCAR 2018 cup championship with a win in the final race at Miami. The final four playoff contenders finished in the top four spots in the race. Another championship for Team Penske.