I'm sure UP7587 was tuned-in to last night's Bud Shootout. If that race was any indication of what the NASCAR season will be like, it's going to be the wildest yet. And, we'll get to see Danica in a full year in the Nationwide series, and occasionally in the Sprint Cup series, including the Daytona 500 next Sunday.

When I can't watch Pilots Basketball, I know I can watch NASCAR!!!!!!!! 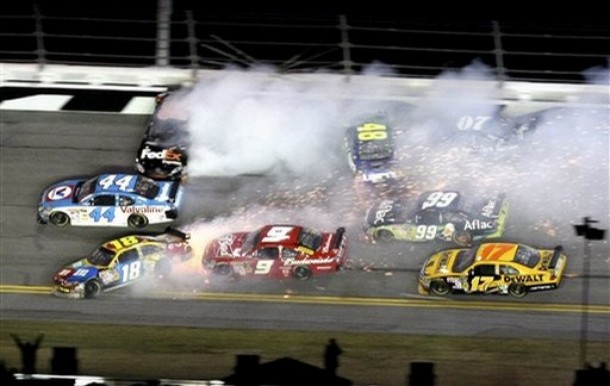 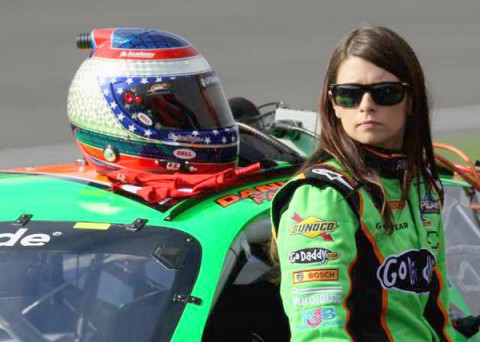 Looking at the top picture it is amazing to think that Rowdy saved that #18 car...twice!

Was out camping with boy scouts, but I think I taped it.

As someone else once said, PRIORITIES!!!!!

mattywizz wrote:Looking at the top picture it is amazing to think that Rowdy saved that #18 car...twice!

My apologies, wizz, I posted a picture of last year's race thinking I could get away with it! But, he did save it TWICE to WIN this year. Picture of #18 in this year's race below: 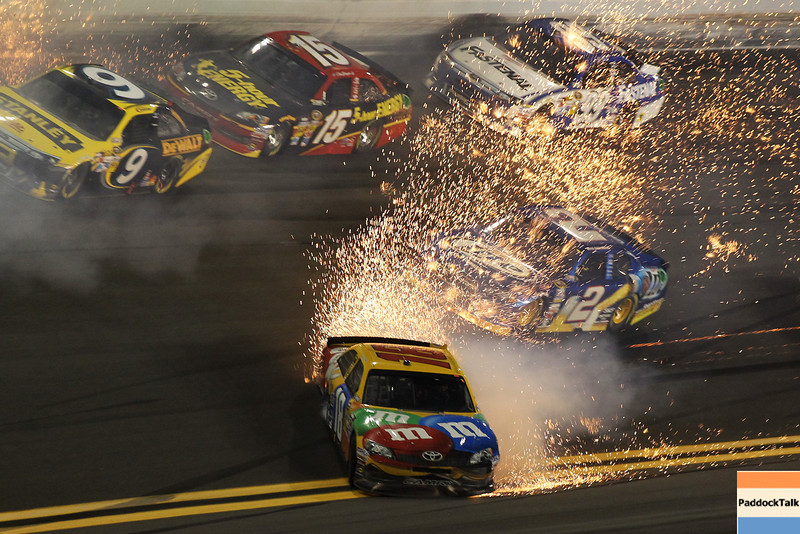 His most impressive move came when he was coming down the banking in Turn 2 and collided with Jimmie Johnson's Chevrolet. The contact turned Busch's No. 18 Camry onto the apron twice, as Busch worked furiously to regain control without correcting.

Though he might have "scared everyone half to death, including me," Busch also impressed Tony Stewart, who had a front-row seat for all the sparks scattering in the windshield of his trailing No. 14 Chevy.

"He had to catch it three times before he saved it," Stewart said. "There's a lot of guys that wouldn't have caught that. I'm like, 'Man, that's the coolest save I've seen in a long time.' " 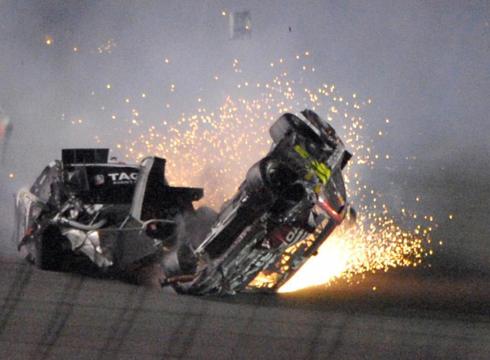 Jeff Gordon lead for a number of laps, but did a couple of barrel rolls after contacting bad-brother Kurt.

I would love it if we could talk NASCAR between basketball seasons!

I guess I should have noticed that the Rousch cars were in different sponsors and Kahne in the #9, but with Shrub sideways, I guess that is just what I focused on. I heard that is the first time Gordon has been on his hood.

Kind of interesting how the two man hookups couldn't do anything unlike last year when it seemed like any two could pull away from the field.

mattywizz wrote:Kind of interesting how the two man hookups couldn't do anything unlike last year when it seemed like any two could pull away from the field.

They specifically changed the cars to eliminate the 2-car tandem drafting. Fans found it boring.

Here we go! The season starts Sunday with the Daytona 500, and pack racing is back. Sure to be several big wrecks, as the guys (and gal) get to pushing in the corners and jumping from line to line.

I know some folks find car racing boring, but for me watching Daytona is 500 miles of tension, as the drivers basically never lift off the gas the entire race.

As for what to watch for, look to see how the engines hold up. There were several overheating problems in the preliminary events (they made technical changes to eliminate the two car hook ups, reducing the cooling capacity), and if the drivers can't keep them cool, they'll blow up.

up7587 wrote:Here we go! The season starts Sunday with the Daytona 500, and pack racing is back. Sure to be several big wrecks, as the guys (and gal) get to pushing in the corners and jumping from line to line.
I know some folks find car racing boring, but for me watching Daytona is 500 miles of tension, as the drivers basically never lift off the gas the entire race.

It is NOT boring! Considering the high speeds they run in door handle-to-door handle formation, the ever changing track conditions, the inability to see beyond the car in front of you requiring the reliance on "spotters" to tell you where the "enemy" is, and the closely coordinated teamwork involved on and off the track, it's like a military war exercise without the bullets. And it's not for sissies! 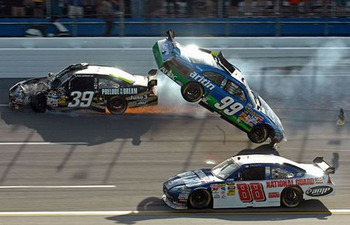 A rain delay! First time ever for the Great American Race. Set your DVR for 9 a.m. tomorrow. I can't tell you how long to let it run, because who knows. Mine is going for several hours.

So ... Is Blaney gonna win this thing? Looks like it might be a loooong red flag. What a bizarre decision by JP to crash into the back of the track drying truck full of jet fuel.

Could be! I pretty much posted a similar thought, but I put it on the wrong thread.

Have you ever seen a more bizarre Daytona 500? 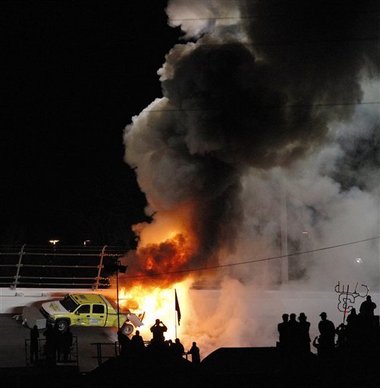 Kenseth wins! And Biffle gets passed by Dale Jr on the last corner to take 2nd place. Great showing for Roush-Fenway.

Definitely had to go to bed. Finished the last 40 laps today. Great to see my boy Kenseth lead the final 40 and especially the last one! Those Roush Fords had a great week.

Saw you at the race

Aw, the elusive 3 that Nem has been looking for all season.

Speaking of 3's, Greg Biffle, who grew up in Camas, has run 3 races, and finished 3rd each time.

Which, of course, makes the #16 Roush Fenway Ford #1 in the Sprint Cup standings. 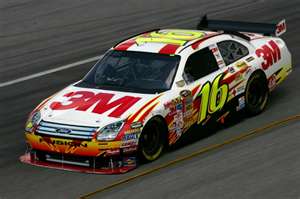 Our man Greg in the #16 upped his Sprint Cup lead with a win tonight at Texas Motor Speedway in Ft. Worth.

Man, have you ever seen so many green-flag laps in Texas? I doubt it!

Is NASCAR Racing a great sport, or what?!

Clint Bowyer and Jeff Gordon tangled late in Sunday's Sprint Cup race at Phoenix, leading to Gordon retaliating and igniting a brawl between their teams on pit road.

Before the day ended, both drivers were sequestered before NASCAR officials explaining themselves. Guards were stationed at the NASCAR hauler to prevent further conflict.

Ha. You didn't even mention everyone crashing as they crossed the finish line!

up7587 wrote:Ha. You didn't even mention everyone crashing as they crossed the finish line!

Yea, that was a cheap shot on my part.....the finish was great, but it could have been avoided if they'd gone yellow when Danica was forced into wall and was leaking oil all over the front straight.

Fortunate finish for Brad....it's his to lose now! 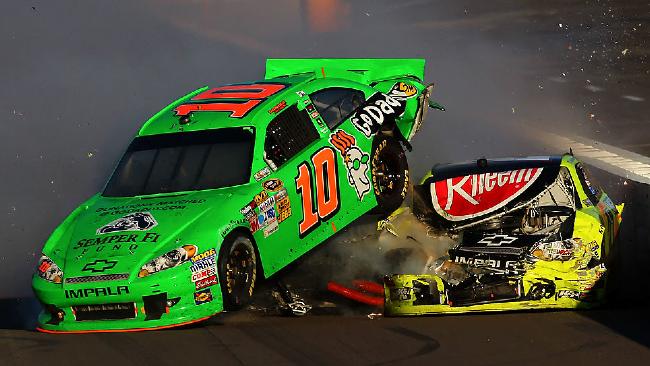