Another newcomer who impressed right away was Santa Clara grad transfer MileS Robinson, who looked like he could do anything he wanted on the left wing.

The trib had an article Tuesday which goes over some of the roster issues.

It more or less outlines the reasons for Arteaga playing center back and Pierre not playing.

Several other players won’t make an appearance either.

Sunday’s game against  Beavers has been removed from the Beaver schedule page.
They show their next match as against UW on the 20th and their entire remaining schedule being PAC-12 teams.

Geezaldinho wrote:Sunday’s game against  Beavers has been removed from the Beaver schedule page.
They show their next match as against UW on the 20th and their entire remaining schedule being PAC-12 teams.

As you wrote, the Beavers no longer have the Pilots on their schedule, but I was told there is a possibility the game could be played on Monday.

Really difficult to know what is going on during the pandemic, but I have to give a lot of credit to the players and staff for their patience.

The Pilots do indeed have the Beavs now on the schedule for today ( Monday) at 5:00 PM.

Geezaldinho wrote:The Pilots do indeed have the Beavs now on the schedule for today ( Monday) at 5:00 PM

I'm told the game today at 5 in Corvallis is on, as is the game against UW next week.

I also learned the Pilots have 14 injured players!!  Included in that number are four defensive starters...

Apparently a couple of roster players will be arriving from Europe to help and should be able to play in a couple of weeks.

OSU(2) and UW(3) both received first place votes in the PAC-12 coaches poll, with Stanford (1) receiving the other vote at the top of the conference.

So if these games come to fruition, it will provide good linkage with the rest of the NCAA in any post season tournaments, if there are any. It’s a bit of a shame it has to be so early with so many injuries, but there we are.

The beavs now acknowledge a match today at 5:00 with UP, and that they will host Gonzaga on the 13th.

There are stats, but apparently no video.

Cant wait for a match report.
Outshot, out cornered.

They had 5 yellows including a bench yellow.

The Sunday game against UW has been postponed due to wintry conditions...a makeup date has not been announced.  More crossed fingers.

In some good news for a team decimated by injury, Christoforos Kourtis, a midfielder and a transfer from Memphis, has arrived on campus from Cypress and has been cleared to play.

In more good news, Paul Odendahl has arrived on campus from Germany and will be ready to play after his seven day quarantine is finished.  Odendahl is a much needed defender and is a transfer from Coastal Carolina.

I was hoping for the snow angel bowl...

For those who were looking forward to tonight's game at Merlo against GU, it is NOT happening.

The game was dropped from the schedule last week and the Pilots will now play at Seattle U. on Sunday at 4pm. The game will be live-streamed on the WAC Digital Network: https://www.wacdigitalnetwork.com/

Seattle U. is scheduled to come to UP on Wednesday March 17 for a rematch in the midst of the WCC schedule, which for the Pilots begins on Sunday March 28 at 1pm at home against St. Mary's.

DoubleDipper wrote:Pilots will now play at Seattle U. on Sunday at 4pm. The game will be live-streamed on the WAC Digital Network: https://www.wacdigitalnetwork.com/

The Sunday game against Seattle U. has been canceled...COVID!

DoubleDipper wrote:Pilots will now play at Seattle U. on Sunday at 4pm. The game will be live-streamed on the WAC Digital Network: https://www.wacdigitalnetwork.com/

The Sunday game against Seattle U. has been canceled...COVID!

The UP site does not have a link to video for today's match, but there seems to be a link on the UOP site for those who are interested.

Yesterday the women played 110 minutes against USF with no scoring and today the men did the same against LMU.

Not soccer purest, this was simply not much fun to watch...especially when there were often 9 defenders in the box.

The highlight for the UP players had to be the appearance of the Villa Drum Squad...although not allowed into Merlo Field, they were loud and proud outside the gate between Merlo and the Chiles Center.

EDIT: I did not know the Lions were ranked #11 and were undefeated coming to Merlo...so not a terrible result for the Pilots.

The Pilots are now 1-1-1 in WCC play after beating GU in Spokane 2-1 off two first half goals including a PK by senior Luke Hendel.

Next up, on the road at San Diego next Sunday.

You have to love the Zag bulletin report on the match.

Got my tickets today for the two April home matches! Excited to get back to Merlo and see the boys in action. It's really hard to follow on video, especially the away feeds where they don't even really try to learn the Pilots' names. There is so much turnover in the squad this year that I just don't know them.

Pop-up game tonight at Merlo vs. Multnomah a 5pm.

No video, and not sure any fans will be allowed in, but at least the guys will have someone besides their teammates to kick in the shins. 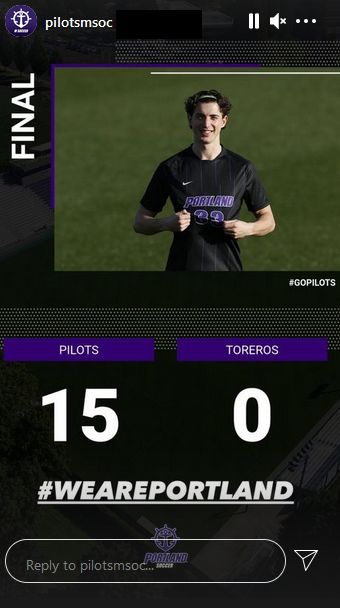