I think the return of freshman Kevin Ogudugu and the senior leadership of Josh Laguda in goal also played a big part in sparking the Pilots.

Nice too that the combined Army/Air Force ROTC cadets were formed-up to usher the UP players onto the field and that the National Anthem was sung live in what I consider the, "traditional" manner.

Good of both teams and the fans to observe a moment of silence for recently deceased UP freshman Owen Klinger...

I think Rey didn’t play because of yellow card accumulation. One has to wonder if he got one last game so he wouldn’t have to sit for a conference match.

Geezaldinho wrote:I think Rey didn’t play because of yellow card accumulation. One has to wonder if he got one last game so he wouldn’t have to sit for a conference match.

Nah, couldn't happen...that would be against the rules, wouldn't it?.

But yes, Rey accumulated his 5th card of the season at LMU...and I'm surprised he doesn't get even more cards for dissent, but the refs seem to be more and more okay with dissent.  In last night's game a Cal player yelled words at an assistant ref twice that would have gotten him a red card a couple of years ago.

On second thought, you probably don’t have to tell Rey to intentionally get a yellow.

I thought the ref, Frank Anderson, was pretty good BTW.
He is regularly an AR in MLS,  CONCACAF, and FIFA competitions. He was a WC AR.

It probably didn’t hurt that it was Cal, a team that plays soccer and not Cal Northridge.

I believe that the Timbers Army has selected this Saturday's match against Santa Clara as their annual match where they show up and support the Pilots.

I didn't see many Timbers Army people last night, but I did see another good performance from the Pilots. They are playing well right now, but it seems like they will need to win out to have any change of making the tournament.

The glancing header off a corner for the first goal was lovely. For once, the Pilots seemed to have more height than their opponent, and it paid off there. The second was a good debut goal for Ogadugu. It would be great if he could start getting more playing time and knocking them in.

The defense seems very solid right now and the midfield controls the game very well. The biggest problem has been finding someone to stick it in the net. Imagine how good they would be if Benji had stayed on for his senior season...

It's supposed to be in the low 40's at game time tonight and just a little warmer on Saturday night, but it's our last chance to see UP's seniors play at home in the regular season... 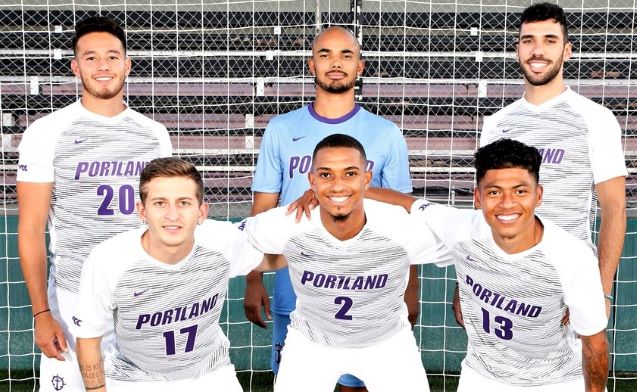 Oh, and if saying goodbye to the seniors is not enough inspiration to attend Saturday game, it's preceded by the Brewfest on the Merlo Field concourse beginning at 4pm.

At least the beer will be cold. Enjoy.

It didn't seem that cold to me last night. But then I wore four layers, had a wool blanket, scarf, stocking cap, and heavy mittens!

The Pilots made easy work of Gonzaga, despite not being at their best. Is Gonzaga the worst team we have faced this year? They were actually better in the second half after going down to 10 men, or maybe the Pilots took their foot off the gas. It hard to believe they have actually won two conference games ... against our next two opponents.

Win those and then hope for the best against St. Mary's.

Pereira's goal was a lovely strike from distance. If he could do that consistently, he'd be a real force. He is already good with the ball and a powerhouse at holding the ball up. It should have been his second as he missed a sitter from 6 yards with the net gaping a bit earlier.

Rey's goal was likewise a beautiful long shot. What was the keeper doing? He didn't move or even put up his arms, but the ball arced into the net directly over his head. The Hendel goal was a well worked cross.

It was good to see some of the bench players get a runout in the second half. No Greg Tracey; I hope he's not injured.

It was great to see Gio score early in his last home game, but the succeeding 88 minutes without a goal was frustrating for the players, coaches, and fans.

USF has only won 2 games this season, zero in WCC play, but as Nick said, "at this point in the season, a win is what we needed."

Two big road games coming up against USD and SMC on the next two Saturdays...the results of which will determine if UP goes to the postseason.

They seemed to have played down to USF’s level, and even though we dominated possession and chances, the threat of a fluke goal to tie or worse was always on the horizon.

Let’s hope they play above the competition from here on out.

That was a strange game. The Pilots totally dominated and controlled the first third of the game such that they had seven shots at the 26 minute mark. In the last 64 minutes, they only had eight more. We sat there wondering if there was some reason that they didn't knock the ball into the box with so many open opportunities throughout the game. It was as if they had decided that they were only going to take the perfect shot. As you said, that fluke was right there at times. As it turns out, SMC only beat USF 1-0, so maybe they aren't really as bad as a 2-win team would seem.

Disappointing performance indeed. It reminds me that this team really struggled to score goals early in the season. Arguably, the only goal of the match was a fluke; the keeper has a chance on Gio's strike if not for the major redirection off a defender.

Anyone know what's going on with Back (only about 10 minutes in each of the last two matches) and Tracey (none)? They have become an important part of the midfield core and will be missed if they are unavailable going forward.