We knew Coach Legans liked to start building relationships with young ballers at an early age, and he continued that today by offering a couple of Florida 15 year-old freshmen their first college scholarships. 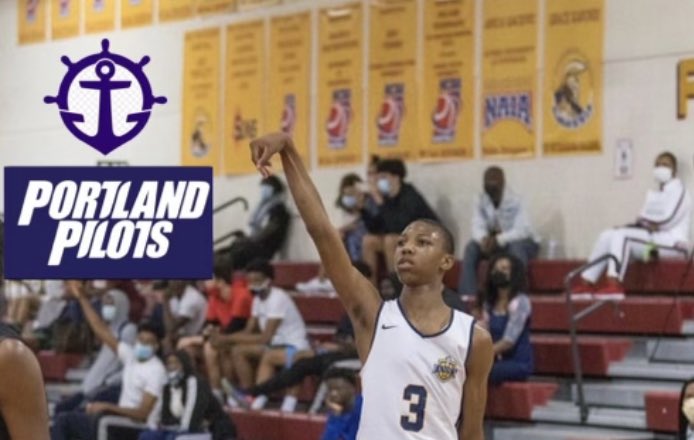 By the uniform, it would appear he plays on the same club team as Kameren Wright. 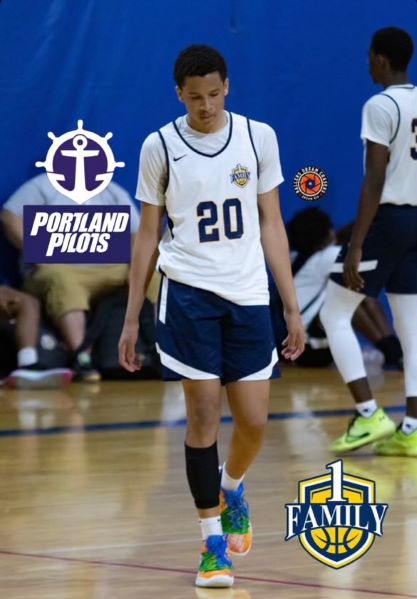 He is not yet quite the 6-10 player StudentPilot was look for, but apparently Vuk Lazarević a 6-9 freshman PF going to Admiral Farragut Academy in St. Petersburg, Florida, has been offered by Coach Legans after returning from his trip to Serbia.

If that name sounds familiar, it might be because Vuk Lazarević was a Serbian prince born around 1380 who, after the Battle of Kosovo in 1839, and along with his siblings and mother, began to take part in the control of Serbia. In the Battle of Ankara in 1402, Vuk was part of the Ottoman vassal army of his brother against the Timurid Empire, but as I recall from my sophomore Eastern European History class at UP, the Timur won that one in OT.

Sadly, Vuk was executed in 1410 for betraying his older brother... 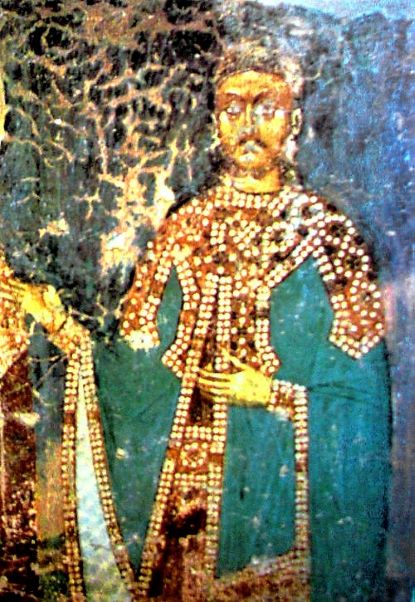 Sorry, this is the most current picture of Vuk I could find, although there is a video available of the 6-9 Vuk when he was no more than a skinny 6-footer.

This picture of Vuk Lazarevic is over 600 years newer than the one I posted earlier today: 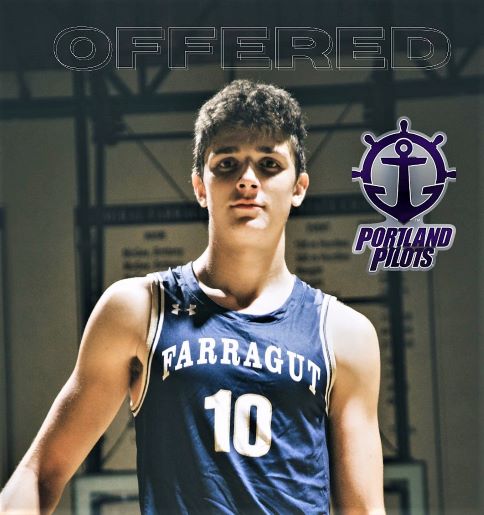 This video is too long, but it is a fun comeback by Curtis and Diallo against Timberline and sophomore Brooklyn Hicks (also offered by Portland).  #4 Hicks scored 36, but #15 Diallo had 19 points, 10 rebounds and 9 assists in the 20 point comeback by Curtis, including a buzzer-beater.

Good to see no chins were exposed to COVID during this game...

Taj DeGourville wrote:Blessed to receive a Division 1 offer from the University of Portland

Continuing to begin relationships with student-athletes early in their high school careers, UP has offered Taj DeGourville a 6-4 SG from Las Vegas. 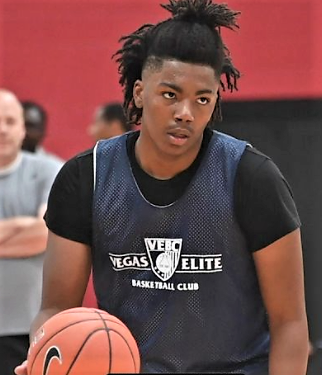 Pretty mature look for a 9th-grader!

A few days ago UP offered Class of 2022 6-8 PF Jac Mani from Beverly Hills, and today the coaches apparently offered his brother, 6-4 SG Jon Mani...going into the 10th grade in the fall.

Seems a good recruiting strategy that worked for Coach Legans at EWU.

Another kid who will be a 10th grader in the fall, 6-7 SF Jai Anthoni Bearden, from Glendale, Arizona has been offered by UP.  He's 15 years-old!


EVision wrote:2024 @jaianthoni  has received an offer from Portland

And yet another rising sophomore has received his first D1 offer from UP, 6-4 SG, Liam Campbell, now living in Idaho after moving from L.A.

This highlight video of Liam is from 2 years ago...when he was just 13 years-old!

After landing in the top-25 in the ESPN rankings, Zion Sensley (@ZSensley) has been offered by Portland.

2024 prospect who also holds offers from Washington State and Hawaii.

After landing in the top-25 in the ESPN rankings, Zion Sensley (@ZSensley) has been offered by Portland.

2024 prospect who also holds offers from Washington State and Hawaii.

Zion Sensley, a 6-6 15 year-old from San Francisco, is also a popular social media star who is best known for the lip sync and dance videos he posts to his lightskinzion TikTok account...he has over 120,000 followers on the platform.

The staff continues to look ahead for the just right point guard, offering 6-2 Styles Phipps from Phoenix.

6-10 or 6-11 (depends on the source) center Austin Maurer from Medford tells us he's received his first D1 offer from UP.

StudentPilot wrote:6-10 or 6-11 (depends on the source) center Austin Maurer from Medford tells us he's received his first D1 offer from UP.

I have read a lot of positive reviews about young Austin after his summer of basketball in Arizona and would imagine some big-time colleges will be after him before too long.

Some might remember Austin’s dad, Marty, from when he was a big starting tight end at OSU a little over 20 years ago.  Austin's grandfather, Andy, played for the Ducks in the late 60's, as I recall, and then in the NFL for almost 10 years. 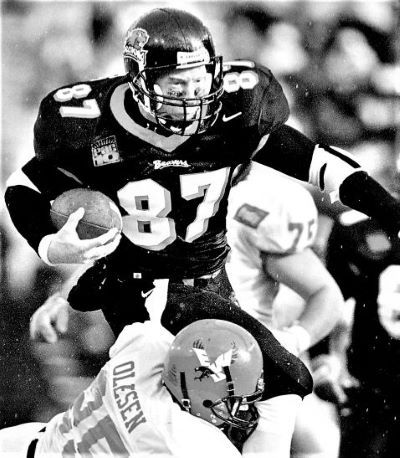 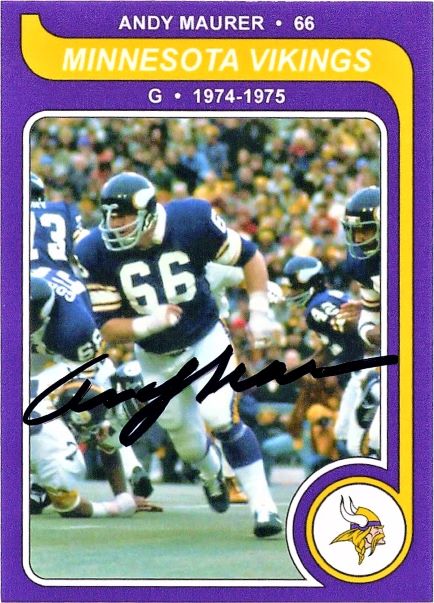 Virgil, a sophomore at Modesto Christian in California, is already 6-4 and expected to get quite a few more offers in the next three years. 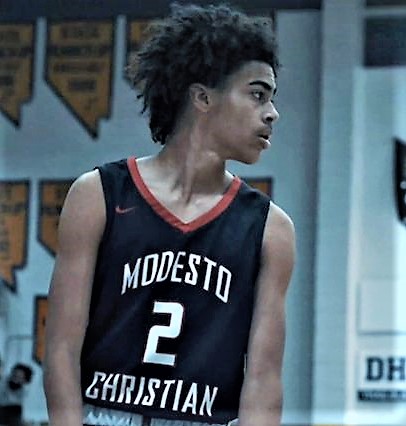 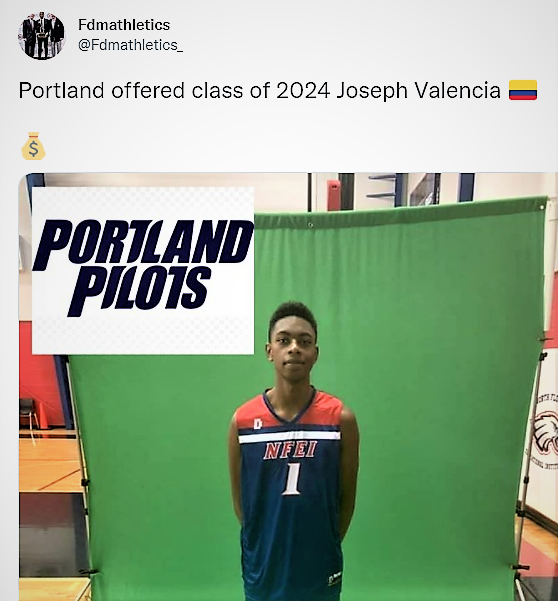 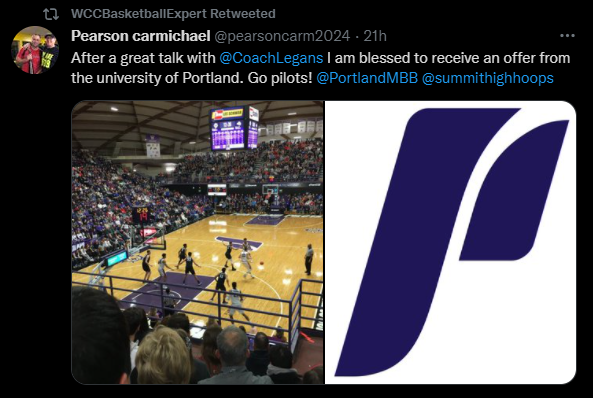 There's a little more to the story on Carmichael.

His high school team, Summit, is from Bend, Oregon, and I think they came into today's OSAA 6A Championship game in the Chiles Center with a 27-0 record, a 36-game winning streak going back to last year, and were ranked #2 in the state before losing to Tualatin in the Championship game today.

I watched Carmichael yesterday (Friday), and he definitely has some potential, but I find it difficult to accurately judge a skinny 6-6 kid with little muscle definition who might not even by driving yet.

I do not know how Carmichael did today, but yesterday he came off the bench to score 12 points in 15 minutes including 2-5 from 3-pt., with 4 boards, and his team was 12-24 from behind the arc. 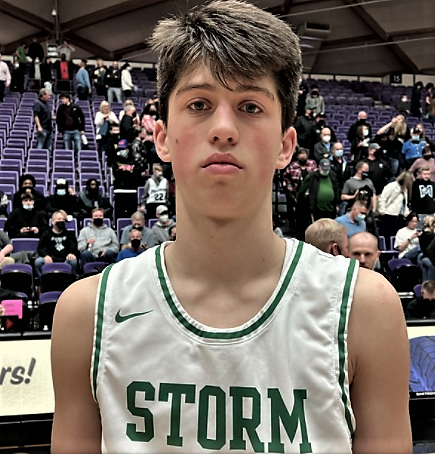 Dayton Forsythe, a 6-2 guard in Oklahoma, led his team to the 2A Championship by scoring 37 points in the "best game of his life" last Saturday.

UP has offered 6-5 combo guard Hunter Carter from Anna Wright HS in Tacoma.

It is his first D1 offer. 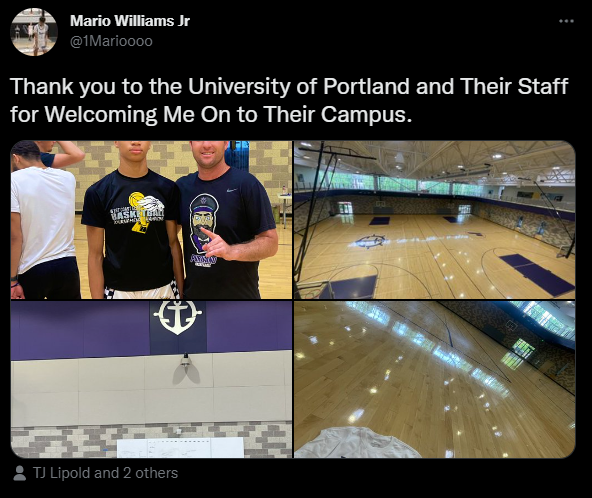 Not sure Mario Williams is being recruited by the Pilots, but he is/was on campus for "Elite Camp" in the Beauchamp Center.

Certainly not an official visit, that would not be allowed until January 1, 2023 under current NCAA rules...

I think yesterday was a big day for 2024 recruits. Seems like the first day you could officially text/call them in some way or another?

Four new names for this thread that the Pilots have apparently extended offers to:

PG Dayton Forsythe, Dale HS (also offered by the Central Oklahoma Bronchos. Which I mention mainly because I have no clue why they spell it Bronchos) 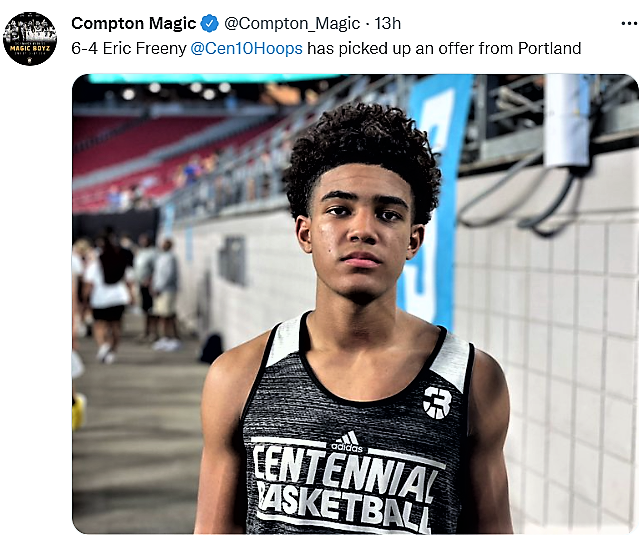