Not sure which game was more exciting, GU's OT win over UO, or the #14 Arizona game with Pepperdine.

The game was tied at 42-42 at the half and it was still tied at the 7 second mark after PU had taken the lead a couple of times after being down by 12, but a length of the court lay-in at the buzzer won it for the Wildcats, 93-91.

Skyler Chavez, the JUCO kid I wanted UP to recruit, had 20 points for the Waves.

In the follow-up games, Oregon played North Carolina tough, losing 78-74. GU got blown out by Michigan 82-64.

TRENDING UP
Pacific: Thumped SIU Edwardsville and Longwood by enough to jump up 25 spots in the Kenpoms from last week.
Loyola Marymount: Decent home win over Southern Utah yesterday.
BYU: Starting to make bubble noise after wins over UCLA and Virginia Tech in Hawaii this week.

ABOUT THE SAME
Santa Clara: Hosted the Cable Car Classic and won all three games, but against Denver, SE Missouri State, and Cal State Fullerton.
Pepperdine: Lost to Arizona, UCF, and Providence at the Anaheim tournament but put up enough of a fight in two games to stay right around the 120-125 mark in the rankings.
San Diego: Won over Hofstra, but started off their Boca Raton tourney with a loss to St. Bonaventure yesterday.
Saint Mary's: Nice home win over a good Utah State team on Friday and survived Omaha yesterday. Huge game against Dayton upcoming.
Portland: Unimpressive against Incarnate Word, but at least it was a W.
San Francisco: Beat Hampton at home, but the win streak came to an end at Hawaii.

TRENDING DOWN
Gonzaga: It's not overly fair to put them here after a nice win over Oregon, but the early rankings didn't like Michigan running away with the Atlantis final over Gonzaga. This is more of a product of Michigan being much, much, much better than expected.

STAT OF THE WEEK
If you rank all of the 353 D1 teams by current strength of schedule, three WCC teams are in the bottom 11 - Pacific at 343, Portland at 349, and Santa Clara at 352. Coincidence, or an expected result of the "WCC scheduling enhancement strategy" put in place last year? You be the judge.

I'm up late working. Anyone else watching the USF-ASU basketball game? The Dons are playing an impressive and competitive match against the Sun Devils. Tied at 64 with 3:25 to go currently. I was questioning the Dons' SOS, but this might be a quality win/loss for them at the end.

Also, War Memorial Gymnasium is looking amazing. They really have put a lot of money into upgrading that facility.

FloridaPilot wrote:I'm up late working. Anyone else watching the USF-ASU basketball game? The Dons are playing an impressive and competitive match against the Sun Devils. Tied at 64 with 3:25 to go currently.

I jinxed them. ASU won 71-67. Still was an impressive game from the Dons.

FloridaPilot wrote:I jinxed them. ASU won 71-67. Still was an impressive game from the Dons.

Owing to USF's impressive start to the season, despite the 10 point loss in Honolulu after winning their first seven games, ASU was favored by only 1 point in the game...

In back-to-back games, the Dons take on Cal in War Memorial on Wednesday night and are favored by 8.

StudentPilot wrote:In back-to-back games, the Dons take on Cal in War Memorial on Wednesday night and are favored by 8.

That's a pretty large margin over the Bears, but Cal has been struggling even when winning, despite having the 3rd best 3-point shooting percentage in the country at 43.4%

The University of Portland Pilots are the #1 team in the country, shooting 46% behind the arc.

DoubleDipper wrote: . . . Cal has been struggling even when winning, despite having the 3rd best 3-point shooting percentage in the country at 43.4%

The University of Portland Pilots are the #1 team in the country, shooting 46% behind the arc.

For comparison purposes, UP ranks #258 in FT% at .669. Pepperdine is #2 at .847. That variance amounts to 3 points per game the Pilots lose due to poor FT shooting; maybe more considering front end 1&1 misses. D is atrocious in this stat, under 50%; a big liability at the end of a close game. And JoJo needs to pick up his performance; he is 54% on 3Ps, and only 61% on FTs. How is that possible?

Do you suppose the difference is one outlet uses all stats and one uses only D1 game stats?

Although it's nice to be #1 in something, I'd rather see UP give up some 3-pointers to grab some rebounds and make free-throws.

This was easier to do while the Pilots were still on a winning streak!

TRENDING UP
GU: Picked up a nice resume-building road win over Washington yesterday. Next two games (at Arizona and agianst UNC) are important.
PAC: Jumped up 21 spots in the Kenpoms this week, mostly because of a road blowout over a puzzling Long Beach State team.

ABOUT THE SAME
USF: Split with two Pac-12 teams at home, losing to ASU but beating Cal on back-to-back nights.
PEP: Put away Idaho State in the second half for a home win on Friday.
SCU: Thumped Cal on Saturday, but were pummeled at Nevada earlier in the week.
LMU: Lost to Colorado, beat Grambling.

TRENDING DOWN
SMC: Fell behind early and lost to a strong Dayton team yesterday. Gaels were down 40-18 at one point and will likely be punished by the bracket experts for a lack of competitiveness. Look for them to be a 9/10 seed in this week's projections.
BYU: Cougars were getting lots of love after their Yoeli Childs-less performance in Hawaii, but fell in OT to Utah on the road in his season debut.
USD: Gave up a 25-3 first-half run to Illinois Chicago in a Monday loss to the Flames.
UP: Lost two winnable games, but still have a chance to go into Hawaii at 9-3.

The WCC went 12-0 this past week. Impressive!

Lunardi's bracketology now considers the WCC a three-bid conference. Gonzaga a 1 seed, SMC a 10 seed, and BYU as a play-in 12 seed as the last team in the field.

▲
Gonzaga: They're doing it again. Road win over Arizona and will likely be #2 in the AP poll today.
BYU: Nice rivalry win over Utah State has BYU firmly on the bubble.

►
St. Mary's: Road win over Cal. Can't really afford any losses in the next five games starting with Wednesday at ASU.
San Francisco: USF has a interesting opportunity this week against a Stanford team that today's first NET will have ranked far higher than any other metric.
Santa Clara: Squeaked one out over Sac State to join the 10-win club.
Pacific: And speaking of the 10-win club, Pacific got there with a home win over Northridge.
Pepperdine: Home win over Central Arkansas on Saturday.
Loyola Marymount: Up to .500 on the year with a win over Prairie View A&M.
San Diego: After a home win over Davis, now will take on that weird Stanford team on Saturday after USF has a go at them.
Portland: Hooray, a win over Evergreen State!

First NET of the season is out. Here's where the WCC teams slot in according to the quadrant system (i.e. BYU is a Q1 game for the Pilots in Provo and a Q2 game in Portland)

10 of Gonzaga's 31 regular season games currently fall into the Q4 category. Only two of these are WCC games, with the other eight all scheduled by Gonzaga as part of non-conference play. And of those eight games, seven are against teams ranked lower in the NET than any WCC team is.

Tell me again how moving to a 16-game schedule has improved Gonzaga's ability to schedule tougher overall? The major anticipated outcome of the "WCC scheduling enhancement strategy" was rendered obsolete the minute NCAA moved from RPI to NET, and I'm guessing there will be a large push this spring to return to a true double round-robin WCC schedule.

And the best part - one of the two games Gonzaga won't play this year is at Pacific, which would have been a Q2 opportunity for them as the NET currently stands. GU only has 10 projected Q1/Q2 games at the moment, and (if they don't just win out) you better believe that's going to hurt them at the end of the year when many of the teams they're being compared to will have in the neighbourhood of 20 or more.

By comparison, here's how KenPom ranks the teams in the WCC, now the 9th best conference in the nation behind the Big 6 and the AAC and Atlantic 10. 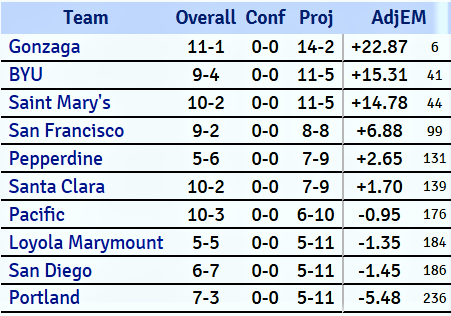 Encouraging that KenPom predicts UP could have 5 conference wins...I think most of us will take a wait-and-see attitude toward that.

One other WCC game tonight: LMU played at UC Davis. and had a 14 point lead at halftime. But Davis made a 3 pointer at the buzzer to win 67-65.

It probably should have been worth at least 6 points!

BTW, I've already written the UCD athletic director about the player prominently displaying a white power hand symbol on the UCD MBB twitter page...I'll let you know if he responds.

Two WCC teams played tonight.
USF went to Stanford, and led for 35 minutes, holding them to 18 first half points and leading by 6 at the break. But Stanford rallied at the end to win 64-56.
PU hosted Portland State, and trailed 32-38 at half. But they prevailed in the 2nd half and won 77-71.

This was the picture at the top of the UCD MBB twitter page until today.  It shows a player displaying what is considered by some a symbol of white-power, replacing other more innocent meanings of bygone days.

Today the picture was edited with this excellent explanation from the UCD AD, Kevin Blue...

Thanks for the email. We will change the photo.

The players (of all backgrounds) had been using a hand signal to celebrate three-pointers that we learned resembles the controversial symbol you mention. We have tried to remove photos of this, and missed it in this case.

Thanks for your email and understanding.

Being a white power symbol is bull$#!t.  That is a story started by trolls on 4chan, and they've gotten people to buy into it.  I thought you were joking. 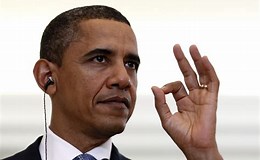 UNC exploded for 81 points against the Zags, the most points they have scored all year.


Unfortunately for them, that was 14 points shy of a win.

Pretty much in the same category as UP's loss to Jackson State!