Note the early start, so old guys *cough* DD *cough* can get home in time to watch the Times Square ball drop in NYC.

The Waves come to town, with an eight game losing streak and losses in 9 of their last 10 games. They are 4-9 overall.  They are led by Sr. Lamond Murray Jr, who is scoring 19 ppg, shooting 49% from 3Pt.  Sr. Amadi Udenyi is out with a torn Achilles heel (he is applying for a medical redshirt 5th year). Other key players are Srs. Chris Reyes and Jeremy Major.

Pilots need to make sure no other players have a break out game.  They beat PU twice last year, mostly controlling Murray.

So, will Hartwich play better, or will Barreno start playing again regularly?  The coaches are going with D'Marques as the fourth scorer; he also got 6 rebounds last night.  For other subs, there's Maker, Smoyer, Jackson, Ferguson, pick two.

This is a game Pilots need to win; a home game against a struggling conference foe.  No students, so hopefully the kids they let in free make some noise.

up7587 wrote:Note the early start, so old guys *cough* DD *cough* can get home in time to watch the Times Square ball drop in NYC. 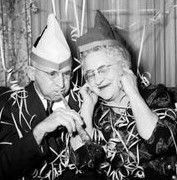 Jarrel still not available for action, but last night he had the walking boot off and the ankle heavily taped.  Didn't have a chance to talk to Xavier, but he too was not in uniform.  Apparently Rashad, Alec M., and Joseph were healthy at UOP...just didn't play.

Haha.  DD explains that you are supposed to stand in as the 'I' for pictures.

Haha.  DD explains that you are supposed to stand in as the 'I' for pictures.

But it looks dumb when no one is standing there. Maybe they can be put the "I" back during TV games?

Observations about the game:
The short bench continues, with only 2 subs, Barreno and Maker. Alec and Jazz both played 40 minutes.
FT shooting settled in at 72%, 13-18. Good thing Alec was 8-8.
3Pt shooting was 45%, with Jazz and D'Marques both hitting 50%.
Pilots outrebounded PU 36-34. Margin would have been more, but PU got 14 offensive boards to 4 for UP. I guess PU got more O-RBs because they had more misses, only hitting 30% of their shots.
Alec got a few traveling calls when starting to drive. We fans protested one during the game, but I watched it in slow motion, and he slightly shifted his pivot foot before dribbling. Good call.
After only 2 TOs on Thursday, they made 14 against PU.

Important win. Home game, against a struggling team, after a Thursday road game. Pilots need to win those to meet their aspirations to be in the top 4 or 5 teams in conference.

A quicker paced game than on Thursday against UOP, but still not the race horse pace of many of the preseason games that could wear out any 40-minute men.

Kudos to Jazz for going 40 minutes when earlier in the day there was concern he would not play at all due to a "heavy cold."
The coaches threw in a few new wrinkles last night.....when Ray was in the game the team used a lot more high post moves and ball screens with as many as four players in motion.  I like it....it can eventually create back door looks and open lanes to the basket. As the rotation settles down to 7 or 8 players (I still count Jarrel in the mix), we are seeing the team beginning to jell and the coaches adding a few nuances.

Excellent combined inside play from Ray and Philipp....in addition to their 15 rebounds and 6 block shots, they altered and redirected a number of shots and passes, significantly lowering PU's shooting percentage.

The personal highlight for me was Chier hitting the 3-pointer from the corner....his first of the season.  The guys on the bench loved it too as they flew out of their seats.

The predictors are predicting UP will go 1-5 in their next 6 games....so these two opening wins were important.

Wintering has a strong case for WCC Player of the Week.

Other strong contenders: Mika at BYU (avg 18pts, 9.9rb), Haws at BYU (18.5pts, 5asts), Karnowski at GU (17.5pts, 6rb). Mika's already won the award twice this season, and Wintering's numbers were better than all these guys, so maybe the nod will go to Alec.

Does anyone know who makes this decision each week? Is it a vote of the coaches? Someone at the WCC office decides?

NoPoNeighbor wrote:Does anyone know who makes this decision each week? Is it a vote of the coaches? Someone at the WCC office decides?

Players are nominated by their schools (typically via the Sports Information/PR staff), and then the conference staff picks the winners. Usually they try to "spread the wealth" over the course of a season among the different schools.

NoPoNeighbor wrote:Wintering has a strong case for WCC Player of the Week.

@PortlandPilots wrote:Congrats to Alec Wintering on being named the men's basketball High-Major National Player of the Week by @CSMadness!

It appears to be a terminology thing? They seem to have the following Categories:

Alec gets the WCC POW! Congratulations!

Excellent! 0 turnovers in the game against Pacific was a big deal.

dholcombe wrote:It appears to be a terminology thing? They seem to have the following Categories:

Think of it as major inflation...sort of like grade inflation.