COMING UP
• Portland (6-20, 3-10 WCC) concludes its Southern California road trip on Saturday against Pepperdine (8-18, 2-12) in a game that will go far in determining seeding for the Zappos.com West Coast Conference Basketball Championships.
• Tip-off is scheduled for 7 p.m. at Firestone Fieldhouse and the game will be televised live on FSN Prime Ticket and tape-delayed on CSN Northwest at 11 p.m. Paul Sunderland and Mitch Butler will call the action.
• The Pilots are one spot ahead of the Waves for seventh place in the league standings after a heartbreaking 78-75 overtime loss at San Diego on Thursday.
• All Portland basketball games will be broadcast live on True Talk 800 AM, with a 30-minute pregame show. Bill Johnson will provide the play-by-play and an audio simulcast will also be available on www.PilotsVideo.com.

ABOUT PEPPERDINE
• The Waves (8-18, 2-12 WCC) dropped an 81-70 non-conference road game to the Seattle Redhawks on Thursday.
• Seniors Taylor Darby and Corbin Moore scored 20 points each in the loss.
• The Waves have lost five in a row and 13 of their last 14 outings.
• Pepperdine’s biggest wins this season have come at Arizona State (66-60) and at home versus Hawaii (73-67).
• Pepperdine is last in the WCC in points per game (58.9) and field goal pct. (.393), but is fourth in points allowed (65.9).
• The Waves are led by Darby (11.8 ppg, 5.8 rpg) and Moore (10.3 ppg, 8.5 rpg).
• Six players are averaging six or more points in Pepperdine’s balanced offensive attack.
• Portland defeated the Waves by a 53-43 margin on Jan. 7 at the Chiles Center.
• Former Pepperdine guard Marty Wilson is in his first year as head coach of the Waves after serving as associate head coach under Tom Asbury the last three seasons.


LINEUP NOTES
• Senior PG Eric Waterford (knee) is doubtful for Saturday.
• Sophomore C Riley Barker has missed the last 19 games (knee) and is out Saturday.
• Head coach Eric Reveno has used nine different starting lineups this year.
• Sophomore Ryan Nicholas is the only Pilot to start all 26 games this year, while 11 different Pilots have started at least one game.
• Three different freshmen have started at least four games.

Buried in the notes: tape-delayed on CSN Northwest at 11 p.m.

So, you've got to make a decision; do you want to know the results before you view it?

Good catch... I went back and bolded that part.

Pepperdine also has a pretty good video stream on their web site; I hope that will still be active even though the game is televised. I will post a link closer to game time.
_________________
Run 'Em Aground Pilots!

Again, as a service to our readers, here are the prognostications from Ken Pomeroy/ Basketball State. (Notably, College State picks the Pilots to WIN!)

The Sports Network gives the edge to the Pilots if………………….

A couple of West Coast Conference teams that have seen better days hit the floor at Firestone Fieldhouse in Malibu tonight, as the Pepperdine Waves host the Pilots from the University of Portland.

The Waves, second-to-last in the WCC with just two wins in 14 tries, have won just a single game since the start of the new calendar year, a 74-62 triumph versus Santa Clara. More recently, the team played two nights ago and was handed an 81-70 loss by Seattle University on the road. The defeat was the fifth straight and the 13th in the last 14 games overall for the program.

As for the Pilots, they too have been in crisis mode for the last five weeks or so, losing all but one of the last 10 contests. On Thursday night, the squad was taken out by San Diego in overtime, 78-75, at Jenny Craig Pavilion, which means Portland is now only 3-10 in league play and just one step above the Waves in the standings heading into the weekend.
With respect to the all-time series between these two schools on the hardwood, Pepperdine leads 53-32, although it was Portland that won the meeting earlier this season at home, 53-43.

Portland trailed by as many as 17 points in the second half against San Diego two nights ago, but Kevin Bailey got the visitors into overtime thanks to a buzzer-beating three-pointer. Bailey finished with 18 points overall, but the team failed to pick up the win in the end. Tim Douglas accounted for 11 points and Ryan Nicholas another 10 to go along with seven rebounds, while Dorian Cason responded with nine points and nine boards. Portland hurt itself with just 61.9 percent accuracy at the free-throw line and 16 turnovers. Over the course of 13 conference games, Bailey leads the Pilots with his 11.5 ppg, while Nicholas checks in with 11.2 ppg and is also tops on the list with 7.8 rpg. Both players have had their issues with foul trouble and because of that have had to take a seat on the bench from time to time which explains why this group is being outscored by WCC opponents by a margin of almost 10 ppg.

Less than a minute into the meeting with Seattle, Pepperdine was up by seven points, yet somehow that advantage disappeared and was replaced with an eight- point deficit at the break and an 11-point loss in the end. Taylor Darby and Corbin Moore were both responsible for 20 points, the former grabbing nine rebounds and the latter hitting on 4-of-5 shots behind the three-point line. Jordan Baker tacked on 11 points, five boards and five assists but the group simply could not overcome 16 miscues. This entire season has seen the Waves struggle to produce on offense and now they are averaging just 58.9 ppg which is one of the lowest marks in all of college basketball. Darby (11.8 ppg) and Moore (10.3 ppg) have tried to give them a fighting chance, but there are simply too many factors working against Pepperdine.

Both of these teams are desperate to show some signs of life with the regular season drawing to an end in short order. As long as Bailey and Nicholas can spend quality time on the floor and not have to worry about foul trouble, the Pilots should be in decent shape tonight.

I also got my 1st technical (at San Diego) in 2 seasons. Didn't swear and was not disrespectful. Just complained too much. Both complaints and tech valid.

Coach Sobotka did a fantastic job with the (Pepperdine) scouting report presentation to the team. Guys seemed focused and appreciate importance of game.

Losing can be disorienting (or is that discombobulating?) for players and coaches alike. Need to stay focused on fundamentals and your role 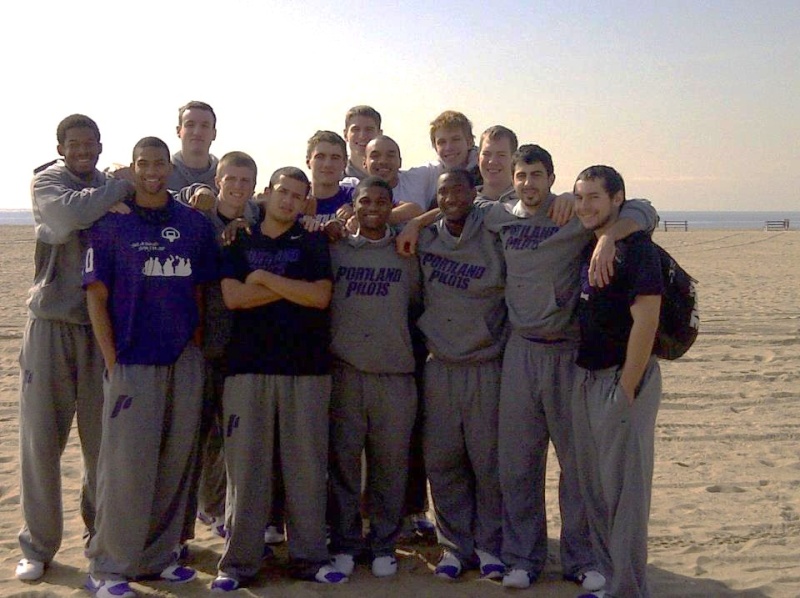 (This was taken in Santa Monica before our game at UCSB, but I thought it was appropriate for our game tonight in Malibu)

Fpt is terrible. Sound is about 3 seconds behind the video.

I dont understand why Nicholas and Van der Mars sat so long in the second half? John Bailey is improving, but the time with him in cost us dearly.

Their bigs were killing us on the boards... attrocious.

Interesting timing tonight to have Carr start playing the point...

We dont foul until 30 seconds to go?! We let Pepp run way too much time off... I dont understand.

PilotNut wrote:I dont understand why Nicholas and Van der Mars sat so long in the second half? John Bailey is improving, but the time with him in cost us dearly.

When Ryan sat in the second half is when Pepp opened up the game and never looked back. We need Ryno on the floor.

He played PG on Thursday too. I like it when he's running the point with Tanner/Nem/Kevin on the wing.

I agree that Carr played pretty well tonight, even though we stalled down the stretch.