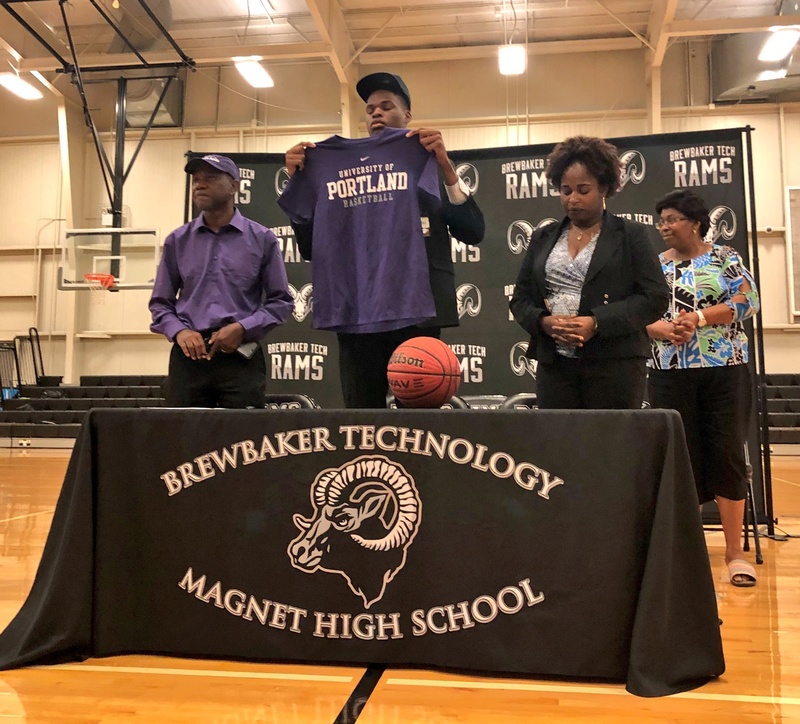 Maria Martin WSFA 12 News wrote:Brew Tech 6’10 C Theo Akwuba has talked to schools all over the country. Today he signed a D1  scholarship to play at the University of Portland. He will major in Software Engineering. Dude has a tremendous upside. Hear from him at 6 on @wsfa12news

The kid is gonna need a little longer shirt...

Great get for the Pilots.

Note his father is decked out in purple.

Someone impressed the whole family. 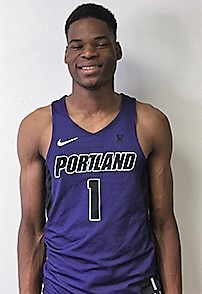 Welcome, Theo! I am certain that both the Basketball Program and the Engineering School are glad to have you on board.

Congratulations to the coaching staff on finding him and getting the NLI signed.

So we have Diabate, Hogland, Phillips, Jacob Tryon and Theo Akwuba on the front line. The most athletic and tallest front line I recall. Are we entering an era where low post scoring will occur with some frequency, soon to be a realistic threat?

It is not clear how minutes will be allocated or which of the freshmen recruits, if any, is likely to redshirt. Assume Tryon will not redshirt given that he already has one year of eligibility used, but maybe.

For that matter I am not sure how minutes will be allocated among the wings and the backcourt. Are Clark and Fahrensohn going to demand time with their play?

I assume Shaver will suffer no loss in minutes, perhaps not McSwiggan either, Malcolm and Walker will continue to compete, but Shaver may be sliding to the point more frequently this year, or Clark may play the point some too. Where does Franklin fit in?

Good problems to have for the staff.

Great Signing, similar to Diabate and Shaver in Talent level....If he develops his game similar to them the future looks bright...

I'm looking forward to seeing what Hugh does this year after his R/S year.

Now let's hope Clark is as good as DD says he is and stays healthy the  whole season. The Pilots will have several offensive options, instead of
basically just Shaver when they needed a crucial bucket.

The Portland Pilots’ second season of building the program to get to the top of the WCC took an interesting turn on Monday when 6’10” Theo Akwuba of the Brewbaker Technical Magnet School in Montgomery, Alabama, became the latest Pilot to set sail in coach Terry Porter’s program.

Akwuba is an interesting young man, indeed, as he averaged a triple double this season with 11.7 points, 14.1 rebounds…and…10.4 blocks per game.

“He only fouled out of two games,” said Portland assistant coach Bob Cantu, “He has excellent timing and body control.”

His 7-foot, 4-inch wing span was a novelty to anyone who patrolled the lane on him this season. In fact, he had 22 blocks in one game and 18 in another. He has a stretch of eight games this past season where he blocked 118 combined shots or 14.8 blocks per game and led the state of Alabama in blocked shots in both his junior and senior years.

Akwuba was relatively under the radar until this season as he has only played two years of varsity basketball and only a few AAU competitions.

He became a phenom who took off at Brewbaker as he was all-state in Alabama at the 5-A level and, according to maxpreps.com, was No. 2 in the nation in blocked shots behind George Conditt of Corliss High School in Chicago, who averaged 13 per game.

“He just turned 18 years old and doesn’t even shave,” mused Cantu, “When we found out about him, we moved quickly.”

He will figure immediately in the Pilots plans in the paint with 6-9 Tahirou Diabate, who averaged 6.4 points and 4.2 rebounds this past season as a freshman. Jacob Tryon, a 7-0 center from East Los Angeles Community College, is also an immediate option inside.

As the latest addition to the Portland roster, Akwuba will also be a prime component of the Pilots’ program off the court as well as as he had a 3.7 GPA at Brewbaker and also posted a 26 on his ACT. The newest Pilot plans to major in Computer Science Engineering.

“We offer Computer Science Engineering and we have playing time available,” explained Cantu, “He had an amazing visit and the timing was perfect to make him a Pilot. I couldn’t be happier.”

Akwuba, who is a native of Nigeria, moved to Montgomery, Alabama when he was eight years old. He is the third member of the Pilots’ 2018 class so far as he joins Tryon and 6-8 power forward Josh Phillips of Edison High School in Los Angeles.

Akwuba chose the Pilots over Western Kentucky, Texas A&M, Troy, and St. Bonaventure among others.

The smartest Pilots always seem to be the biggest ones... Joseph Smoyer, Thomas van der Mars, Ryan Nicholas, Kramer Knutson, Andreas Gahlmann... I'm sure there are lots more, but Theo fits into a fine tradition of big guy scholars!

Three HS senior big guys signed in this one class. Kudos to the coaching staff!

Last year's recruiting class was "top 10" according to Hoop Scoop. Does anyone have a subscription there to tell us where this class ranks?

Of the three big guys, Akwuba and Phillips are both touted primarily as shot blockers, whose offensive games are still in need of growth. In general, I'm not convinced that shot blocking is the most important skill to have on a team. (Did Hartwich's one-dimensional shot blocking ability help us win many games?) Let's hope that these two incoming guys can actually score baskets at the DI level and shoot free throws, too.

Tryon looks like a more established offensive threat, but not necessarily a low-post scorer. We'll certainly have an intriguing mix of young post players this coming season.

NoPoNeighbor wrote:Three HS senior big guys signed in this one class. Kudos to the coaching staff!

Actually two HS seniors and a JUCO freshman who also had a year of prep school after graduating from high school, but still, Kudos to the staff.

It's certainly true that Jacob is the offensive pick-and-pop threat who can create lanes to the basket for guys like Josh M. Those lanes just weren't there last season when the defenders didn't need to follow Phil away from the basket, which forced Josh and others to shoot from the outside.

It's also true that Josh P. and Theo have no real history of being offensive threats, but it's also difficult to know what their roles were with their high school teams. One of the reasons both were recruited was for their shot blocking, and in fact, Theo was unknown to the staff until they saw the national shot-blocking stats.  Seeing Theo was number two in the nation (the number one shot blocker signed with Iowa State), they enquired about him, visited him, and signed him.

It's difficult to say who will get the bulk of the playing time now that there are real options with Hogland, Diabate, Phillips, Tryon, and Akwuba all vying for playing time, but...

wrv wrote:Good problems to have for the staff.

And the problem will only get better/worse if the Pilots use the last remaining scholarship to sign a grad transfer post player.

DD wrote:And the problem will only get better/worse if the Pilots use the last remaining scholarship to sign a grad transfer post player.

An inventory might be in order. We have 3 post players. Do we need more at other spots?

One thing that is cool is that Diabate isn’t pegged into that category out of necessity.

I'm an optimist.  I thought we had a great recruiting class last year.  We proved we could keep up with most teams in this conference  - we just couldn't win.  Next year we'll start winning many of those games.   We'll have the same defensive capacity Phil gave us, but also  a very very good chance they'll be some offense to go with it.

OK... updated chart, now with Akwuba! Let me know if I need to fix anything. 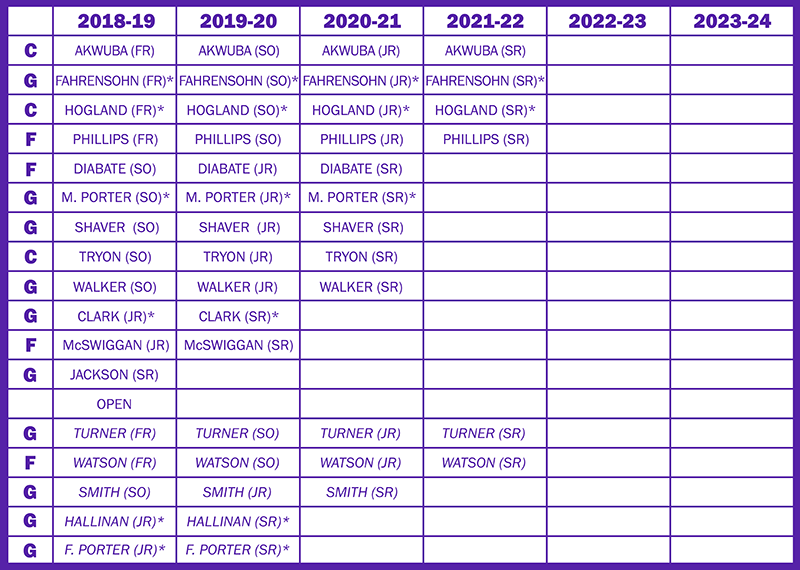 Coach Cantu talks about the recruiting of Theo: http://collegehoopswatch.com/2018/05/02/marching-to-madness-episode-257-bob-cantu-portland/

Geezaldinho wrote:An inventory might be in order. We have 3 post players. Do we need more at other spots?

I don't think the Pilots need another post....IMO the team is already better off than last season, but what is needed is a versatile leader.

The team needs a mature, athletic, steadying guy who can play more than one position (2,3,4 perhaps), and can unselfishly help the team develop and mature while sharing minutes with his young teammates.

That's a lot to ask, so I don't see my ideal grad-transfer coming from a Power 6 school, or even a strong mid-major, but instead from a school that played strong fundamental basketball and turned-out a student-athlete-leader who can matriculate in one of UP's graduate programs.

IMHO this year  I would like to see   Clark , Porter, and McSwiggin all provide the team leadership after years of playing college basketball ....

DD your right though

, this team always could use more veteran leadership from a grad transfer....it just would be nice to see those three
players step up in the leadership dept. like Phil and Tyson did last year.

MesaPilot1 wrote:IMHO this year  I would like to see   Clark , Porter, and McSwiggin all provide the team leadership after years of playing college basketball ....

That would be nice, and I think all three have the ability to provide that leadership...and if they do step up, it would free-up a grad-transfer to just play and lead by example.

As I mentioned in my earlier post, a versatile 2,3,4 would be ideal, but the emphasis should be on the 3/4.  Diabate and Tryon should be interchangeable at the 4/5 while giving Hogland and Akwuba opportunities there (I think Phillips will redshirt).  McSwiggan should be much more effective at the 3 with either starter in the lineup, but a skilled grad transfer in the mix should give TP a lot more options and bring some scoring to the inside game while opening up the outside game.

The grad transfer market is steadily drying up, as it does every year at this time. Any leads on actual names of a 2/3/4 (emphasis on the 3/4)?

When DD initially hints at a "grad transfer post player" but then pivots to a "2,3,4 perhaps," I've gotta think there's some real intel behind the change-of-heart

We have seven scholarship guards who are not eligible to redshirt (F. Porter included). We don't need a 2.