OK, I admit it, I've become a Lightning fan!

Those third periods, especially once a team pulls its goaltender, are as exciting as anything else I can think of in team sport.

Oh, just because I prefer the Lightning over the Blackhawks doesn't mean I'm not still a fan of the Blackhawk Ice Crew... 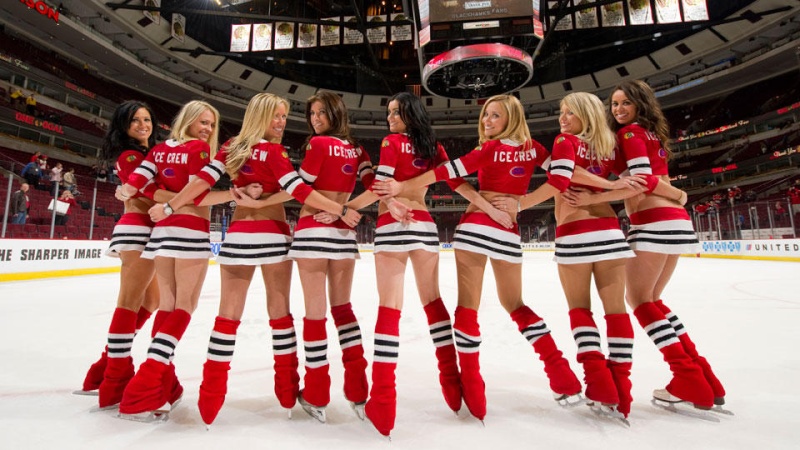 The Blackhawks missed two shots at wide open nets, and gave up a goal with 3 minutes to go.  That home loss has to sting.

Some of the passing this series has been fantastic.

Another great game tonight, Chicago winning 2 - 1 to tie the series at 2-all.  The last 2 minutes were insane.

They absolutely were.....and Crawford (the Blackhawks' goalie) was unconscious....um, not literally, but he was also saved a couple of times by the post and cross bar as the Lightning poured it on with their goalie, 20 year-old Andrei Vasilevskiy, pulled for added offense.

The Blackhawks were pretty dominant in winning their 3rd Stanley Cup in 6 years.  You had to like Tampa Bay's efforts, especially in the first four games, but the 'Hawks are just so deep they were able to wear down the younger Lightning team.

Being a UP fan, I was rooting for the underdog Lightning......but as we are used to saying, "Maybe next year."

There were some very questionable goalie decisions in game 5.  But I love the skill players on the Lightning.

The playoff for The Cup is underway again, so it's time to start watching ice hockey.  One note of interest is that there are no Canadian based teams in the playoffs.  Perhaps Dean can tell us if anyone north of the 49th Parallel has noticed this.

I've watched parts of a couple games so far, mostly the Kings/Sharks series.  But tonight's game between the Blues and the Blackhawks was great.  On the brink of elimination, the Blackhawks forged a 3-1 lead going into the 3rd period.  but the Blues tied it, and the game went into overtime.  No goals in the first overtime, then 3 minutes into the 2nd OT Patrick Kane took a shot, raced behind the goal and stuffed the rebound on the other side for the winner (goal and an assist?).   Blues still lead 3 games to 2, but the next game is in Chicago Saturday night on NBC.  Should be good.

Tampa Bay Lightning are the first team to win their first round series, sweeping the Red Wings.  Kings have to win Friday to stay alive, and do the Flyers vs. the Capitals and the MN Wild vs. the Dallas Stars.

The Blues won their game 7 against the Blackhawks, eliminating the defending champs 3-2. The final period was great as Chicago desperately tried to even the score. They had a chance, but the puck bounced of both goal posts and stayed out.

up7587 wrote:The Blues won their game 7 against the Blackhawks, eliminating the defending champs 3-2.  The final period was great as Chicago desperately tried to even the score.  They had a chance, but the puck bounced of both goal posts and stayed out.

up7587 wrote:The Blues won their game 7 against the Blackhawks, eliminating the defending champs 3-2.  The final period was great as Chicago desperately tried to even the score.  They had a chance, but the puck bounced of both goal posts and stayed out.

That's what I thought, too.

More good stuff. DD's team from last season, the Lightning, played the Islanders tonight. They gave up a 3rd period goal on a turnover and trailed 4-3. But they pulled their goalie and scored with about 30 seconds to go to tie, and then won in the OT.

Great game tonight. Tampa was leading 4-0 after 2 periods, time to switch to the Mariners, right. Pittsburgh scored 3 goals, the last with over 6 minutes left to go. The final minutes were wild as they pushed to tie, and Tampa fought to hold them off. Tampa succeeded, and evened the series at 2-2.

The Cup championship started tonight, between the San Jose Sharks and the Pittsburgh Penguins. Penguins are at home. Currently 2-all after two periods. Penguins scored twice in the first period; Sharks came back with two in the second.

Interesting (to me, a least), that this game is on NBC. Meanwhile, the NBA game 7 between the Thunder and the Warriors is on TNT.

Excellent game from a fan standpoint. I was of course rooting for the Sharks, but a defenseman's dropped stick created the opening for the Penguins winning goal.

Sure hope others here got to watch tonight's game eventually won by the Sharks 4-2 forcing a game 6 on Sunday in San Jose.  The Penguins lead the series 3-2.

San Jose is the bigger, more physical team, and that really showed tonight even though Pittsburgh is the better overall team, but with 3 goals in the first period, it was also obvious San Jose had the better goal tender on the night.....Jones ended up with 44 saves, one of which was definitely the game changer.

Pittsburgh still leads 3-2 in the series. But they were denied(for now) the opportunity to in the Cup in their home ice, something that franchise has never done.

Game 6 is in San Jose on Sunday.

And it is over. Pittsburgh Penguins win the cup with a 3-1 win tonight over the San Jose Sharks. Another exciting game. Pens took a 1st quarter lead. Sharks tied it in the 2nd, but then Pittsburgh did some excellent work and quickly took another lead. An empty net goal in the closing minute closed out the game. Pittsburgh won the series 4-2. Sidney Crosby won the MVP award.

up7587 wrote:One note of interest is that there are no Canadian based teams in the playoffs.  Perhaps Dean can tell us if anyone north of the 49th Parallel has noticed this.

Oh you can bet it was noticed.

I was perfectly fine with it. Canucks were garbage all year as was expected, and if they're not going to be any good then I don't want all the Calgary/Edmonton/Toronto/Winnipeg fans around here to be happy either. Crabs in a bucket, baby!

Hey, Dean. What's going on this year? I see that Calgary, Montreal and Toronto all made the playoffs. And Vancouver was last in their division. Ouch. Who should we be watching when the games start on Wednesday?

Opening night, saw bits and pieces of games. 5 games played, and the road team won 4 of them.

Some good hockey the last two months. It culminated today with the Pittsburgh Penguins winning the 6th game for the first road win on the Final, closing out Nashville 4 - 2.  Penguins are the first back-to-back champs since the Redwings a couple decades ago.  Sid Crosby was the Final MVP back-to-back as well.

The Predators caught a tough break.  They punched in a goal in the 2nd period, but it was disallowed because the ref blew an early whistle when he lost sight of the puck.  The Penguins got a goal with a couple minutes to go on a ricochet of the goalkeeper's elbow from behind the net.  That was the winner.

It's been a way more interesting Stanley Cup than it has been NBA Finals. I couldn't help but cheer for Nashville to win their first, but alas... That being said, I was cheering for Ottawa all though the playoffs before that.

SouthCarolinaPilot wrote: I couldn't help but cheer for Nashville to win their first, but alas...

Yeah, I too was rooting for Nashville, but it appeared from the outset that the Penguins were the better team.

Okay, someone please explain to me the Predator fan's proclivity for throwing (often live) catfish on the ice.  I guess it is some sort of tradition, but it must have an origin.

Pittsburgh fish markets and the Penguins staff made quite a deal out of keeping the fish off the ice during the games in Pittsburgh, but some fans were still able to sneak the fish in and throw them on the ice.

I'd read one Predator fan who threw a fish on the ice in Pittsburgh during game one faces "disorderly conduct, disrupting a meeting and possessing instruments of a crime" chargers that can carry a six year prison term. 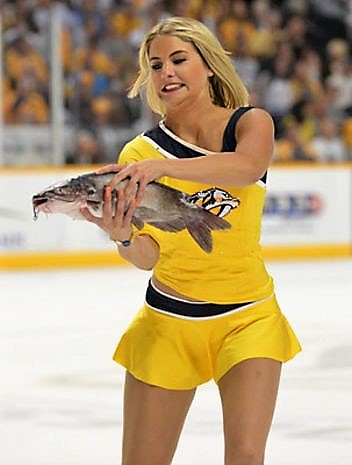 2) Let me speculate wildly... I have to wonder if it is meant to be a "Southern take" on the octopus throwing tradition of the Detroit Red Wings (who missed their first playoffs in like 25 years this season!).

2018 NHL playoffs kicking off.  Canadian teams in this year are: Toronto and Winnipeg.  Red Wings, Rangers, Islanders and Blackhawks are all out. All the California teams are in, along with Las Vegas, the Pacific champs. Favorites look to be Nashville and Tampa Bay, based on season records.

After more research (i.e. google), Nashville is indeed the favorite. It was fun last year to see all the Nashville music stars singing the anthem before their games. Boston and Tampa Bay are second favorites. Las Vegas is 4th.
http://www.vegasinsider.com/nhl/odds/futures/