Is anyone else watching the finals? The Blackhawks and Bruins have played two games. both overtime thrillers. The Blackhawks won game 1 in three overtimes. The Bruins came back to win game two in the first overtime. The action has been great. Check it out.

You are kidding, right?

Today was the first day of the confederations cup. To even Pele's surprise, Neimar scored early  and Brasil beat Japan in the opener.  The Timbers beat league leading Dallas. The USA women beat Korea and now Wambach is one short of the all time soccer scoring record in the history of the World, about 60 more than Pele's mark. Chile and Bolivia are playing a thriller. It's the second to last week of the Argentine league and Independiente is about to be relegated for the first time in their history due to San  Juan fighting a miraculous comeback to stay in the first division. Boca might end up at the very bottom of the table, though they won't be relegated, and Leo Messi, injured though he is, scored a fantastic golaso last night for his 36th to lead Argentina and pass Maradona's all time scoring records for club and country and putting him tied for second with Crespo. He still needs to score 20 to pass Batistuta, which he just might do before the next World Cup is done, the way he is scoring now.

We are six days from the summer solstice and the longest day of the year, and you want to know if I am following Ice Hockey?

Are you crazy?  I mean,  isn't the sport in the WINTER Olympics? When I walked the neighbor's dog today I had to make sure she stayed hydrated.

What? Are you kidding me? Of course I watched the hockey this evening....and will watch every game of the Stanley Cup Finals.

Rushed home from the Timbers game today in time to switch on the DVR to watch hockey and US Open golf.

The biggest problem with the TV coverage of hockey is there is too much emphasis on the announcers during the breaks and NOT near enough views of the Blackhawks Ice Crew whose sole purpose is to keep the ice clean..... (the Bruins have Ice Girls too). 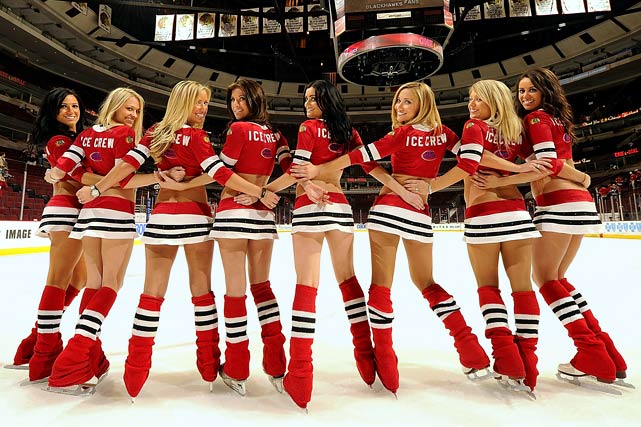 Oh, and I watched much of the Beavers loss to Miss. St in the College World Series earlier today too.  Couldn’t help but think the NCAA Compliance folks aren’t paying much attention to spelling this year if the home team dugout is any indication. 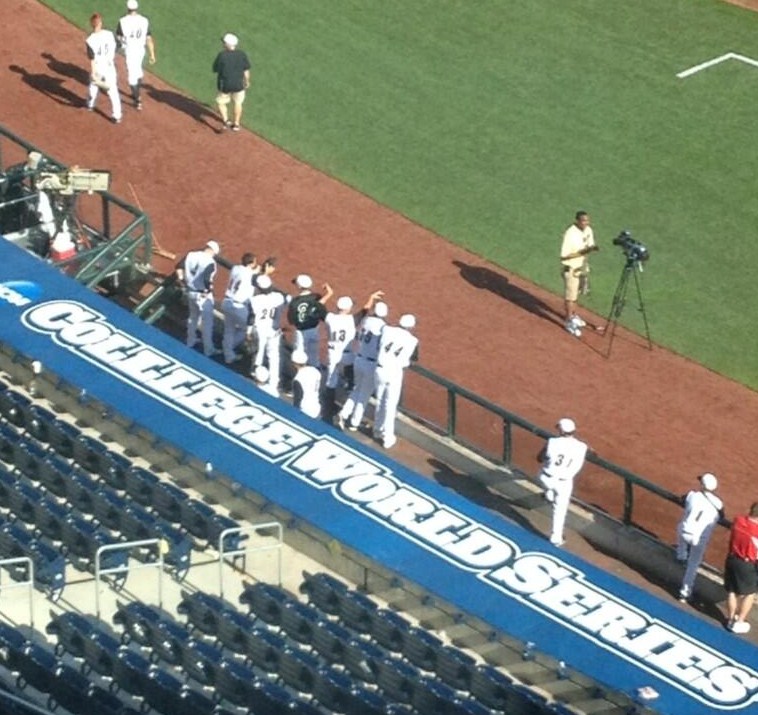 Haha.  Maybe they play for the culinary institute of America. I'm not sure I'm going to be able to watch another game of the CWS without snickering.

Kinda reminds me of the first time the newly re-sodded Merlo pitch was lined. The line for the top of the 18 yard box was painted all the way across the field at the parking lot end. I passed a little hint to the fellow doing the work before he did the other end.

Very few folks noticed the green paint until the grass grew out.

I did see the Timbers; good game. I was concerned they let too many chances get away. Fortunately not.

Next Blackhawks - Bruins game is Monday evening. It is true that the finals won't be over before the first day of summer.

The funniest part about having the Stanley Cup stretch into Mid June is you get to watch fans walk around all day in black thick polyester long sleeved replica jerseys when its in the 80s today with humidity in the 50-80% range....

No overtime tonight....the Bruins looked pretty dominant in their 2-0 win, and the Bruins Ice Girls did a terrific job keeping the ice clear as best they could with the warm conditions and rough ice. 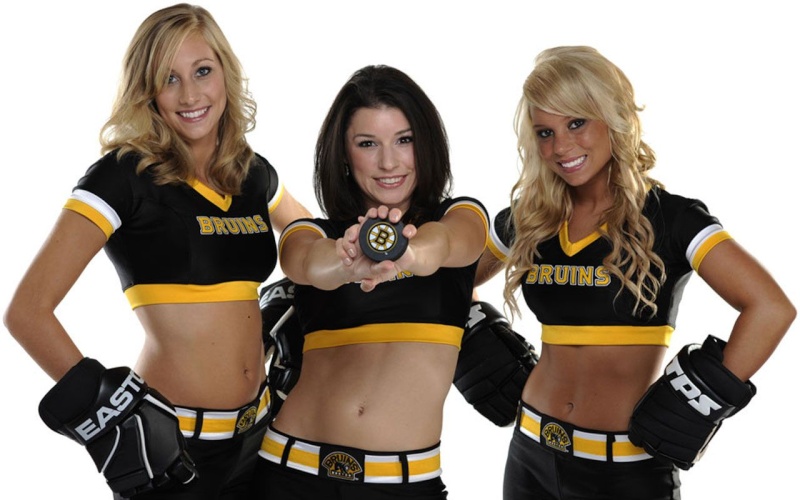 I've got to quit fast forwarding my DVR through the breaks.

While watching last night's game, Mrs. DD and I were discussing women's ice hockey and how much we enjoyed watching it during the Olympic Games....recalling how Canada won the gold in Salt Lake City, Torino, and Vancouver.

The discussion reminded me of a picture we really enjoyed....but one the IOC did not approve of: 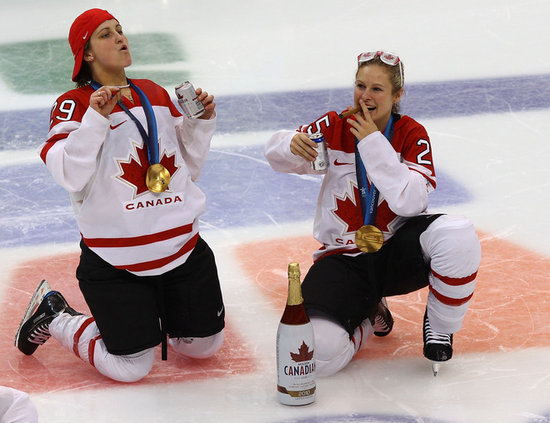 Knowing the IOC I'm sure they weren't upset with the drinking beer and smoking cigars on the ice. The problem must have been that Molson wasn't an Olympic sponsor.

Off the glass, off the top of the net, and knocked in on a bounce. Crazy goal!

Lots of scoring tonight. 4-3 Chicago after two. The third period should be fun.

5 - 5 at the end of regulation time. Another overtime game! Sudden death intensity!

A little late with this, but it was another terrific game Wednesday night with the Blackhawks pulling out a 6-5 decision in OT.

It turns out I'm a Blackhawks fan....didn't know that until watch the Stanley Cup Finals.

You don't see flopping in ice hockey because they are so bad at it.

Willie Loehman would be proud of this sales job

Man, the way the Blackhawks came back reminded me of game 6 of the NBA Championship....except San Antonio didn't pull their goalie, and for Boston, tomorrow is now next year.

Great hockey.....NBA, NHL, & MLB seasons are way too long, but it's great to see the postseason games/matches come alive with enthusiasm and intensity.

It's just a shot away:

Missing in the montage was the great work done by the Blackhawks Ice Crew between periods....

However, I'm told the team may furlough the Ice Crew and buy back the Zamboni because too few hockey fans were leaving their seats and going to the concession stands during the intermissions... 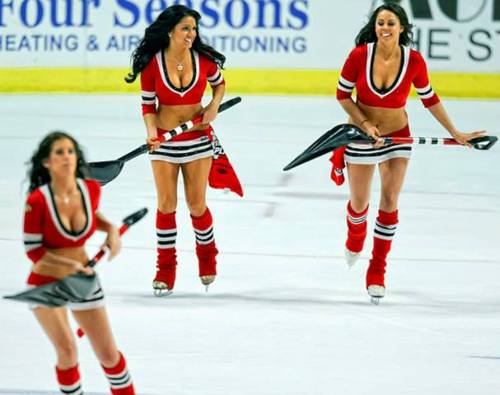 In the 2014 version of the Cup, the L.A. Kings beat the Rangers in 5 games. Tonight's final was a 2OT thriller. Great goaltending the whole series.

OK, time for the 2015 edition of this thread. Game 1 was played Wednesday evening between the Chicago Blackhawks (again!) and the Tampa Bay Lightening.  Two traditional hockey towns with strong followings.

Actually, I heard it might be cheaper for a Chicago fan to fly to Tampa and buy a ticket than get a ticket in Chicago.  And the Tampa management is banning Blackhawks apparel on fans at the games, at least in some areas of the arena.


Anyway, the Lightening got off to a dominating start of game 1, with a great 1st period goal - no-look, mid-air, back-handed.

The score was still 1 - 0 into the 3rd period, with Tampa trying to hold the lead focusing on defense, until with 6-1/2 minutes ot go Chicago tied the game. Then 2 minutes later they went ahead, and that was the final: Chi 2 - 1 Tampa.

I watched the game, and it was good, but with two teams in the final that I know very little about (ice hockey in Tampa?), it is somewhat lacking in excitement.   Even the Tampa crowd seemed subdued compared to what I've seen live in Chicago or Boston or Montreal or Vancouver.

I gotta say, the frenzied activity and excitement of the 3rd period of the game Saturday night was about as good as it gets.

I'm really starting to like this young Lightning team....now the teams go to Chicago all tied up at 1 game apiece.

Hockey isn't limited to the traditional locations like uh, Phoenix.