Any speculation about this tweet from Rev this morning?

"....very exciting." Hmm, well as early NLI Day for the class of 2014 is still 11 months away, and the "prospect" on the other end of the phone is no more than 15 or 16 years-old, I would have to temper the excitement with the knowledge that ANYTHING can happen between now and next November...just saying.

Maybe it's the center that up7587 was looking for. Who knows?

Ugh, I wish coaches could reveal names of recruits, but only in riddle form....

(Related note, I may have taken too much cold medicine and/or want to go see The Hobbit again)

DaTruRochin wrote:Ugh, I wish coaches could reveal names of recruits, but only in riddle form....

Ha ha, even if they could you know they woudn't......it may not be secret from other coaches, but don't make it easy for them either!

You can see why the staff likes this Jadon Cohee fella. And his Walnut Grove team did indeed win that provincial championship this year...

DeanMurdoch wrote:You can see why the staff likes this Jadon Cohee fella. And his Walnut Grove team did indeed win that provincial championship this year...

I actually had a chance to see this kid last summer, and what impressed me besides his size for a PG, 6-4/180, was his leadership and poise.

I understand UP made him an offer....and he'd be the only true PG in addition to Alec on the roster.  (Bobby and Xubi are combo guards, so can play the 1, but Jadon would do much better, IMO).

[PLEASE DISREGARD THIS POST. I failed to observe that this discussion was from December 2012.]

DoubleDipper wrote:"....very exciting." Hmm, well as early NLI Day for the class of 2014 is still 11 months away, and the "prospect" on the other end of the phone is no more than 15 or 16 years-old, I would have to temper the excitement with the knowledge that ANYTHING can happen between now and next November...just saying.

DoubleDipper wrote:"....very exciting." Hmm, well as early NLI Day for the class of 2014 is still 11 months away, and the "prospect" on the other end of the phone is no more than 15 or 16 years-old, I would have to temper the excitement with the knowledge that ANYTHING can happen between now and next November...just saying.

I wrote that last DECEMBER!! ....so I think the 11 months to next November and the early NLI period was accurate at the time..... As far as age goes....who knows? I just recall I was five months into my freshman year at UP before turning 18 years-old.

.......regardless, I'd much rather talk about potential recruits than discuss math....

Oh man, DD I'm sorry! I completely neglected to look at the DATE of the posts on this thread. I saw a new topic at the top of the list and assumed that this entire discussion had been posted yesterday. Yikes. Apologies. I retract everything I said in my previous post.

NoPoNeighbor wrote:Oh man, DD I'm sorry! I completely neglected to look at the DATE of the posts on this thread. I saw a new topic at the top of the list and assumed that this entire discussion had been posted yesterday. Yikes. Apologies. I retract everything I said in my previous post.

Sometimes these PN posts can be so confusing......

If I apologized for every questionable post I've made, I'd have caught up with the Geezer by now.

I hear Santa Clara is pretty interested in Cohee as well, but not sure if there's been an offer from the Broncos.

Any way we could merge the "never too early" thread into this one? There was some good info in there.

Another name - 6'7" SF/PF Mark Champion from Georgia. Formerly a Class of 2013 but I believe is reclassifying to 2014 and doing a prep year at Hargrave Academy.

Pilots, SE Missouri State both after this kid.

Hmm, Champion really is below everyone's radar at the moment it would seem, but I've heard that Champion is definitely heading to Hargrave to increase his game and visability......and MAY take an official visit to UP toward the end of June.

I saw this pretty impressive lefty shooting guard last summer when he was playing for the Emerald City Pioneers……now he’s beginning to get some serious attention from UP, I’m told. 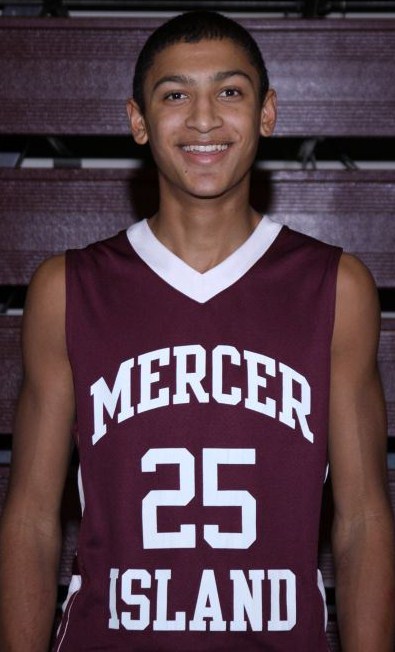 Really, UP can never have enough shooting guards….by the time a class of 2014 grad reaches UP, David, Bryce, and Aitor are the only SG’s on the roster.

With only KB at the wing next year, it’s probably good the Pilots are looking long and hard at Spencer Mathis, a 6-7/180 small forward from Las Vegas.

I bet we see him at the South Point Holiday Hoops Classic in December.… 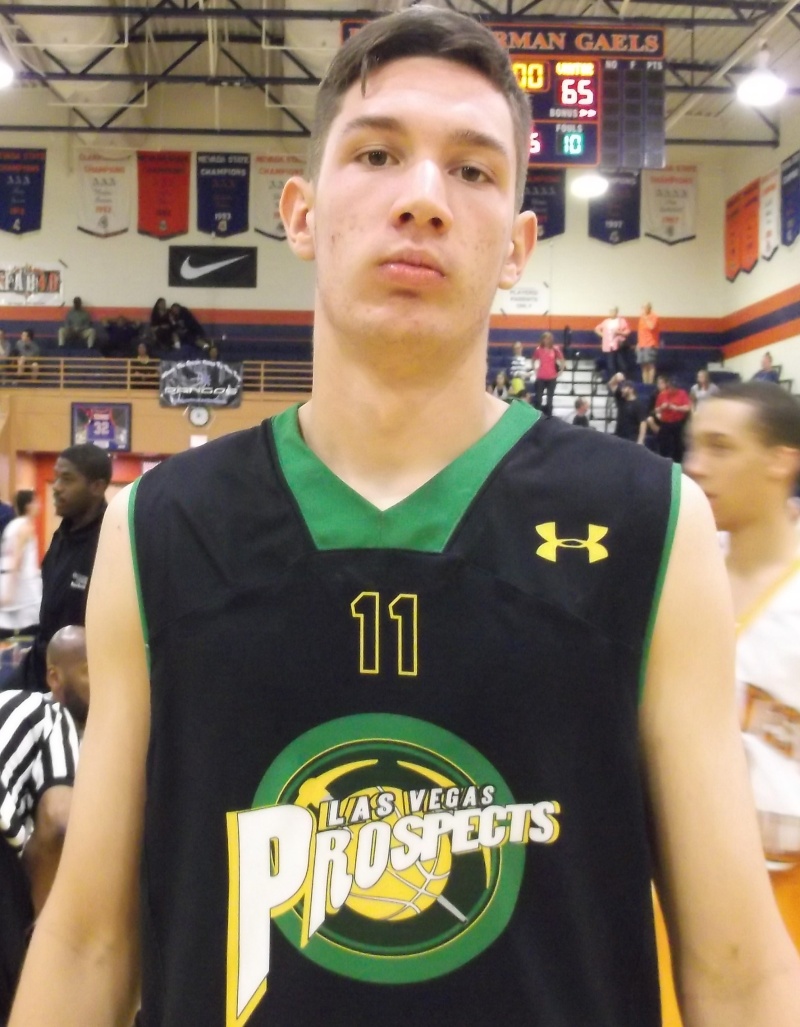 Yeah, I was going to say something about him. If you haven't yet you should check out this article on him

At this time, Mathis is developing his school list as a number of colleges are following his progression. Santa Clara, Cal State Fullerton, So. Utah and Portland have extended offers to the talented wing already. Colorado State, No. Arizona, Rice, UC-Riverside, Idaho State, UNLV, No. Colorado and Utah have also shown significant interest in Mathis with the last two going as far as to imply they have offers waiting in the wings so to speak.

While Mathis has seen some campuses during tournaments he has traveled to playing with the Las Vegas Prospects, the nationally recognized grassroots program he competes with, he has otherwise not taken any visits yet. However, the skilled guard/forward plans to get a feel for campuses and such when he attends a few camps coming up at Santa Clara, Portland and Utah and then perhaps some officials during his senior year. Mathis does have a few set issues he is contemplating while considering his school options currently...

The great Andrew (one-and-done) Wiggins decided on KU instead of UP this year, but that shouldn't deter the Pilots from going after another Canadian, Tristan Etienne for 2014.

Tristan, from Abbotsford, is pretty mobile playing PF for his club, but at 6-9/190 he's going to have to get some muscle in the next year to play D-1 at that position.

Apparently WSU, UW, PSU, Seattle U, and Utah are showing interest too. 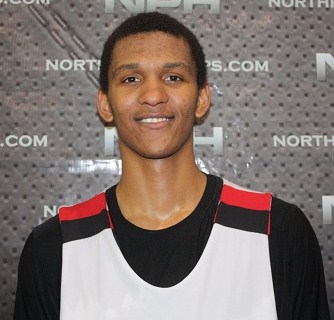 Another PF that was in town a couple of weeks ago, and is already getting closer to the size he'll need for D-1 ball, is Jacob Lampkin.

At 6-8/210, the O'Dea of Seattle PF has garnered a lot of interest from some fine schools including Dartmouth, American, Stanford, Santa Clara, Pacific, and WSU.

Although by the looks of his shirt, he may prefer California weather over the NW. 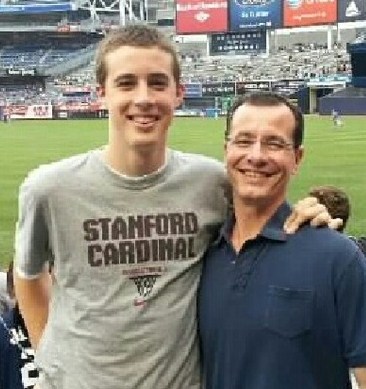 Let's step back and think about what the needs are for the 2-3 remaining 2014 scholarships.

We've now got a commitment from one 2014 PF, Gabe Taylor.

A couple of thoughts on priorities for the 2 or 3 remaining spots:

With Thieleke's graduation, we'll be short on athleticism - aside from K. Bailey, who will be a senior. I'd like to see us go after an athletic wing who can play lock-down D, and hopefully be a more consistent offensive threat than Thieleke.

We should also look to bring in another legitimate center. All three of our big men will be seniors in 2014-15, and it would be nice to avoid the situation we had a couple of years ago, in which we had to rely upon VDM to be the starter as a freshman. (I recognize that Barker's injury contributed to that.) It would be nice to have a freshman center on the roster to play behind VDM and Barker, or even redshirt, during their senior year.

Though we'll have Wintering and Zubi as sophomores in 2014-15, it would be smart to get another guard in that freshman class, too.

All this is to say that we probably don't want to use up another 2014 scholarship on a 2nd PF. But it seems we've got offers out to a number of PFs at the moment.

In terms of Needs We need to go Big. If we have 2 or 3 scholarships we will still need depth at the 4 and 5 spot. The truth is we have so many juniors this year that after next season we will be needing depth in 2015 class. It should be interesting what happens

In terms of Taylor, looks like he's a little bit of a stretch 4, Knowing Rev he may want a traditional 4 as well (Lampkin maybe)

Let's assume there's four open schollies this year. One's taken by Taylor, obviously. A good fit for the second scholarship would be an eventual successor for Kevin Bailey (someone along the lines of Spencer Mathis, I suppose). Ideally, I think the third scholarship would go to a HS C - but if there's no fit there, you could very easily make an argument for another PG.

And the fourth scholarship? I don't think there's any reason to use it right away. It won't be required of any of the 2014 players to have to make an immediate impact given the current roster makeup, so why not leave a spot open in case a transfer - ESPECIALLY if it's a big - comes calling? Even if the transfer would have to sit out 2014-15, he becomes eligible in 2015-16 when he'd be badly needed.

Also don't forget about the slight, let me say it again, slight chance of an Oskars Reinfelds return

2014 needs another two guard. Bobby and David are about it and neither have been tested at this position. I read that Bobby is heralded as a fine outside shooter but we only saw David at PG until his injury. Speaking of PG, if Alec is the starter does David back him up when he returns? If so that makes the 2 spot even thinner.

I dont know if we need another center in 2014 as there will be three already. Yes I am including Volvo as a post.

Obviously another 4 will be needed but it looks like DD has tagged a couple either comitted or perhaps with some interest.

What I am sure of is that I am glad not to be the coach responsible for making this jigsaw puzzle all fit. I have a headache just getting through this post, hope it doesnt show.

Interesting note from the pilotsbasketball.com site... John Bailey is listed as a senior.