Did this happen while I was out of town?

From Lawrence, Kansas, no less. Geez, do you think Garrett has taken on a bigger portion of the recruiting workload -- notwithstanding having a "young" family?

I have no idea, but I'd say the recurring climate has changed a lot everywhere in the last 15 years or so, and appears to go in cycles at every program.

Seems the recruiting is coming around. Garrett seems very excited about the 2013 class as well. Nice also that Kendall is down with the Rush getting a jumpstart with 2 from that class.

According to Prep Friday in this morning's Oregonian (the printed one), Hannah Griffiths-Boston, a co-captain this year at Grant High School, has committed to U of P for next year. A former teammate of Parkes Kendrick.

Any GK prospects?  Will Downing be our keeper next year?

Auto-Pilot wrote:Any GK prospects?  Will Downing be our keeper next year?

Nichole will be back. Also we have a committ from Taylor Luty (Sunset) for next year.

I heard that Luty had some issues and may lose her scholarship.

Looking at what you can see on-line she doesn't look like a fit for UP.

gnarly wrote:Looking at what you can see on-line she doesn't look like a fit for UP.

gnarly wrote:Looking at what you can see on-line she doesn't look like a fit for UP.

A suggestion:  Don't pursue it.  A lot of young ladies and men can be immature and post some very dumb things on social media. The fact that they do that does not really convey much about them.  Forget it.

Wait, we’re talking about some high school kid’s social media writings, not a recruit’s athletic performance?  If so, thanks for the good counsel, UPSF.

A. It is one thing to follow a coach, a team, or a sports writer on social media, but to follow a high school kid could be just plain creepy.  Kids are generally writing personal messages to their friends….but neglect to lockout their account to the public.

B. Seriously, an adult really shouldn't take the musings of a teenager on social media seriously.  I’m sure many of us have had to advise our teenagers about the long term downside of public stupidity.

C. If any of us here on PN are communicating with a potential UP recruit….that is contrary to the NCAA rule book.

What I heard has nothing to do with social media.  Since I have no first hand knowledge I'll not comment anymore on this topic.

Madi Hall transferring to Colorado . . .or so it is reported.

Found this online while looking around for info on Madeline Dieker:

Junior Madeline Dieker knows she’ll be going to a division one school to play soccer.

“I am very nervous! But very excited at the same time,” Dieker said.

She has verbally committed to the University of Portland but can’t sign her NLI (National Letter of Intent) until her senior year. Portland contacted Dieker through email, after talking to her club coach in Arizona last fall.

The exceptional academics, beautiful campus and highly competitive soccer atmosphere factored into Dieker’s decision. The University of Portland is also a catholic school which “was important.”

Dieker understands the advantages and disadvantages of committing early.

“I’m able to meet and get to know the soccer team as well as the other commits, and I don’t have to worry about any last-minute decisions for college,” Dieker said.

However, she was rushed into committing so she could choose a college before other students and athletes did.

Though Dieker still has one year of high school left, she looks forward to college. “I am mainly excited to just be in a college soccer environment,” Dieker said. “And I hope it challenges me to become the best I can be.”

Her parents were also involved in swimming and football in high school, but they never went through the college recruiting process.

“They have been great support through it all,” Dieker said. “They are very excited and have already been stocking up on Portland fan gear.”

Dieker is optimistic about her future.

“I will take the sport as far as it will take me,” Dieker said. “It’s an honor to be going to a D1 school for sports. It was always my dream, and I try not to take it for granted.”

TRANSFER for Mikayla Elmer From PORTLAND TO UTAH.


Two transfers out of the program this year.


Given that LOIs are to be signed in February it will  be interesting to see if Pilots add more players to their commitment list before then. They obviously are in need of a goalie . . .at least there is no public indication yet that another has committed to the Pilots.

I am sorry to see Mikayla go, because I wanted her sister to come to UP. It now looks more likely, although not a shoe-in, that Utah will get the edge there too.

It's nice to see there are still people who feel like junior year is early for committing. As we can read in the Times, EIGHTH GRADE is the new early. Interesting article: as presented, everyone is against it—recruiters, club coaches, parents, players—and its against NCAA rules, but hardly any will stand up and not do it, because they feel others are doing it and they'll lose an edge if they don't. Maybe some parents would stand up against it if someone spelled out the down sides to them.
http://www.nytimes.com/2014/01/27/sports/committing-to-play-for-a-college-then-starting-9th-grade.html?src=me&_r=0

Yeah ' we are recruiting too early.

Clubs are making gobs of money selling the idea we can get your kid into the dream school.

Every coach on the planet wants to make sure they don't miss out on a top 10 kid.

Coaches are quoted as saying how stupid the early recruiting is -- on the sidelines of an eight grader's game.

His main complaint isn't that it is bad for the kids and that aren't ready to decide, but that kids change in 4 years and his choice will be wasted.

NCAA rules say you can't contact a kid before Junior year so you go after grandma and the coach.

And on the sidelines of the kids game the parents are playing the competitive "Anson offered my kid a car" game.

And it is all up to the parents to stop it?

Interesting comments about this subject. To baseline, I'm in the camp that recruiting kids before they are juniors is ridiculous. But coaches are doing it.

In taking our daughter to some colleges, she got together with coaches at a couple of programs. One of which told us many of the coaches at the major programs are already working on putting the finishing touches on their 2016 recruiting classes. That pretty much means they are trying to lock in kids as Sophomores or Freshmen. While he didn't agree with the practice, the coach told us, for the most part you can get a sense for what a field player will be like when they get to college, but Goalies take more time to mature. A he was from a lower level D1 program, he wasn't in such a rush to fill out his recruiting class and hoping to uncover "hidden gems."

I found his comments interesting as I thought back to a couple of former UP players that came in with great "accolades and potential," but never really developed. So I wonder how well the early recruiting practice really works.

I agree the system needs to be changed, but as long as the majority of coaches and parents are going along with it...

I also agree the Clubs are making a substantial amount of money to "get kids scholarships," so the notion of doing what is best for the kids gets thrown out the window. As an example, FC Portland sponsored a tournament two weekends ago. This was the weekend before high school finals. Think the kids playing would have been better served with an opportunity to prepare for their finals? Somewhere in here, I hope parent begin to realize, the balance is out of control. Until that happens the status quo continues.

That said, I think some are starting to question the prudence of kids playing year round. I know that Angie gave her goalies Nov and Dec off to recuperate/get a break from the club and high school seasons. It's good to see at least one coach recognize the kids need a break from the sport. If more did, there would probably be less burn out for the kids.

Yes.
And the flip.
UP seems good at getting recruits (who turn out to be stars) that no one else is looking at.
But perhaps those days over.


"Smith hints that he'll have a freshman goalie for the February letter-of-intent signing period and other "quality freshmen" coming into the program. 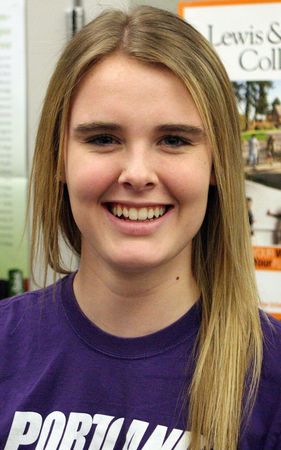