I guess our actually seeing him at the Chiles Center couldn't be real unless someone tweeted it....

Though the enthusiasm for confirmation might not be what it should be, coach Reveno likewise provides confirmation via recent twitter posts that he is seeking help to improve the three point shooting so that spacing may benefit. This acknowledgement confirms what many on this site have suggested is needed and perhaps confirms that Reveno does know what he is doing, if there remains doubt.

First: "3 best teams we had when won 60 gms in 3 yrs were perimeter oriented. Led country in 3 pt%. All-WCC guards. Agree, need to better."

And: "True. Slashers that need to attack in transition, off boards and isolations. Need to improve floor balance (3 pt % issue) for space."

Hope that Sharp and Zubizarreta, assuming we offered him, will provide floor balance by knocking down the three.

Both of the above were re-tweeted by Aitor himself (and the first one by Rev)... so I will take that as fact that he has signed!

Notwithstanding the tepid report from DD of his performance at the Chiles center, I hope that he can compete immediately at this level and that he can shoot the three like no Basque before . . .assuming he is Basque.

wrv wrote:assuming he is Basque.

If he's not Basque with that name he is doing a hellish good imitation.

He's coming to the right part of the world.

Colin Pfaff confirms that Bobby Sharp has signed with UP...so no surprises in Pilot land on NLI day.

Coach Rev on the new recruits:

Anyone got time to look up this player?

up7587 wrote:Anyone got time to look up this player?

He's a European scout in town for the Nike summit. About 5-11, has a Beatles haircut.

Anyone care to venture a guess as to which of our intrepid scholarship athletes will most significantly impact Pilot fortunes for the upcoming 13-14 school year?

I suspect that Sharp and Wintering will be competing for that distinction. Will be interesting to see if Rev uses Sharp at the point at all and whether he plays the two of them together, which may make us vulnerable defensively.

wrv wrote:Anyone care to venture a guess as to which of our intrepid scholarship athletes will most significantly impact Pilot fortunes for the upcoming 13-14 school year?

I'd say if you can answer the "who's the starting PG" question, you'll have the answer to yours.

A not unrelated question - when was the last time the Pilots had a freshman PG that started his first game on campus? Don't believe it was this century...

DeanMurdoch wrote:A not unrelated question - when was the last time the Pilots had a freshman PG that started his first game on campus? Don't believe it was this century...

The only one close that I can recall was Taishi Ito... but upon checking, he "only" started the last 15 games of his freshman season... Hmmm.

up7587 wrote:Anyone got time to look up this player?

He's a European scout in town for the Nike summit. About 5-11, has a Beatles haircut.

Thanks, haha. I didn't remember his name from the posts a couple weeks ago. And I was in a hurry.

With all credit to DTLegend for the original "box," I've updated the roster as we believe it to be:

Zubi is more a "combo" than a true PG, similar to the now departed Oskars but without the physical maturity and size. It's going to be an interesting October determining the starting PG with Carr recovering from knee surgery and Zubi and Alec just arriving from high school.

It's my belief that J. Bailey will NOT be on the roster after he graduates in May 2014....leaving UP with ZERO PFs on the roster from the current group.

For Pilots fans needing a bit of a “lift,” Zubi scored 30 points today in his club’s victory in The Basque Country Club Championships.

His junior team, Loiola Indautxu-95, won the first semi-final in overtime, 76-73, and now moves onto the final and a chance to not only win the Basque Championship, but a chance to participate in the Spanish Junior Championship’s.

Big wins over teams named Loiola. Keep that trend going when you arrive on campus, Aitor!

Big wins over teams named Loiola. Keep that trend going when you arrive on campus, Aitor!

Awww, who am I kidding...I cheated and looked at the guy that up7587 found the other day.

I saw this interview (written in Spanish) on a website that features Spanish players who play at various places in the US. I took two years of Spanish at UP and I’ve lived in Spain and Southern California, but it was all some time ago....regardless, here goes my shot at translation:

Aitor Zubizarreta is a Spanish player who plays for Iraugi SB and has verbally committed to the University of Portland. (Since this interview he has signed a LOI with UP).

Q: You've been selected to the Spanish team at the junior level for a number years....is that your best basketball experience so far?

A: None of my experiences were better than another, but in the end my selection to the Spanish team was a nice experience with many good times. I played with some very good players and traded uniforms with many of them.....those were some memorable experiences.

Q: Focus on your game. You're a scorer. What improvements do you want to make in the future prior to your professional league play?

A: Well, I play as a combo guard, SG and PG, and as I go forward I would like to be a complete player.....to help my performance at both positions.

Q: You've committed to the University of Portland. How did you come about taking that step? Was your decision complicated?

A: My family and I think that to continue playing at a high level, and continuing to study to get a college degree, the USA is the right place. I was very sure in selecting Portland and I did not hesitate much in choosing UP.....because in the end, they were ones who showed the most interest in me and treated me the best during recruiting. Then I made the visit, and we thought it was the right place for studies and basketball.

Q: We know that you have visited Portland. What did you most like about the city?

A: Everyone I talked to spoke well of Portland, and I know someone who was three for three years, and he told me that it was an OK city. What I also like is that is similar to the Basque country.....raining much of the time...I will feel at home there.

Q: What do you expect from your freshman year at D-1 with the Pilots?

A: I look for a tough season but at the same time a season that will help me a lot to grow as a person after leaving family, friends, and the club (Iraurgi SB)....it will be complicated to be without them, but it will surely help me a great deal to be there. And I expect to help the team as much as possible while earning minutes and enjoying myself.

Q: What is the objective you have in mind?

A: The aim I have in mind right now is to win all matches with my club Iraurgi, and then face the future while attempting to win the most games possible with the Pilots while improving every day and winning the league race.

Finally, I would like to thank all those who have been at my side all these years, family, friends, all members of the club, players and referees….without them not I would not have gotten this opportunity to play in the USA. 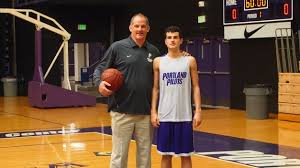 So, any good HS PFs available?

Tanner Lancona is a no (down to K-State, BYU, Saint Louis, and Colorado State). Fast-rising Jamal Aytes is gonna be a no (he's drawing interest from Pac-12 schools along with K-State).

Anyone else out there?

Well that was fast...

Great weekend recruiting. Received a commitment from a transfer and did some solid work evaluating HS players. Only negative was...

..,jamming my thumb protecting my coffee from a loose ball in the 8 am game. Both ease of injury and pain level reminder of getting old...

Yeah, I'm assuming that he is not refering to Sharp, but he could be. I've done a quick search and haven't found any information so at this point just wait and see who can find any sort of clues online.

I think it is safe to say that it isn't Sharp, as he has already signed: LINK.

Ha-ha. The O2 level in that thin air was only about 5% after a very short conversation with a current Pilots player in Las Vegas.....we'll just have to see what shakes out.

Regardless of who it is, if it's a D-1 transfer, it leaves the PF position very, very thin for next year!