DoubleDipper wrote:That is the same reaction our two Finish women’s players had, and it is also almost word-for-word what Oskars said during his first summer in Portland.

Not the best recommendation, is it? Those aren't the kind of 'one and done' players we would hope to have.

Well, I think I found the right guy who retweeted Bryce last night.

If his game is nearly as awesome as his name I'm in.

If his name game is nearly as awesome as his name I'm in.

You can search his name and find some video and judge for yourself......

DTLegend wrote:Also, if you want to read into Rev's tweet (as I like to do), have at it:

I'd say it's once again time for Deaner to change the title of this thread by adding a third name.

If that is the case, judging by Rev's reaction, he seems pretty excited about where the program is heading. So that's a good sign??


Obviously some of the positions can be changed (Pressley can play point, as can Carr, Ehlers could probably play the 3, as could Thieleke) but this gives a pretty decent idea of where we are.

And, if all the planets align, we may even see Oskars back for the 2014-15 season, with graduation/eligibility ending in 2017.

I recently read three tweets from Oskars that give some hope for his return to Portland one day:

That made all the difference in the world for me... I have nothing but love for you Ptown!

Man, I needed that wakeup call….I was heading down the wrong path but I’m back on track now.

Even when I was close to defeat I rose to my feet!

I’m still guessing Oskars can come back to UP once he meets certain conditions outlined by UP. His coaches and his teammates want him back, his fans want him back, but will he every come back?

I’m also guessing it’s going to be at least another 14 months before he is eligible to return…..a lot can happen and attitudes can change between now and then….I personally hope we see him enrolled at UP and playing in the Chiles Center again!

DoubleDipper wrote:I'd say it's once again time for Deaner to change the title of this thread by adding a third name.

Kid shows a ton of skill in this clip. As suggested by DD, tough to gauge comptition -

That clip looks like from a while ago. Those kids look pretty young.

I wonder if he is related to Andoni Zubizarreta who played for Barça and was Spain's keeper through four World Cups? He is now Barça's director of soccer operations. 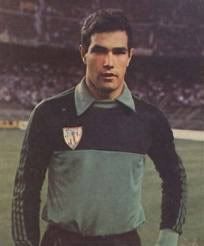 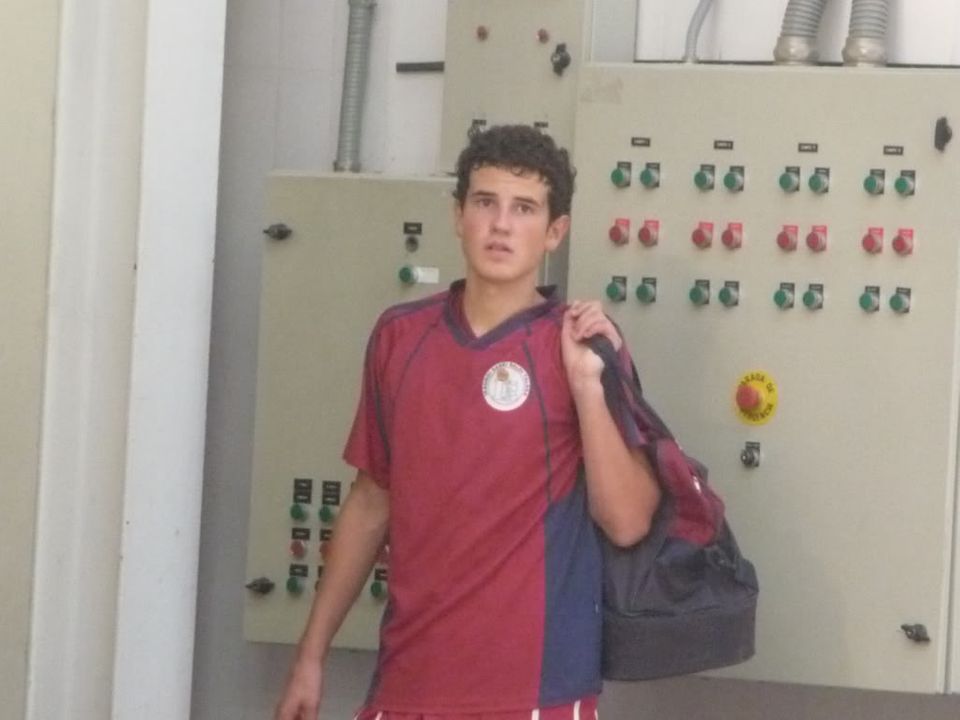 How many Zubizarretas can there be in the World? Is it the Basque Smith?

DTLegend wrote:Also, if you want to read into Rev's tweet (as I like to do), have at it:

Dan Hurley wrote:Its invaluable to recruit kids from great programs/coaches. Been coached and corrected not just enabled/stroked. Been held accountable.

For those of you with a cubical well away from the boss, here is most of a game in which he scored 35, the game was on Feb 9. He is listed at 6'3" in the credits. #9 in red. The clip says Basque junior country league.

PurpleGeezer wrote:That clip looks like from a while ago. Those kids look pretty young.

The senior club is (I think) like the farm team for the top team in the ISB club, which plays in the Silver League in Spain - the third highest level of Spanish basketball. The top team has former VCU forward Lance Kearse on its roster. Aitor actually played a game at this level a couple of weeks ago - I'm trying to drag up a clip on that.

Aitor is wearing #6 in this clip and comes on for about five minutes the start of the second quarter (18:52 in the video).

Haha, they couldn't get but four letters of Zubizarreta on the shirt

Bill Johnson is going to have his tongue twisted in a knot next year.

PurpleGeezer wrote:Bill Johnson is going to have his tongue twisted in a knot next year.

Maybe. I wonder if one of the point guards will redshirt next year.

up7587 wrote:Maybe. I wonder if one of the point guards will redshirt next year.

I've seen all three of UP's recruits in the Chiles Center, and even though it was quite awhile ago that Alec was in Portland, Aitor is the one of the three that will have the most difficult time competing physically, IME.

We all know anything can happen between now and WCC play next December, but if any of the three get’s significant minutes, it will be Bobby and Alec, and Aitor will have time to develop.

If this player is Portland bound, it is clear that Reveno is seeking outside shooting, a factor that had more effect on the fortunes(state) of this program than the repeated suggestion that the attitude of those in the program or just outside the program is lacking, and only if improved the three point shots might fall and the winning percentage improve. From the clips, this fellow appears to have a shooting touch similar to Sharp, and if they both can get that shot off under pressure, . . .Go Pilots.

This being a more direct route to improving the program, I prefer it.

In assessing the greatness of the day for the Pilots, I am prepared, but hesitant to defer to Reveno's judgment. If next year we return to the days of raining threes on opponents, well then, it was a great day.

Keeping in mind the current scholarship situation, I assume we are not going to sign another player, so no Luka Bazooka or European wonder next year. No indication, I assume, that anyone else is departing this year?

Reveno writes that it was a "great day" for the program and on the Bluff. Might the reference be to the weather? Or is Reveno referring to the commitment of a recruit? If so, does Reveno use the word properly, excluding the mundane use of great suggested at the end? If Reveno knows the definition, and he might just, does he use the word in an objective sense? Are we to assume that the program's fortunes were moved forward to an extent "remarkable in magnitude?" Is Zubizarreta "remarkably skilled" or "superior in character or quality?"

I hope Reveno is not misusing the word. In my mind when the word is used I think Ravio or Sikma or even some long ago players . . .but that might be too much to hope for.

1
a : notably large in size : huge
b : of a kind characterized by relative largeness —used in plant and animal names
c : elaborate, ample <great detail>
2
a : large in number or measure : numerous <great multitudes>
b : predominant <the great majority>
3
: remarkable in magnitude, degree, or effectiveness <great bloodshed>
4
: full of emotion <great with anger>
5
a : eminent, distinguished <a great poet>
b : chief or preeminent over others —often used in titles <Lord Great Chamberlain>
c : aristocratic, grand <great ladies>
6
: long continued <a great while>
7
: principal, main <a reception in the great hall>
8
: more remote in a family relationship by a single generation than a specified relative <great-grandfather>
9
: markedly superior in character or quality; especially : noble <great of soul>
10
a : remarkably skilled <great at tennis>
b : marked by enthusiasm : keen <great on science fiction>
11
—used as a generalized term of approval <had a great time> <it was just great>
— great·ness noun

WRV - I know you were just using him as an example but as we talked about him a few months ago, I thought I'd mention that I am unaware of the Bazooka receiving any D1 offers. I do know that he basically has his pick of any CIS school, though! SFU is also after him so he may be more of a solid D2 prospect than a potential mid-major PF.

DeanMurdoch wrote:
WRV - I know you were just using him as an example but as we talked about him a few months ago, I thought I'd mention that I am unaware of the Bazooka receiving any D1 offers. I do know that he basically has his pick of any CIS school, though! SFU is also after him so he may be more of a solid D2 prospect than a potential mid-major PF.

I too have kept an eye on Bazooka and, as you say, there has been no activity whatsoever from the lower 48 D-1 schools. I did see Luka was touring with the boys and playing ball in China; so that's a good early life lesson in diplomacy. We'll have to ask Pooh if he saw him play.

A few nice words about Pilot commit Bobby Sharp and Reveno's reasons for seeking the aid of his basketball skills next year. Enjoy.

Talk about it in the Message Boards


Sharp elevated his profile among four-year coaches this past season
When you come out of high school with a solid shooting touch and expand on that plus add other assets to your game while at a community college, scholarship offers befriend you. This describes the path taken by Bobby Sharp and now he's on a journey north.

The former Cardinal Newman High and current Santa Rosa Junior College backcourter enjoyed a remarkable season, one in which he averaged a team-leading 17.3 points per game on 47% overall shooting, 44% from long distance (261 attempts) and 87% at the foul line. The 6-footer was also credited with 47 assists. Such contributions earned him California Community College First Team honors and elevated his profile among four-year coaches.

Eric Reveno, who knows a thing or two about northern California hoops from his days at Stanford, needed to upgrade his Portland squad's shooting and scoring. The Pilots were accurate with 41% of their shot attempts in the recently concluded season, 31% from beyond the three-point line. Even at the foul line, it was a need-to-improve 68%. Plus, 61.0 points per outing won't win all that many contests.

Need met talent and, after a recent official trip to the Rose City, Sharp now has a scholarship to Portland, a member of the West Coast Conference (WCC). That means he will be back in the Bay Area -- at St. Mary's, USF and Santa Clara -- during conference play plus Pacific is now also a WCC member.

"I really felt comfortable with Coach [Reveno] and they were very straightforward and respectful in explaining what they were looking for," Sharp said. "I met the guys and it all seemed like a perfect fit."

Sharp consulted his parents and Santa Rosa Coach Craig McMillan, with all parties offering thumbs up and he then cast his lot with the Pilots.

It's worth noting that Reveno has previously utilized long distance shooting as a significant part of his offensive attack. Departing after the 2010-11 season, 6-foot-2 Jared Stohl finished in the top spot for three-pointers made in the program.

Sharp is looking to major in communications.

He thanked "Coach McMillan, [Cardinal Newman] Coach Tom Bonfigli and [basketball trainer] Ned Averbuck for all the help they provided along the way and to my parents for all their support."

He got the opportunity to play a bit during his stay and reports that the rims in the Chiles Center are "great."

It's my recollection the two Pepperdine players that are transferring were of little help to the team on game day despite their great size.......and had injury problems too.

Probably a good move for the kids and PU too.

Hard to think anyone would leave Malibu voluntarily.