The game is almost finished and the score is currently 4-1. Looks like the Pilots are going to win this one.

RipCityPilot wrote:The game is almost finished and the score is currently 4-1. Looks like the Pilots are going to win this one.

The final score was indeed 4-1.

From what I saw of the UP defense, they allowed a lot of penetration during the game, and were often scrambling. They were fortunate that Gonzaga for the most part had trouble putting the ball on frame. There were also a couple of nice saves by Justin. The PK resulted from one of these many penetrations; a Zag had the ball in the area with a great opportunity to score, which ended up resulting in a foul in the box.

Well, knocking attackers down in the box could be part of the problem.

But other than that gaff and a period where Gonzaga controlled the midfield, it was a pretty bunch of scores for the Pilots. Ricardo Carrillo had a goal in the first 40 seconds and one in the second half that was a great blast , Jaime Velasco got his first career goal on a very pretty turn and finish.

But the prettiest was a back heel by Steven Evans when the Zags shut off his forward shot with a bunch of bodies. The highlight of that goal is a must see.

Yes. This kid is for real. I hope the video caught him running to the student section to celebrate.

The whole play was jogo bonito. Two nice assists on it from Carrillo and Velasco to set him up. The only goal I've seen this year that compares is Ellen Parker's against UNC.

Carrillo's first also had two pretty assists from the other two. I was just sitting down.

This first game of league play had to do wonders for the team's confidence after their beat-down in Seattle last weekend.

Not much to add to what's been written except to echo Geez' assessment that Evans is the real deal and his back heel shot from about 10 yards was the most "fun" goal I've seen from either of our teams this year.

Regardless of the goals and their beauty, if Justin hadn't been on his game in the net, this game could easily have gone the other way.

It is my recollection we split with GU last year with the home team being the winner each time.....it could really help our cause if we can repeat this performance in Spokane in November.

(As for penalty kicks; it's been pretty obvious that skilled and quick forward can turn UP's defenders around on occasion....that can result in a foul in the box at any level of play).

We tied at Spokane and won here last year.

From the zag report of the match

The Bulldogs lost for a second straight match to the Pilots, who won 2-0 at Portland in the second meeting last season. The teams battled to a 1-1 tie in the first meeting in Spokane last year, snapping a three-match Portland winning streak . Portland has won five of the last six meetings and leads the overall series 23-9-5 dating back to 1981. Since Gonzaga joined the West Coast Conference in 1993 the Pilots hold a 15-9-5 edge in the series.

Highlights are up. Enjoy.

Thanks; I enjoyed seeing the back heel flick from Evans even more on video .... I could watch it over and over again.

I think we neglected to mention the amazing back flip salmon embellishment from the zag on the PK award.

Hahaha, unless the spirit of Clive slammed him to the ground (Or should I say Hammered?), I'm fairly certain gravity doesn't work that way...

I didn't even pay attention to the gravity defying flop when I first watched the video.....why do the refs reward such behavior?

I know of a number of people who avoid watching soccer because of all the flopping salmon.....and I also know where there are some recently unemployed refs looking for work! 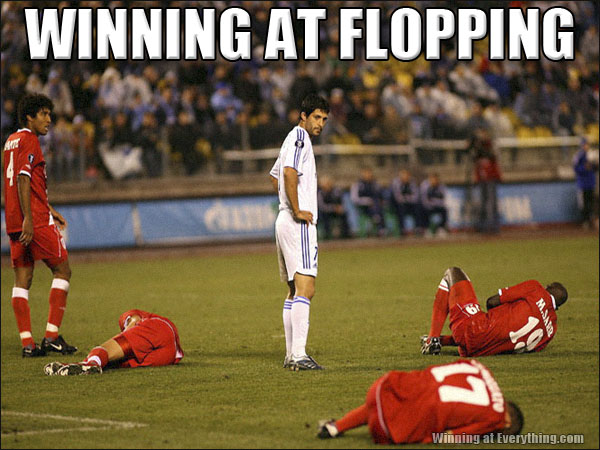 The fair thing would have been to award the kick and caution for embellishment.

I think that in general this year the defense, and really not just ours but a lot of defenses I have seen, have struggled with 1 v 1 defending. It seems like there is a lot of space on the wings (especially when we gave up 4 goals to Northridge) and there doesn't seem to be a lot of cover from the center backs until the other team gets in or close to our box. Then it results in some diving in to prevent a shot, etc.

Either that or the refs are over-exaggerating and wanna give the away team the benefit of the calls since they don't want to be called home-town refs haha!

Also though, I was particularly impressed with the offensive output last night as well. Often they've seemed to over-reliant on Stevie this year to get something done, and as long as the other team was aware of the threat the Pilots have been very one dimensional. Carrillo was tremendous last night and provided great pace and guile on the wing, reducing some of the pressure on the front line. The back heel was a great goal that started with a decision to attack quickly on the counter, with a pacey dribble and a few quality balls, something that I would like to see the pilots do a little bit more of. Too often this season I've seen the backs just clear it up the field without real rhyme or reason and possession is lost, whereas if they have a little bit of composure they might be able to find outlets to start counters