Great game for the women this afternoon. Cassandra Brown scores 32 as the Pilots beat Santa Clara in the first round.

KB put it together at the right time. congrats to her.
Birdie had a pretty good game, too.
when is the last time we scored 90? not this season.

My wife comented that Natalie was having a sub-par game,
15 pts. -- 12 rebounds yeah, i guess for her that is sub-par.

Yes, she was 3 points shy of her average.

The Pilots were not able to overcome the good play of USD and end their season this afternoon.

San Diego guard Dominique Conners has been a HUGE thorn in the side for the Pilots Women over the last four years. When the Toreros’ knocked Portland out of the WCC Tournament she gave her typical performance scoring 25 point in 26 minutes. To me, Dominique was always the brash, talkative extreme competitor with the fierce look that included a pomade aided Mohawk hair style and black mouth guard.

But guess what? Sometimes the athletes you love to hate are in fact really, really decent human beings with maturity beyond their years.

I spent a little time with Dominique after BYU knocked her Toreros out of the tournament and found that the reason for her toughness and maturity was that her US Army dad had been deployed to Iraq three times and wounded twice while she was in her formative teens. It simply “Made me grow-up fast” she said.

But the observation I made that sold me on Dominique Conners was when we boarded an elevator at the Orleans Hotel. As a crowd of about 50 basketball fans all rushed toward the elevator, they streamed by a gentleman in a motorized wheelchair also attempting to board. After two elevators full fans had passed him by, Dominique took over! By far the youngest in the crowd (she’s 21), she held up her hands while motioning for everyone to hold their position, and signaled the gentleman to pass the crowd and then helped him position his chair in the elevator.

As she, the wheelchair gentleman, and others proceeded to the floors above, I couldn’t help but think that it was one of the best examples of leadership I’d ever seen, and I’ve seen a few! Dominique will graduate from USD this spring and will no longer be a thorn our side, but her leadership and “fierceness” will carry her far!!! 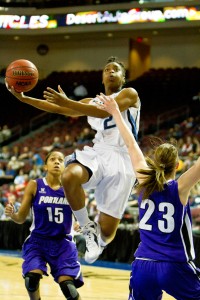 Dominique Conners vs. Portland at the Orleans Arena March 2, 2012

Great story about a special young woman, thanks for sharing it with us.