From their body of work so far this season, UP looks to be about the 4th best team in the WCC, but it’s still all about the matchups on the court and the team’s ability to be “up” for games against teams that are considered “lesser” opponents.

UP should not have trouble looking beyond Pepperdine, as PU (4-3) is currently a half a game ahead of the Pilots (3-3) in the WCC.....and PU should not be overlooked because, despite last night’s dismal performance against GU, they are a team that can surprise you.

Statistically, PU’s overall defensive ability is 3rd in the WCC behind BYU and GU….but they are vulnerable to giving up offensive rebounds….something UP should be able to take advantage of.  Offensively they play at about the same pace as the Pilots, but except for their above average ability to grab their own rebounds, they are at best “average” in about all other categories.

The Pilots will have their hands full with 6-6/245 sophomore Stacy Davis who can flat-out shoot and rebound and is projected to be an All-WCC performer before he’s finished.  Two other players to watch out for are 6-9/235 senior Brendan Lane, and freshman guard Jeremy Major.

The experts are predicting a very close game, but expect PU, the home team, to pull it out by a couple of points.  I haven’t seen Las Vegas line yet, but it might be a “pick-em!”

Looks to me like Coach Jackson is working with the BIGs and Coach Wolf is reviewing video with the guards on their way to Malibu for practice today.....  #tgif 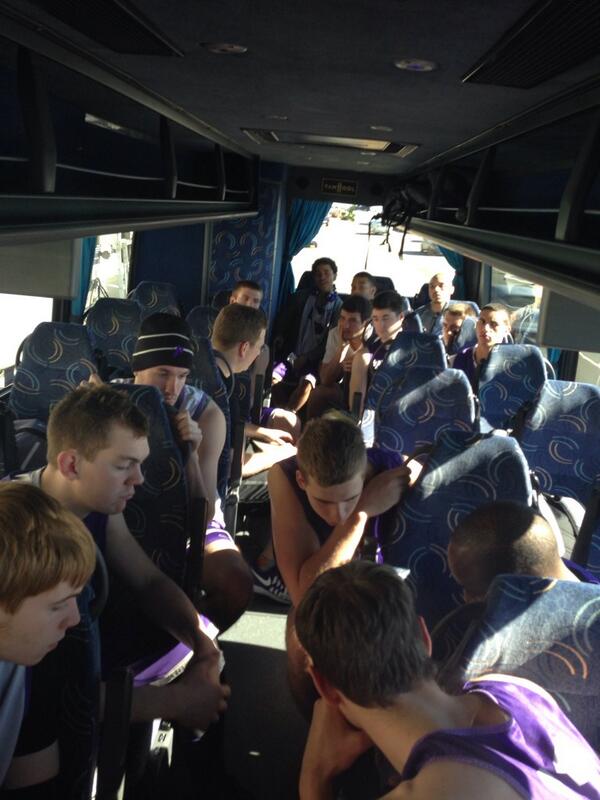 Umm, Bryce looks like he's still a little "off" from his stomach ailment

DoubleDipper wrote:The experts are predicting a very close game, but expect PU, the home team, to pull it out by a couple of points.  I haven’t seen Las Vegas line yet, but it might be a “pick-em!”

The opening line in Las Vegas has the Waves favored by 2 points....those were the closing odds at LMU after opening with a 4 point spread.

Pilots up 34-30 at the half. Turned on Gamecast at 16-8. Frankly, Pilots should be ahead by a larger score, Waves do not look like they are playing well. But they have gotten several drives for lay-ups, and second chance points. Pilots have missed lay-ups and taken some ugly long shots.

Clean that up and put this away in the 2nd half!

Ugh. And the Pilots crash back to earth. Missed lay-ups, untimely turnovers, and missed free throws. And, more than anything, inability to score points against the zone. The Pilots seem incapable of playing from behind this year. It was just a mediocre performance all around. Quite disappointing.

I think the issue was more that they can't play from the front, isn't it? They lead at the half.

Trend I've noticed about this team - slow starts in the second half. Seven WCC games played so far, FOUR have seen the opposing team go on significant runs to start the second half. I won't count SMC's 6-0 run as a significant one, they mostly traded baskets with Gonzaga for the first part of the second half, and only one time (against Pacific) did the Pilots have the jump coming out of the break.

I think if you were to look over an even longer period, going back several seasons, this starting slow in the second half is nothing new.

I've never felt it was a lack of effort by the players, but instead have credited the opposing coaches for making halftime adjustments.