The men' side has apparently added McMinnville's Dustin Munger to the list of players who will sign next week.

So great to get a 4 star recruit again who can run the show in the midfield. Hopefully, this is the beginning of a trend of landing some good local talent at the program...

Munger, a 6A all-state player and the two-time News-Register All-Valley Boys Soccer Player of the Year, signed with the University of Portland. He helped Mac stay near the top of the boy's soccer world in Oregon, leading the Grizzlies to three consecutive Pacific Conference championships and to the 6A state semifinals this season with a 14-3-1 record. 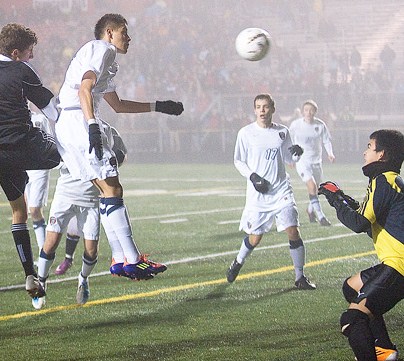 Yep, that's correct sailor. It was posted on the UP Athletics website and the PN women's soccer page yesterday.

The Oregonian is reporting that Hugo Rhoads, who committed early to UP along with signee Dustin Munger, has also signed a LOI with the Pilots.

DoubleDipper wrote:The Oregonian is reporting that Hugo Rhoads, who committed early to UP along with signee Dustin Munger, has also signed a LOI with the Pilots.

Hugo attends my high school, West Linn, I've seen him play and he's a beast! Can’t wait to see him play on Merlo!

Recruit news if you don't mind a little reading. It's good to see so many players from the Portland area. Hopefully they bring bigger crowds to Merlo along with their talents.

“This is one of the strongest classes we’ve had in a number of years,” said assistant coach Rob Baarts. “We feel this class posses both high-level technical and athletic ability, and I believe all of these guys will have an immediate impact.”

Jordan Baeza (5-10, 175) earned varsity letters at both Life Christian School and Century High school, and he shared Pacific Conference Co-Player of the Year honors with fellow UP recruit Dustin Munger last fall. He earned first-team all-league honors three times, and he landed on the all-state first team as a senior and the all-state second team as a sophomore. Baeza helped the Century Jaguars advance to the state playoffs as a senior, and he earned several national accolades, including being named the No. 9 “Player to Watch” in the Pacific Northwest for the class of 2012 by Top Drawer Soccer. He also was also named to ESPNHS Magazine’s Oregon Starting 11 in 2011.

A 2010 National Identification Camp participant, Baeza played for Oregon’s ODP Team and was the center back for the Region IV team. He helped his club team win five state titles, reach the regional quarterfinals three times, the semifinals once and the 2011 US Club Team Championships.

“Jordan reads the game very well, and he’s been on our radar for a long time,” added Baarts. “We’ve known he’d be a great fit for our program, because he’s a center back that likes to play our style of soccer.”

Matt Escobar (6-1, 180), who is the younger brother of current UP freshman midfielder Michael Escobar, played for Bellarmine College Prep, but mainly focused on club and regional teams. Escobar played for the ODP District 2 Team, and he was a member of the ODP State Pool. Escobar played for the De Anza Force Club team with fellow UP recruit Colby Trah, and he helped the team reach the 2010 and 2011 United States Development Academy Playoffs. The De Anza Force finished fourth in the nation in 2010.

“I like Matt’s size at center back,” noted Baarts. “He’s a little more of a hard-nosed center back and he brings a physical aspect to the game. Coming from a strong soccer family, we know what we’re getting in Matt, and we have strong expectations for him.”

Dustin Munger (5-10, 140) earned four letters at McMinnville, helping the Grizzlies advance to the state playoffs all four years and to league titles in 2009, 2010 and 2011. Munger, a midfielder, was the Pacific Conference Co-Player of the Year as both a junior and a senior, and he landed on the all-state first team in 2010 and 2011. A three-time all-league selection, Munger helped McMinnville post a remarkable 45-11-7 record during his career.

Munger played for both Oregon ODP and Region IV, and he claimed regional titles in both 2009 and 2010. A member of Santos FC and Portland FC, Munger helped his club team win the state title in 2011.

“Dustin is a midfielder who sees the entire field and his ability to find open players is impeccable,” Baarts said. “He brings a winning attitude to our program, and he’s the type of player that does what it takes to win.”

Hugo Rhoads (6-1, 160) is a three-year letterwinner for the West Linn Lions. Rhoads, who can play forward, left back or in the midfield, was named the Three Rivers League Player of the League as a senior, while also garnering first-team all-state honors. Last fall, Rhoads accounted for 28 of the Lions’ 33 goals (17g, 11a), helping West Linn to the league title. He is a two-time all-league first-team selection (2010 & 2011), he landed on the second team as a sophomore and he was league player of the year runner-up as a junior.

Rhoads has played with FC Portland since 2008, advancing to regionals in 2010 and club nationals in 2011.

“It’s very obvious when watching Hugo play that he is the type of player that loves to play the game,” said Baarts. “He’s a natural left-footer, he’s versatile, and he will find himself in several positions on the field.”

Colby Trah (5-10, 155) didn’t play high school soccer due to club and academy rules. He did play for the California North State ODP Team and for the De Anza Force Club Team. Trah helped his team reach the USSDA Playoffs in both 2010 and 2011, and he scored the game-winner in the 90th minute to help his squad advance to the USSDA Finals Week in 2010. Trah has played both in the midfield and at right back.

“Colby is a solid all-around player that every team needs,” Baarts said. “He’ll do what it takes to get the job done no matter where he plays on the field.”

Jaime Velasco (6-0, 165) earned two letters at East Anchorage High School before transferring to Westview for his junior and senior years. As a senior last fall, Velasco helped the Wildcats win the Oregon 6A State Title, was named the state championship player of the game, was named the state player of the year and is a candidate for the Gatorade Player of the Year. He also set a school record with 30 goals last fall, led the team with 18 assists and was named the Metro League Player of the Year. Velasco has two games with four goals, and he scored the game-winner for Westview in both the 2011 state semifinals and the 2011 state final.

“Jaime is a natural goal scorer,” added Baarts. “Scoring records at UP will be at risk during his four years here. He’s got pace, he’s strong in the air and he has a very competitive nature, which when matched with his talent will bring him success.”

Connor Wear (6-1, 190) was a four-year letterwinner for the Wilson Trojans, earning first-team All-PIL all four years. A center back and midfielder, Wear landed on the Oregon 5A First Team as a senior after garnering all-state honorable mention as a junior. The Trojans won the PIL title in both 2010 and 2011 and advanced to the state finals last fall. Wear, who is the first person in school history to earn all-league first-team honors four times, helped his club team win five straight state titles. His club team also was a regional finalist and a US Club National finalist.

“Connor is a versatile player in youth soccer playing both defensive positions and forward positions,” said Baarts. “He is big and strong.”