The team has no graduating seniors this year, but with the unknown status of Cassandra Brown and scholarships in hand, the Pilots are expected to sign West Valley (Juneau, Alaska) Senior Hannah Mattson to a national letter of intent tomorrow.

Hannah had a number of offers at the Division I level, including Nevada Reno, Fresno State, Colorado State, Eastern Washington, Denver, and Idaho State.

Hannah not only excels on the basketball court but off, as she maintains a 4.33 GPA!

In three seasons with the West Valley Wolfpack Hannah has scored 1, 326 points with an average of 15 ppg, 5 assists per game, 3 steals per game, 7.5 rebounds per game. Hannah helped her team in three seasons to a overall 73 and 18 record with a 35 and 2 Mid Alaska Conference Record.

Matteson, a 5'10" guard, was named the Alaska Girls Hoop Player of the Year by ESPN after her junior season. 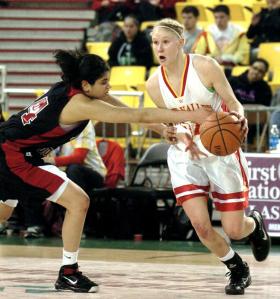 Sounds good, but does she turn it over?

As expected, 2011 ESPN Alaska Girls Hoop Player of the Year has signed an NLI to join the Pilots.

Already a 1,000-point career scorer entering her senior year at West Valley High School, the 5-9 Mattson can play either point guard or on the wing.

“Hannah is a tall, athletic guard who is as hard of a worker as you’ll ever find in high school,” said Sollars. “She’s versatile and can play either guard or wing equally as well, but her greatest asset is probably her work ethic. She simply does not stop and we’re very happy to have her.” 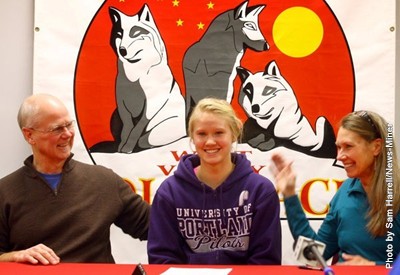