Ariel is a terrific player, and one of the real "gets" for 2013. She has been a force since she was a freshman at every level ( school, club, ODP, and nationals.)

Some who have seen her say she is the best in the state in her age group.

I thought we decided she was a UP commit last year, though, after this article in October 2010..

Viera’s goal for after school is to play at the University of Portland. She’s had a UP assistant as a coach, among others. Brian Gant, a former pro soccer player for the Portland Timbers and a local youth coach for FC Portland, has also coached her and may again.

You may recall it was the Gant connection that brought Christine to UP.

Anyone know anything about this recruit on https://sites.google.com/site/soccerrecruits/
4/2/12 ADDED 2013 verbal commitment for Parkes Kendrick (M - FC Portland) - PORTLAND
Adding: After a short bit of research she was on the 6A Girls All State Team this year.

Parkes Kendrick was on varsity at Grant HS as a 9th grader in both soccer and track.

She not only was all-state this past season, but was player of the year in soccer for Special District 1. She is listed as a MF.

Parkes is a great kid. Played varsity at Grant as a freshman. This year she payed center mid and was POY in her league and one of the few juniors to make all-state. Can run for ever.

Update on 2013 recruit Parkes Kendrick. She was fourth in the 3,000 meters at the recent OSAA 6A state track meet. As I said earlier, "she can run for ever".

Elizabeth Boon
A former member of the United States' U-15 and U-17 Girl's National Team, Washougal's Elizabeth Boon is committed to play soccer at the University of Portland. Ellie was a Washington 2A First Team All-State selection.

Boon, a member of Vancouver Timbers, is the No. 2 player in the Pacific Northwest and No. 43 in the entire country.

Stonehouse wrote:Elizabeth Boon
A former member of the United States' U-15 and U-17 Girl's National Team, Washougal's Elizabeth Boon is committed to play soccer at the University of Portland. Ellie was a Washington 2A First Team All-State selection.

Boon, a member of Vancouver Timbers, is the No. 2 player in the Pacific Northwest and No. 43 in the entire country.

We gotta wait a year, but that's excellent news. Love it when we can get "locals."

Oregon has a new member in its girls soccer 100-goal club as Scappoose’s Ariel Viera scored her 100th career goal Wednesday in a 15-0 win over Tillamook.

Viera, a forward who will sign with University of Portland in November, scored four first-half goals against the Cheesemakers. Viera is believed to be the fourth girl in Oregon with 100 career goals.

Scappoose coach Chris Dorough said they have been aware of the 100-goal milestone all season. The durable Viera, who has missed only one game during her high school career, has scored at least 20 goals during each of her four seasons.

“She’s very good at hitting the corners, and very dangerous in the air. She’s pretty short, but has a high vertical, and she’s very aggressive in the air,” said Dorough, explaining Viera’s playing style. 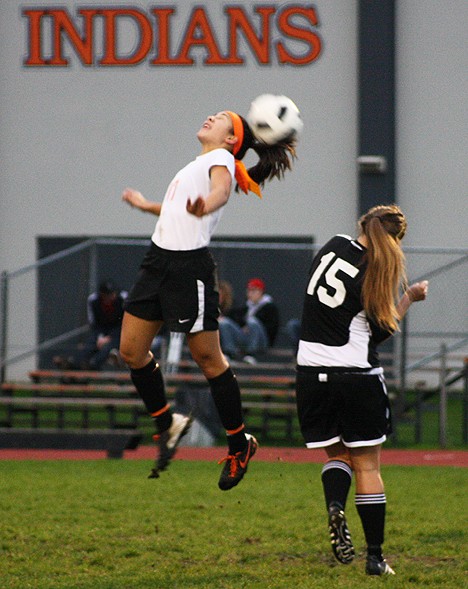 Scappoose has until July, 2017 to get rid of the Indian mascot.

Great accomplishment by Ariel. UP is getting a potential great one.
It will be a long time (never? ) that anyone surpasses Tiffeny's 57 goals in a season.


they should change to a mascot that doesnt demean other ethnic groups. maybe change the name of the town to London.

After Ariel scored her fourth goal of the first half to reach 100, she dropped back and played defense the rest of the game. In a sporting gesture, her coach had talked to the opposing coach before the game (that Scappoose won 15-0) and told him that as the two teams were not evenly matched, as soon as Ariel got her 100th goal (which she wanted to do on the home pitch) she would then go on defense.

As the area that is now Scappoose was once a meeting ground for all the Northwest Indians who gathered each year to hold their contests of skill, gaming, feasts, trading, and tribe Pow Wows, and the area was named “Scappoose” by the Indians, it would seem Indians might be an appropriate mascot.

But then again, I don’t live in Salem, so I have no idea what is proper for Scappoose!

2013 recruit Parkes Kendrick, from Grant HS, took 3rd place this morning in the Oregon girls' 6A cross country meet. She led Grant to the team title. Then this evening, while we are watching the Pilots, she will be helping the #2 rated Grant soccer team as they open their state tournament play. Quite a double-sport talent.

Ariel Viera appears close to jumping into second place on the all time scoring list.

By my count, it was her 37th this year and puts her at 115, one shy of Laura Schotts' second place figure. she has a ways to go to get to Tiffeny's 131 record, but even that doesn't seem impossible any more.

What does seem out of reach is Tif's 57 goals in a season mark.

There has been some confusion on how many 100 goal scorers there have been in Oregon girl’s soccer….

In the Oregonian article I quoted above, it was stated that UP recruit and current Scappoose player, Ariel Viera, was the fourth player ever in Oregon to achieve this milestone.

But, not so fast…….our old friend and former UP SID, Steve Walker at the OSAA states she’s actually the seventh.

In just a few minutes, Scappoose and Ariel Viera tangle with Gladstone and reigning 4A Player of the Year Amber Jensen, who has 99 career goals. This semi-final match will determine which team will go to the final on Saturday at Liberty High School.

It will be a very interesting matchup because the last time these two teams played, Scappoose coach Chris Dorough moved Viera back on defense to stop Jensen. It remains to be seen if he’ll repeat that tactic, but Viera is a capable defender. In fact, during an interview earlier this season Viera said she has been playing defense on her club team and she thinks that’s the position she’ll wind up playing at UP.

I look forward to seeing her next year.

Apparently Amber Jensen DID score her 100th goal in today's game against Scappoose.

Geezaldinho wrote:Gladstone (14-1-1) beat Scapoose(13-2-0) 4-1 today, ending Ariel's high school career. The box score doesn't show who scored Scappose's goal, of if Jensen scored for Gladstone to get to the 100 club.

I look forward to seeing her next year.

According to the recap, Jensen scored twice, while the only goal credited to Scappoose was an own goal.

I saw on BS that pilots have 6 recruits for '14 coming in. Also, with 7 recruits at the last regular season game and Parkes playing for Grant that night, any word on who is the 8th recruit for '13. Seven are currently list on the recruiting spreadsheet.

I suspect the Real Col or SD Surf girls are the higher probability.

per Top Drawer Kaycie is UP bound.

Don't stop now, you are on a roll

If it is Kaycie Young(MF), she will be in the 2014 class. Watched her play. Versatile player with excellent ball handling skills.

Yes, I was right in that it was one of the girls at ECNL ID2 camp with our other 3 recruits for '13. There are similar comments out on BS that Ms. Young is a top MF that can play anywhere.

Kaycie Young announced on the recruiting site for the class of 2014.
https://sites.google.com/site/soccerrecruits/