I'm surprised at the lack of student support this year! I've been to a couple games (when school is in session) and the student support is pathetic (esp st. marys game). Granted they are probably scarred by the Porter era teams but this is a fun team to root for and its disappointing to see no support. I dont expect it to be packed like a Gonzaga game yet but at least you have your die-hards that enjoy hoops and will stand the whole game who are not even present. Also, is it me or is the pep band really bad now??? I used to really enjoy listening but something is off there.

From my experience, the issues raised here have little to do with covid, the specific coach at the helm, or even the team’s performance. These same issues have been consistently noted here across the last three coaching regimes, even during the relatively competitive years under Reveno.

Last year? There was a semi organized group of students, as well as a group of “independent” cheerleaders. That helped.
During Reveno’s era the band was big time entertainment, especially our purple wigged band leader from the music department.
The band was behind the basket not stuck up with the students. The wild and crazy band leader was worth the price of admission alone:)
Why not try to reinstitute the fun stuff, like that
There were also “couches” where the the baseline high roller seats are now.
I think the Atletic Department and School need an entertaining product.
We have a great new coach and new team. They are playing so well.
But people, maybe especially students, face a choice: Just party or go watch a basketball game.
LETS MAKE IT BOTH!

Howdy. Believe me, we'd LOVE to be courtside once again, but COVID restrictions have us in section 1. It's really hard to hear the rest of the band from inside the band right now (I almost never hear the trumpets from my seat in the drums). Being spread out twice as much (or more) as we'd be otherwise is rough, but we're making it work. If you're seated across from us we sound pretty good, but just about anywhere else it sounds off. That's one more reason why we sound good courtside--it's like most bands at football being in the endzones these days, playing into the stadium rather than from a side.

Got it with COVID but post COVID you need to be back behind the basket.
My overall point is that until theUniversity focuses on providing “entertainment” as a reason to go to the games, student attendance will remain low except for big games.
There are so many ways this could be done.
Start with a student focus group asking “what would it take to entice you to go to basketball games”
The Alaska airline paper plane toss seemed to bring a few out.
BUT brainstorm this with yourselves —-
It’s all about marketing -“come for the fun and see a basketball game too!”

Right on, Snus. A similar approach should be taken for the surrounding North Portland and St. Johns neighborhoods. UP sports could be a source of pride and neighborhood identity ("Those are OUR local neighborhood Division I teams!"), but UP makes little (zero?) effort to engage with this untapped base of potential fans.

So how about “Pilot Nation” get organized and request a meeting with powers that be - Athletic Department and whoever.
This would. E edit from a professional marketing effort - maybe in partnership with a student business department “marketing class,” if they have one.
Coach and Team are putting “the product” on the floor, the University needs our help and we can motivate them.

And yes, the No Po neighborhood associations and businesses need to be part of this effort. There are community pride and economic benefits.

Many of us have been fighting for years to increase the noise in the Chiles Center, and we got there for a while a decade ago.  Now the only raucous crowds in the WCC are in Provo and Spokane, and now in Moraga too where the gym can hold only 3500 people. (Although, I was impressed with the atmosphere at Santa Clara last night).

USF went into last night's came at home against UP with a NET 32 (they are now 41 and BYU is 46...both on the bubble), and this screenshot shows you all you need to know about atmosphere and the fans turning out for a Tuesday night game. 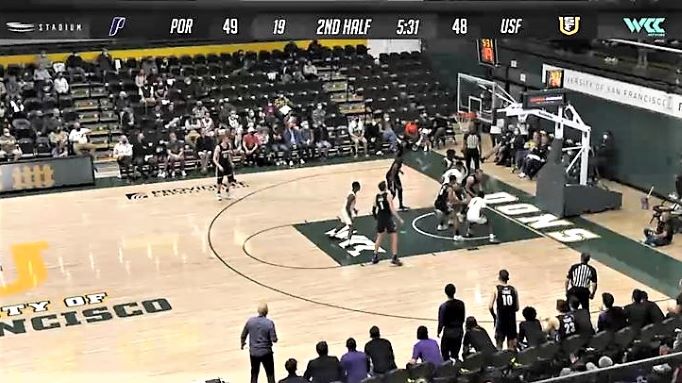 Legs once called War Memorial Gym a "high school gym" and immediately regretted saying it, but it can accommodate 4200 fans... 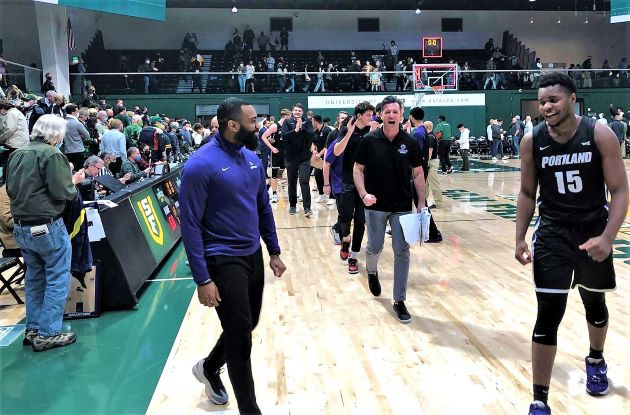 A few suggestions from elsewhere:
- PSU used to have a drum squad at their basketball games. No bass drums, which would probably be too much, but 4 or 5 snare and hand drums. Just a scaled down version of the Villa Drum Squad.
- USD put two recliners behind one basket and would pick two people at random who would get the recliners and free food for the game.
- USD also had a rubber chicken game. Two people on each team, one shooter and one catcher. One shoots a rubber chicken in the air using one of those tee shirt launchers and the other has to catch it with a bucket on their head.
- USD also used their big screens to do music and entertaining shorts for the fans during time-outs.

It turns out just winning brings a better crowd to watch.

And baseball players are better at throwing t-shirts than the dance team.

This thread needs to come back to the top. .

Saturday's game was a great atmosphere! Student's did a great job of leading the rest of the crowd. My nieces and nephew got to experience what a college basketball game should be. I'm glad they got to see such a great game even though I bought them a large bag of Skittles and they didn't bother to share with Uncle Blacksheep!

Seriously though, you buy your brother's children Skittles and they don't share. What is this world coming to!?!

Worst of all, my brother, who shall remain nameless (it starts with Rochin), went to get a beer during the game and didn't get me one. Any questions about where his kids get it from?

I overheard the seats with backs are all getting replaced sometime before next season. No details on when or precisely what, but it sounded like an upgrade. I don't know if that means the seats will overall be nicer or just new versions of what's there.

dholcombe wrote:I overheard the seats with backs are all getting replaced sometime before next season. No details on when or precisely what, but it sounded like an upgrade. I don't know if that means the seats will overall be nicer or just new versions of what's there.

They replaced the first couple of rows on the team side a few years back and the seats are less comfortable than even the worst worn out seats.

Hey, after I can't remember how many years, I've got my seat molded to fit my, well, you know.

Similar topics
» I See A Chiles Center and I want to Paint it Black...
» Changes in Chiles
» RIP Earle Chiles
» SCU @ Chiles, Saturday, 3/2 7PM
» ESPN behind the scenes @ Chiles