Next up, another Big Sky team, the MSU Bobcats from Bozeman.  Playing in the Incarnate Word Tournament.  The Bobcats are 1-3, losing road games at Colorado, So Dakota St and New Mexico.  Their win is over NAIA Rocky Mountain College.

KenPom has them at 176 (UP is now 307).  ESPN Power Index says 70% UP win. MSU's last game was Saturday, so they will have fresher legs than the Pilots.  Leading scorer is junior  Jubrile Belo, a 6'9" 240# forward from London, averaging 16.3 pts and 5.3 rebounds. Two other players score a double figure average, and they are 6'7" and 6'8", so MSU is taller the UP opponents so far.  They play nine players in their rotation.  They average a little over 80 ppg, similar to UP.

They've played a tougher schedule, with all D-1 games on the road.  They will be a challenge for the Pilots.

Interestingly, the Pilots play the Bobcats again on Dec. 19th in Bozeman. Odd to play a preseason opponent twice.

up7587 wrote:Interestingly, the Pilots play the Bobcats again on Dec. 19th in Bozeman.  Odd to play a preseason opponent twice.

You might remember that the Cardinal Thanksgiving Invitational at one time included D3 Trinity of San Antonio, and MSU was substituted when Southeast Missouri St. and UP balked at playing a D3 team.

Back in the day when UP was in independent

it was not unusual at all to play a school twice in a season, but then again it was also even more difficult to fill-out a schedule than it is today.

Don't expect anything less than a battle here. Montana State took Colorado to OT on opening day and probably should have won that game given they were up 5 with under a minute to go.

For Coach Legans and the EWU transfers it'll be a familiar opponent in an unfamiliar location as most of MSU's players return from last season (Washington transfer RaeQuan Battle the notable newcomer).

Legans beat MSU 8 out of 9 times with Eastern including in each of the last six meetings... so I doubt Coach Sprinkle will be playing around on Friday. 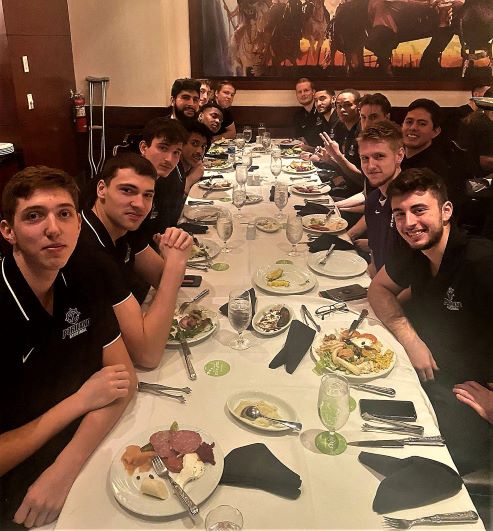 The Bobcats were picked third in the Big Sky Conference Preseason Poll and are led by Jubrile Belo's 16.3 points per game.

Great picture except for the crutches on the back wall

Looks like a broadcast should be up and running for today's game. The UIW/SEMO stream looks okay.

So much for the noon start

Hey, it could have been later as the first game almost went to OT.

I thought we would see more of Yaru Harvey with Perry out but Sjolund seems to be the recipient of the extra minutes so far.

And anyone know what the score is at the half? The one on the broadcast at times hasn't matched up with the actual scoreboard in the gym. And right now the broadcast says 34-33 MSU but live stats say 34-34 tie.

Getting cold in here... you wonder how long the D can keep the Pilots in this one.

Worst officiated, most disjointed game of the season.

UP had no answer(s) for Mohamed and Adamu.

UP's bench was of little help...22 hours until the next one.

Listening (and trying to watch) the game, I felt the Pilots were making a lot of mistakes. The stats say otherwise. They were 47% from 3P, 50% overall, and 17 of 19 on FTs. Only 10 TOs. Basically missed a couple shots, and gave up a couple plays to athletic MSU players, and that was the difference in a three point loss.

Was it not a four-point loss?

Everything is showing up as a 69-66 final for Montana State.

Dean Murdoch wrote:Was it not a four-point loss?

Everything is showing up as a 69-66 final for Montana State.

It was 69-66, the video feed "scoreboard" was incorrect...Sjolund's 3-pt attempt was for the tie.