Not to be confused with Memorial Day which honors those men and women who died while on active-duty military service, Veterans Day is meant to honor ALL veterans who have served or are serving.

This morning the University of Portland again began its more than 60-year tradition of posting a 24-hour vigil of Air Force and Army ROTC cadets at the Praying Hands/Broken Wall Memorial that will conclude with a ceremony that will include the playing of “Taps” and an address by guest speaker Maj. Gen. (Ret) Christopher Owens, USMC.  Tomorrow 11/11 at 11…the public is welcome. 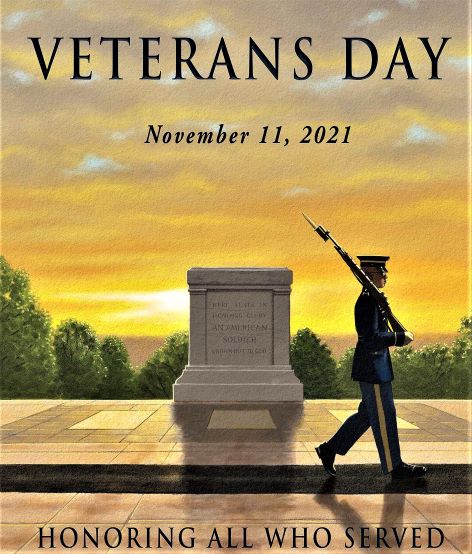 Located at Arlington National Cemetery, the Tomb was initially dedicated by the Army on Armistice Day, November 11, 1921, with the burial of an unknown service member from World War I. Over the past century, additional unknowns have been buried at the Tomb, and the site has become a people’s memorial that inspires reflection on service, valor, sacrifice, and mourning.

Thank you for your service, DD.

up7587 wrote:Thank you for your service, DD.

I will look for many of you at the Praying Hands/Broken Wall today!

Thanks to all who have served!!!

up7587 wrote:Thank you for your service, DD.

I will look for many of you at the Praying Hands/Broken Wall today!

Thanks to all who have served!!!

That was a wonderful ceremony, I am glad I attended.

Again, thanks to all those who served or are serving.

Honestly, there was never a drop of rain during the entire ceremony, but there was probably plenty during the 24-hour vigil.

Veterans Day should be a celebration...Memorial Day is when we honor the fallen.

This video is pure fantasy, but except for all the chit-chat, it is pretty realistic. I consider it a fun salute to the veterans of all our armed services...including those on active duty today.

It is my limited observation that today's high school and university students have very little to no idea of the sacrifices our veterans make and therefore pay no attention to Veterans Day...except as another day off from school.

Having relatives that served as far back as Korea and Vietnam (I was told that less than 20% of all veterans who served on the ground in the skies over Vietnam are still alive today), I have seen what their sacrifice has done to their bodies and minds.

It is my hope that students come out today to the Praying Hands Memorial for the ceremony and the chance to crane their necks to watch the F-15s fly overhead.