USC-related thoughts posted in the preseason thread after the Willamette game:

Not sure what the Pilots will do against a USC team that will very happily start two talented freshman bigs against them. Okongwu (6-9, 245) and Mobley (6-10, 235) were a nightmare against Florida A&M, which for the most part manned up with a four-guard lineup. That appeared to be fairly effective against the rest of the team, but between the two of them Okongwu and Mobley got 37 points, 20 rebounds, and 10 blocks while shooting 70% from the field. Fahrensohn gives up 3-4 inches and 50-60 pounds to both of those guys and the Pilots certainly don't get any bigger when White subs in. I'm sure UP will employ the usual four-guard lineup against most WCC teams, but I'm curious to see how the coaching staff will deal with USC's monster front court (if Hogland remains out, I'm sure we know what the answer is).

SoCal_Pilot wrote:In regards to USC's front court Okongwu is an absolute monster and has one of the more decorated CA high school careers of anyone in the last 5 years, Mobley has more upside but I could see Okongwu giving us more problems with the intensity with which he hits the glass.

Any way to stream without a pac 12 network tv provider?

If anyone is outside the US/Canada (or are tech-savvy enough to make it seem that you are outside of the US/Canada), you can watch it from the Pac-12 international YT stream.

Six-point game at the break but we can safely assume the Pilots will see a little more of "Big O" Okongwu in the second half.

Better performance than I expected. Unfortunately when we had a chance to take a lead at around the 15:00 mark of the second half, Diabate and Tryon missed a series of several point-blank lay-ups. Those two were a combined 3-15 shooting.

This had the feel of a quirky offensive performance for the Pilots, in that I highly doubt we'll see 46% 3-point shooting again. It helped us hang in there for most of the game, but also masked the fact that we were outplayed in the other aspects of the game, especially rebounds (42 to 27). We shot only 35% on 2-pointers.

Nonetheless, this should be a confidence-building performance on the road. Maybe we can get the win on Sunday in San José.

Dean Murdoch wrote:Six-point game at the break but we can safely assume the Pilots will see a little more of "Big O" Okongwu in the second half.

A lot more. So much so he was the top scorer from USC and got a double double despite being in foul trouble the first half.

Half full glass me:
- Wow we actually kept it fairly close against a Pac-12 team for like a good 4/5 of the game.
- I like the grad transfer experiment (well mainly Isaiah White).

Half empty glass me:
- If USC wasn't just as bad on dumb turnovers, we'd probably be blown out. Also missed opportunities to shift the momentum in our favor as usual.
- Why do we always seem to look so bad on rebounds.

Pretty good effort, it's true the high shooting percentage from the perimeter masked some other issues, primarily the rebounding differential.

love to watch them play strong opponents like this, especially on the road. Chase Adams pushing the ball is fun to watch, he's a real find.

Expecting a win in San Jose, at least 2 or 3 conference wins, and some competitive losses. Wonder what Coach Porter was laughing about before the game with one of the assistants?

There was a 2006 grad Pooh Jeter sighting at the game last evening. 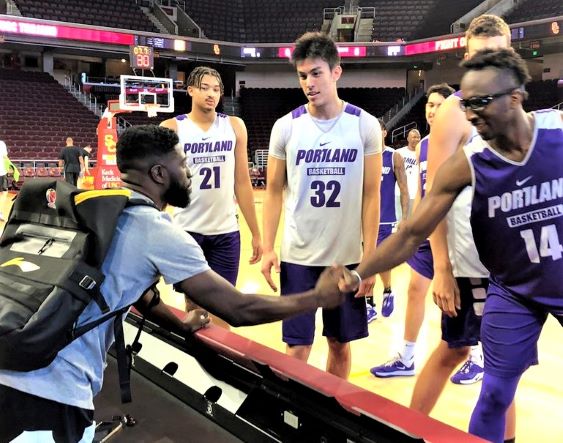 It was pretty obvious the Pilots could stay with the Trojans except for the play in the middle.  Not sure having Akwuba and/or Hogland, or even Pooh Jeter in there would have helped, but it would have been nice to find out...

Okay, this is going to seem like heresy, but IMO TP and his staff out-coached the USC staff.  Loved the quick ball movement and motion, and a couple of variations of a zone defense had USC confused at times.

Now, can the staff and the leadership of Isaiah White keep the team from having a letdown against San Jose St, a team coming off a big upset on the road against Hofstra?

I'm impressed by the early play by the boys and my season outlook has improved because of it. Here are few observations from last night and the first couple games:

1) The guard play has been impressive thus far. It is sooo nice to have a group of guys that can bring the ball down the court and initiate the offense. It makes the offense run so much more smoothly than even last season. Adams, Ferebee, and Jojo are all capable ball handlers and willing passers. I also like that it pushes Porter to more of an off ball role where is a much more functional player.

2) The zone defense they ran last night was surprisingly effective. I think it was used to offset the mismatch USC had with their bigs, but I would hope they mix it in as the season moves along. It is a good fit with the length we have with Fahrensohn, Diabate and Tryon.

3) Fahrensohn looks solid. His length and added muscle make him a handful on both sides of the court. Especially as we get into WCC play, I think the Pilots could pretty easily get away with playing Fahrensohn and White at the 3/4 which will make for some interesting offensive lineups.

4) It is true that the Pilot's 3 point shooting last night covered up some other issues, but it is worth mentioning that USC also shot the ball very well from 3 (10/20).

Overall, I'm encouraged by the way the team has played. The boys should be competitive in most conference games this year. Maybe I'm a little too optimistic, but I could see them going .500 in WCC play if things break the right way. That is a HUGE jump from what I thought of this team just a couple weeks ago.

It will be nice to get Hogland back. I thought last year he was the Pilots' best interior scorer. Tryon and Diabate were really inconsistent last year, and their start to this year makes it look like more of the same from those two.

What's the plan for Akwuba? Is he coming back for the second semester? I see he is still listed on the roster on the website. I assume he is expected to be gone for an extended period, otherwise it would be a shame to have already burned a potential redshirt year for Collinsworth with meaningless minutes against Willamette.

Pooh in the house!! Nice.

I wasn't able to watch last night. Found a stream for Pac 12 Mountain, but not the main network where this game was on. I think I may have to get lessons from Sound Voltex on this VPN business, as I suspect that I am also "region blocked" from listening to Pilots radio on ESPN 910.

I settled for listening to the USC radio broadcast. The guy mentioned a couple of times how well Portland looked on offence. They won't shoot much better from three this year, but hopefully we'll see improvement on that 36% from INSIDE the arc.

Fahrensohn continues to be the surprise of the year for me so far with how much he's been able to contribute.

Going to be a dog fight tomorrow against SJSU. They'll be fired up after that big road win over Hofstra.

NoPoNeighbor wrote:It will be nice to get Hogland back.

What's the plan for Akwuba? Is he coming back for the second semester?

I'm sure Hugh doesn't see a positive to his time away, but he played, played, and played all summer during workouts with the Japanese team leading up to the FIBA World Cup, and I think his body will enjoy the short rest it's getting.

Yes, depending upon how Theo's Computer Science studies go this semester, the plan is for him to return to action in your favorite game of the year, versus Evergreen State!

I've mentioned it before, Theo is a very bright kid, and comes from a very bright family, but he did not learn the best of study habits for an engineering degree back home in Alabama even though he successfully completed the required extra 9 hours of math and science for a computer science degree through his calculus and physics studies.

Fahrensohn continues to be the surprise of the year for me so far with how much he's been able to contribute.

Going to be a dog fight tomorrow against SJSU. They'll be fired up after that big road win over Hofstra.

Pooh is now spending most of his time in LA running his "Laced" business and working with young ballers in the area. Having a wife and child has made him appreciate being home like never before.

Taki is actually a couple of inches taller, and more muscular and quicker than the was when he arrived on The Bluff...and he's a shooter, and like most shooters, he needs to get a rhythm going, something he was never afforded during mop-up time in the past.

It's interesting how the team's leadership is emerging from both ends of the spectrum, grad-student Isaiah White and freshman Chase Adams.  Both seem so calm and experienced on the court, and their self-confidence is rubbing-off on their teammates early in the season.

Yea, San Jose St. is obviously a lot better than the experts suggested, but maybe the Pilots are too...

Even though Bill Walton was NOT part of last night's broadcast, I still muted the sound for the most part, but I did hear the guys mention the "Villanova game" on occasion.

I just looked it up, USC beat Villanova by 11 points in an exhibition game at home three weeks prior to their 11 point win over UP.

Hey, maybe that means nothing, but if you're a UP fan looking for anything positive about the team/program, it has to mean something...

DoubleDipper wrote:IMO TP and his staff out-coached the USC staff.  Loved the quick ball movement and motion, and a couple of variations of a zone defense had USC confused at times.

NoPoNeighbor wrote:Tryon and Diabate were really inconsistent last year, and their start to this year makes it look like more of the same from those two.

Diabate was 2 of 8, most of them at point blank range. Jacob was 0 for 4, mostly on short shots from the key. The rest of the team was 8 of 16 (50%) from 2P range, similar to USC's performance. Four or five more inside baskets would of made it a very interesting game. Allowing 17 offensive rebounds while getting 9 was also damaging.