Three to four years is a long time. Given the hype of the recruiting class, so thoroughly posted here, I do not think it naive to think that sometime in year two we can look for some success with wins, etc.

We have been down so long, it may look like up to some. I sure would like to win earlier than the forecast suggested, particularly before the fourth year.

Other forecasters are more optimistic about Pilot fortunes:

Re: Marcus Shaver Jr. (not yet committed)
Thursday at 6:12 PM
Portland will be in the top half of the WCC next year. Porter is making a huge difference.

From the New Mexico State board:

Re: Marcus Shaver
Wednesday at 12:01 PM
Terry Porter is the coach of Portland. He may be putting something good together. He was one hell of a point guard.

I do not suggest they are accurate, only that hope for winning before the third and fourth year are not entirely dim.

Second-year head coach Terry Porter’s rebuild begins in earnest this season as he brings back just four players from last year’s roster. Of them, only senior guard D’Marques Tyson (8.5 ppg) and junior guard Rashad Jackson (6.4 ppg) accounted for a significant portion of the Pilots’ production. It’s as close to a blank slate as a coach can ask for. And that’s about all that puts Portland above Pacific and Loyola Marymount. We don’t yet know what the Porter Era will be, but this year he can start to show us. That’s more than you can say about the teams below.

Dean, you put it perfectly. I had started to write out a long post a few days ago comparing Porter’s year 1 to Reveno’s year 1. Porter actually did better in my opinion. It just felt like the sky was falling since we finished so poorly. This year, as you pointed out, could be similarly disappointing in the W-L sense, but think we could see some real growth.

My prediction is between 12-15 wins. I had a better breakdown in that post. I can’t remember now why I didn’t hit submit and share it with you all.

Also, thank you, wrv, for the positive vibes. 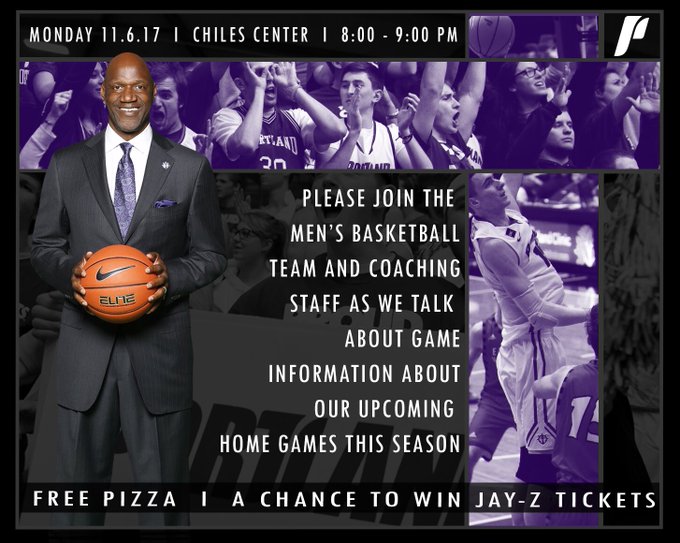 I wasn't going to go, but since I can win Jay Z tickets, maybe I will!

Outlook: Another revolving door in Portland, where there are 11 new faces in a class that got some national buzz, though perhaps for volume. Marcus Shaver Jr., a late pickup after a coaching change at UC Santa Barbara, is a likely standout, with JoJo Walker getting a look at the point. Long Tahirou Diabate grew up in Mali, but became a high school terror in Japan.

10. Portland- The transfers of Gabe Taylor and Jazz Johnson were crushing for Terry Porter’s club. 3-star recruit Marcus Shaver is an interesting piece, but they’ll need a lot of help from their newcomers in order to stay out of the bottom of the conference.

A great way to discourage people from attending an event is to promote it with such vague language and lack of basic details as to ensure that no one will have any clue what the event is, why they would want to attend, or even who it is really meant for:

"Please join the men's basketball team and coaching staff as we talk about game information about our upcoming home games this season."

is this a meeting? A presentation? Is it for all fans? Students only? What is the purpose? The topic is... "game information about our upcoming home games this season." Or, after eliminating the redundant words, "Information about home games." Could this possibly be any more vague? A business professor at UP could use this as a case study of failed marketing.

On second thought, maybe the pizza and concert tickets make the actual content of the event completely irrelevant, in terms of drawing attendance?

I wonder why he used two hands on that one....

Is double dribble still a violation?

So many more highlights and not so high lights of the game.

Free throw and outside shooting need to improve on this team if we are to succeed at the D1 level.

Once again the Pilots showed they are very athletic and were night and day better in the second half compared to the first tonight, but Terry Porter, who was something like an 83% free-throw shooter during his NBA days, must find a way to pass the secret of his success on to his young team.

Good to see everyone play tonight....I was especially impressed with the play of Hogland (whom I think should redshirt) and the walk-on Smith in their short time on the court.

Good to know too that Coach Porter is not quick to hook a player after Jackson missed a tomahawk dunk that flew into the back court resulting in a 3 for or Lewis & Clark....instead he kept him in the game after a timeout giving him the opportunity to throw down the two-handed reverse dunk.

They're a work in progress...and they can only get better!

Nice to see Austin Stone for the first time.

I agree with DD... I was impressed by Hogland and Brian Smith. Hogland made the best single offensive play of any of our interior players. A nice jump hook from the side of the lane.

What about having Hogland play this year, and Smoyer takes a redshirt year to focus on improving his strength and individual skills? Hogland looked like he could contribute more on offense than Smoyer could... But maybe we'll need Smoyer's height and wingspan to eat up some space in the middle when Hartwich needs a breather or gets in foul trouble.

Austin Stone played limited minutes and didn't do much on offense. However, I was very impressed by his communication and obvious understanding of his position within the zone defense.

Both Walker and Shaver looked good, but I still think we'd be better off in the long-run if one of them redshirts this year. Doesn't seem like that's going to happen.

I get the sense that McSwiggan hasn't fully displayed his potential. In the exhibition games he hasn't really gotten into a rhythm. It will be interesting to see how he progresses over the course of the season...

Just wanted to stop the discussion momentarily to say: happy 1000th post, NoPo! Thanks for contributing. I'm sorry that we missed that a few posts ago.

Back to your regularly scheduled Pilot programing.

Per Paul Lukas of UniWatch (the guy who basically critiques all areas of aesthetics in athletics: uniforms and courts):

Paul Lukas wrote:No photos yet, but Portland will be playing at the PK80 Invitational in late November, and all participating teams will have special uniform designs.

NoPoNeighbor wrote: ...is this a meeting? A presentation? Is it for all fans? Students only? What is the purpose? 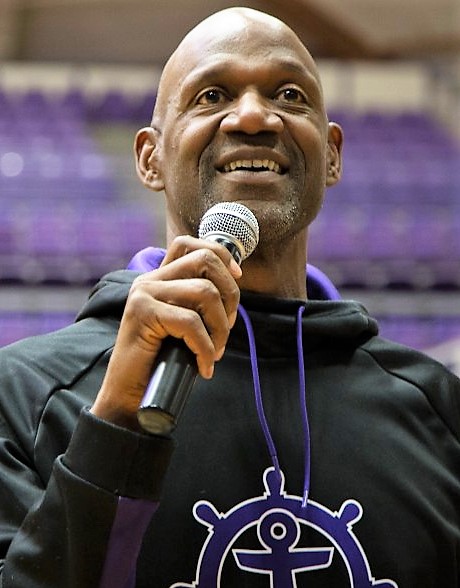 Darn, I forgot to go and win the Jay-Z tickets.

SouthCarolinaPilot wrote:Just wanted to stop the discussion momentarily to say: happy 1000th post, NoPo! Thanks for contributing. I'm sorry that we missed that a few posts ago.

Back to your regularly scheduled Pilot programing.

Thank you, SCP! I really enjoy taking part in the discussion around here. Go Pilots!

Nothing's more exciting than an information session! It's great that 70 students turned out for the event, in spite of the failed messaging/marketing. Will this translate into any actual changes in the student section at games? And if so, will that last beyond the first 2-3 games of the year? Hope so!

Two months after upsetting San Diego in the first round of the West Coast Conference Tournament, Portland’s leading scorer — and onetime Graphic WCC Players to Watch candidate — Jazz Johnson transferred to Nevada. Shortly after his decision, Johnson threw his old team under the bus in an interview with the Reno Gazette-Journal, published May 3:

[Nevada’s program] is a night and day difference,” Johnson said, “Portland has been struggling for the last few years with being successful. [Portland’s] fan base isn’t very high. With Nevada, it’s a community thing. There’s no professional teams. They’re basically the show of the town and the town really supports them. That’s what I love about it.

To be fair, Portland has been struggling with attendance over the past few years. But still: Ouch.

But Portland’s offseason wasn’t all doom-and-gloom. Former UCSB commit Marcus Shaver flipped to Portland, rounding out what could be the Pilots’ best recruiting class in school history. The three-star guard was a late bloomer in the Arizona ranks, and was one of the best high school prospects available in the offseason.

But to lose six players to the transfer market — not to mention three seniors to graduation — in one season? The lack of continuity could be crippling for such a young, inexperienced team. Yet the Pilots weren’t the worst victims of extreme roster turnover; that honor goes to the next team on the power rankings.

Best case scenario: Portland’s young freshmen gel with the junior college transfers, taking the first steps to create a culture of guys who want to pull Portland out of the bottom of the WCC. Marcus Shaver plays like the guy who turned heads in high school, and becomes one of the WCC’s premier young guards.

Worst-case scenario: Portland’s roster of freshmen and transfers struggles to find consistency. The Pilots’ win total is in the single digits, and more players transfer out of the program.

Stat of note: Last season, the Pilots lost 16 straight games in conference play. This ignominious feat hasn’t been achieved since the 2000-01 Saint Mary’s squad lost all 14 of its WCC games — and that was back when the conference had eight members.

Stat of note: Ten players on the current roster have yet to log one minute in a Pilots uniform.

Philipp Hartwich – Portland – 2016/17 Averages – 17.3 Minutes – 1.8 Points – 5.0 Rebounds – 1.6 Blocks – 51% FG – 42% FT
Philipp knows his role for the Portland Pilots, get boards and block shots, he had a block in all but 6 games last leason, getting at least 1 block in his 24 other appearances and grabbed a rebound in 28 of those 30 total games. Rarely does he get bucks, he shot a season high 5 field goals against Walla Walla University (yes that is seriously their name). At 7ft 2″ he shouldnt have any problems to put up similar stats next season.

That was the "annoying overplayed hip party hardy tune" back in my days ("days" as in a few years ago) on the Bluff. Always played at every school dance and probably every now and then during basketball or soccer games (or blared out of someone's dorm room). Was never really a fan of it myself now and then.

Also Terry Porter Show started back up I guess today. First show of the season livestreamed on the FB.

An interesting prediction from ESPN regarding Landale of St. Mary's:

Will definitely be an uphill fight against St. Mary's.

Haha, I almost recognize it too much!

Thunderstruck and other really good "get the adrenaline flowing" recordings were constantly blaring over our squadron loudspeakers when we went out to fly our night strike missions in Iraq in 1990-91....it's old music, but yes, it sure is recognizable.

On Veterans Day, my salute to all those who served.....