I can think of Chier Maker and Adam Quick in Pilots history, but no others...

It does seem like all the Aussies go to SMC, but 6-9/230 Chris Jackson, who hales from Wollongong, NSW, Australia played four years for the Pilots and graduated in 2007.

Chris posts on PN from time-to-time, maybe he can tell us of other Australian players who have played on the men's team...we've had a number of Aussies playing for the women's team, including two this coming season.

That's Chris catching the ball from Darren Cooper while at lunch before passing it to Kevin Field at the same table. If memory serves me correctly, Chris then tosses the ball to Walter Thompson who throws it to Sherrard Watson, who passes it to Rev...2006-2007 was Rev's first year.

BTW, I spoke to Ethan Niedermeyer, Rev's first recruit, a couple of weeks ago, he's now a lawyer with the district attorney's office in San Francisco.

DoubleDipper wrote:It does seem like all the Aussies go to SMC, but 6-9/230 Chris Jackson, who hales from Wollongong, NSW, Australia played four years for the Pilots and graduated in 2007.

I couldn't come up with that name, and that was even during my time at UP! Heck of a memory there, DoubleDipper.

Another Aussie!  Daniel Foster is a 6-6/170 combo guard originally from Perth and now living in Melbourne, Australia.

Foster, like his teammates Triplett and Adebayo, also has an offer from the University of Missouri - Kansas City (UMKC) Kangaroos, and also Hartford, UC Riverside, and Eastern Washington.

DoubleDipper wrote:It's no surprise that Bagley, from Phoenix, has trimmed his list to just Arizona, Cal, and ASU...eliminating at least 10 others schools, including seven majors and Portland.

Mennenga today declared he won't be coming to UP when he graduates in December.

Still on his list, among other schools, are St. Mary's and Washington State.

Prep Hoops wrote:Every spring there’s a number of guys in each state that blow up, Ingraham’s 6-foot-9 power forward Mitchell Saxen is certainly one of Washington’s. Playing with adidas Gauntlet program Team Lavine 16U has greatly improved his visibility. Earlier this month, Saxen received his first D1 offer from Pepperdine. He says Portland is hot on his[…]

Looks like Coach Porter offered Saxen sometime last week, making that his second D1 offer to go along with the earlier one from Pepperdine.

After receiving known offers from Montana, Seattle U, Grand Canyon, UW, WSU, OSU, UP, USD, and PU, the 6-9 center Mitchell Saxen from Seattle has verbally committed to St. Mary's...

@mountsihoops wrote:Congrats to 2020 G Jabe Mullins on receiving an offer from the University of Portland

6-6 G/F from Snoqualmie but lots of competition for him. Oregon State, Colorado State also have recently offered him.

In addition to receiving the offers from OSU, Colorado St. and UP, Mullens, a 6-5 guard from Snoqualmie, also received offers from UCSB, Eastern Washington, Dartmouth, WSU, USD, Stanford, Northeastern, South Dakota, and Montana before deciding to join Saxen at St. Mary's this coming fall.

Zac Triplett, listed as a 6-5/165 SG from Melbourne, Australia, recently received offers from UP, Hartford, Drexel, and the UMKC Kangaroos. 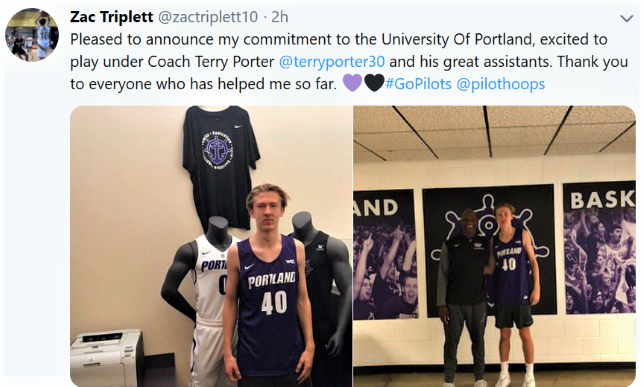 Scouting report: "Triplett is best known for his long-range shooting, and moves well off-ball while possessing consistent shooting mechanics and a quick shot release that makes him a threat without dominating the ball."

With yesterday's commitment by Zac Triplett from Melbourne, and assuming no one defects from the team before next fall, that leaves just one open scholarship for the Class of 2020...could the Pilots sign two Aussies?

Leyi Adebayo, also from Melbourne, and a youth club teammate of Triplett, reportedly made an official visit to The Bluff last week and it would appear he's narrowing his choices to UP, UC Riverside, and USD.

A 6-8 small forward with a good shooting touch, Adebayo would likely be the only listed SF on the roster next season after Isaiah White finishes grad-school. 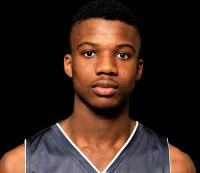 This is the same Elijah Gonzalez who was the 2017 Oregon Basketball Player of the Year and who subsequently signed early with PSU, but opted out when there was a coaching change there, and then had a brief workout with UP, but signed with St. Peter's in New Jersey.

Gonzales spent the 18-19 season redshirting at Western Oregon, but when Coach Shaw left for WSU, Gonzales apparently enrolled at Clarendon College in the Texas Panhandle, but he is not currently listed on their roster.

It's my recollection that Gonzales still holds the all-time scoring record for the OSAA 6-A boys tournament (not single game) with something like 92 points.  I remember him scoring 40 points in the Chiles Center to take Clackamas HS to the semi-final or final in 2017...and most impressive was he hit 20 of 22 free-throw attempts.

Apparently UP once considered him a bit undersized for the WCC, but after seeing Chase Adams play, I think the coaches are realizing a big heart is just as valuable as a big body...

Undersized point guards? As long as they don't think they can drive the lane like they did in high school. We've been there.

up7587 wrote:Undersized point guards?  As long as they don't think they can drive the lane like they did in high school.  We've been there.

Huh? I recall Alec Wintering making a living off of driving the lane as an undersized point guard.

So when would Gonzalez be eligible to join the Pilots' roster? Is this an offer for next season, or might he be able to join the team for the second semester this year? Sounds like he already redshirted last year, so he should be eligible immediately, right?

Kendall Munson wrote:After a good talk with Coach Terry Porter, Blessed to receive another offer from the University of Portland

Kendall Munson is a 6-8/215 PF with known offers from USD, UW, WSU, Mississippi Valley and Montana...

I've lost track of how many recruits UP has lost to Romar at PU, but you can add Kendall Munson to the list...

Mennenga passed on offers from WSU, Cincinnati, and SMC amongst others, and committed to Davidson.

The early signing period begins in less than three weeks and more offers and commitments are being made each day.

With Aussie Zac Triplett apparently committed and set to sign with UP in November, and with only one scholarship remaining (barring someone leaving the team), UP still has a few open offers out there, the newest of which is to 6-4/190 wing Dante Combs at Lincoln Trail Community College in Illinois.

Dante, originally from Indiana, will have two years of eligibility remaining after competing this season at Lincoln Trail.

Not sure if UP is still recruiting point guards, but two that UP previously offered scholarships to have committed elsewhere.

Paris Dawson, who once said it was "important to play for a coach who had been a point guard," has committed to Portland State...not sure what position Coach Peery played at Snow College and Southern Utah in the '90s.

Daniel Foster has committed at Nevada, and as a freshman, will be a rarity at the school that has stocked their roster with transfers and JUCO players...but perhaps new coach Steve Alford will go the more traditional route of a mix of players.

Darius Harding is a 6-5 JUCO wing from Elizabethtown, KY, going to school at Motlow State Community College in Tennessee. He has at least seven other known offers from school much closer to home... 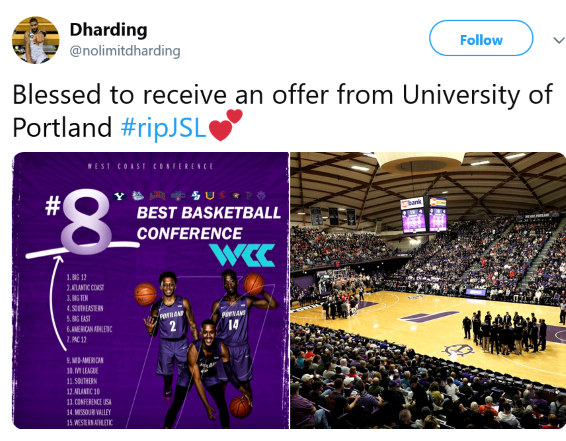 With the offer to LaTrell Jones, it's pretty obvious UP is looking for wings for the 2020 class as Isaiah White, Malcolm Porter and Lavar Harewood will graduate...although Porter will still have one year of eligibility remaining after graduation.

Jones is a 6-5 wing from Louisiana, but goes to school at College of Central Florida...a community college.

Zac Triplett, listed as a 6-5/165 SG from Melbourne, Australia, recently received offers from UP, Hartford,

Triplett verbally committed on October 2nd, and tomorrow, Wednesday, is the beginning of the early signing period, but as it's already tomorrow in Australia, it could be UP will be getting that NLI from Zac Triplett soon...fingers crossed!

Union's opponent was previously unbeaten Evergreen HS, but it was not even close, with Toolson's team winning 99-63 at Evergreen's gym.

Toolson could have done more, but with the score so lop-sided, he scored "only" 33 (9-21) while grabbing 12 rebounds and going 10-10 from the stripe...two of those free-throws coming after he was mugged and left with a bloody nose.

Highlight of the night for many was his two-handed dunk in the first quarter that fired-up his team and the fans.

The only other known D1 offer for Toolson is from Utah Valley, but I expect there will be more.  Toolson is a shooting guard, the same position as recently signed Zac Triplett.

Can't have too many scorers. Thanks for the report.

Any relation to the Toolson currently lighting it up for BYU? He's a transfer from Utah Valley, so I'm curious if there's a connection there.

NoPoNeighbor wrote:Any relation to the Toolson currently lighting it up for BYU? He's a transfer from Utah Valley, so I'm curious if there's a connection there.

Sorry, NPN, I just saw your post from a month ago...

Yes, they are related, cousins.  Seems there are Toolsons everywhere...Tanner himself is one of six siblings.

Tanner's dad, Ryan played at BYU and then 11 years professionally in Europe and with the Utah Jazz, and Tanner is also hoping to go to BYU after his two-year LDS mission that begins this summer.