The games don't actually start until August 5, but it has been all but impossible to read or hear anything positive about the Olympic venue....Rio.

So far the headlines have been all about the corruption that brought the Olympics to Brazil, the displacement of "ordinary citizens" to make room for the Olympic venues that will make the rich people richer and the poor people even more miserable.

Then there's the number of elite athletes that are pulling out of the Olympics due to the threat of the Zika virus along with the additional threat that comes with raw sewage in waters where the sailing and rowing events will be held.

The "Super Bacteria" is apparently something that will make virtually everyone sick to some to degree during the Olympics, but the local police force is also declaring that athletes and fans shouldn't worry about getting sick as much as they should be concerned about getting mugged while visiting Rio.  With the high crime rate and apparent their low pay, police force protesters have been seen at the airport welcoming everyone with signs and banners that read "Welcome to Hell." 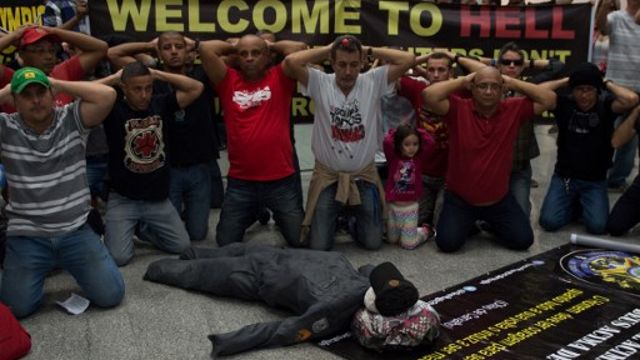 Not sure what's being done to combat the health issues, but in order to combat the expected rampant crime wave, Rio is bringing in around 85,000 rifle carrying soldiers and armored cars in an attempt to keep the games safe.  Armed troops at the Olympics may not be a precedent, but it does implicitly indicate that something is horribly amiss in Rio, and the 10,000 world-class athletes and 500,000 spectators should use caution inside and outside the Olympic venues.

Fingers crossed that events leading up to and during the Olympic Games in Rio will be, for the most part, positive.

Is that as bad as body parts washing up on the beach?

Russian athletes must be quietly relieved that they are banned.

A couple of premier events in the US trials take place today....the men's and women's 1500m....and there's still a chance a UP student can make it to Rio if Alexa Efraimson can finish in the women's top 3.

Jenny Simpson and Shannon Rowbury, two of the most accomplished American runners in the history of the event, looked as if they were on cruise control through the opening rounds and produced the two fastest times in Saturday’s semifinals, with Simpson finishing in 4:10.09 and Rowbury in 4:10.24. But Efraimson, a 19 year-old professional from Camas, who just finished her freshman year at UP, has a chance.

During Thursday's first round she recovered from a crash and fall to finish in 4:14.40 and advance on time.  In the semifinals, she hung in with Simpson and Rowbury, the American record-holder, to finish third in 4:10.49.

Ultimately, her lack of experience may hurt her this year in a field crowded with experienced and fast runners, but even if she doesn't make it to Rio, she should have a wonderful future ahead of her.

Current UP frosh Efraimson 6th, former UP frosh Cain 11th. Happy to see Martinez qualify as she got tripped and fell in the last turn of the 800m final.

pilotram wrote:Current UP frosh Efraimson 6th, former UP frosh Cain 11th. Happy to see Martinez qualify as she got tripped and fell in the last turn of the 800m final.

I too am happy to see Martinez qualify...heart breaking to see her go down in the 800m. Today she took another dive, but this time it was to cross the finish line in 3rd. 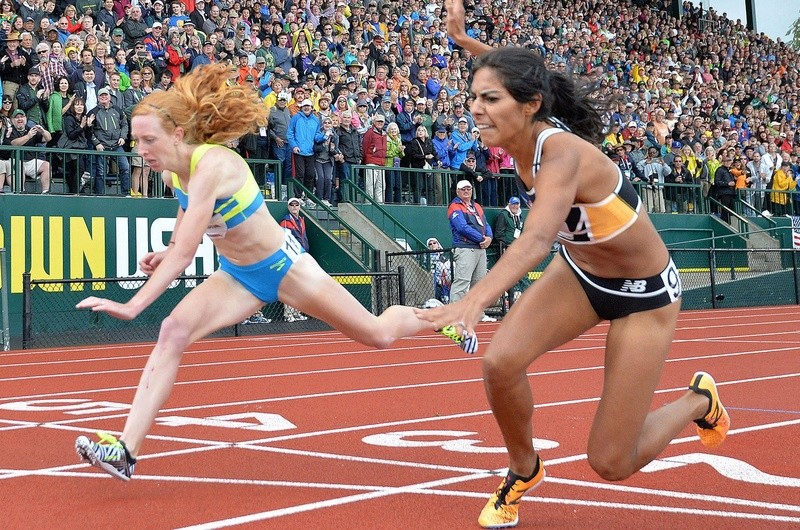 Excellent finish for Efraimson, but quite a disappointment for Cain, who in 2013 ran times that would have won today's final. Efraimson is only 19 and Cain 20, so they've got time to get better.

I expect to see Alexa Efraimson in the Tokyo Olympics in 2020!

DoubleDipper wrote:I expect to see Alexa Efraimson in the Tokyo Olympics in 2020!

But before then she's got a lot of running to do.  This Friday she departs for Bydgoszcz, Poland for the U-20 World Championships.

"I'm really excited for it, I think it's going to be good," said Alexa.  "No American has ever medaled in the 1500 at that race before, so I want to be the first." 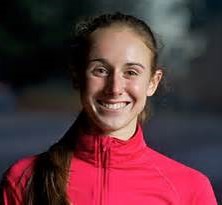 Alexa giving Bmart an elbow at the 2:59 mark of the trials. I hope she doesn't use these same manners at the Commons.
https://www.youtube.com/watch?v=mIopimKySjY

Hey, they were once down by 8 in the first half....but yeah, the Americans can no longer take winning for granted.

Good game from the women today....third straight game over 100, but Serbia gave them a good battle.

Man, Matthew Dellavedova is sure a pain in the butt.  Exactly the kind of guy you want on your team....frustrating as heck if you're his opponent.

Gritty win for the USA with Australia shooting 50%....Patty Mills getting 30.