Good to see the new era under Coach Carlin-Voight starts with 4 straight home games to give the newcomers a chance to jell with all their teammates at Merlo Field in front of their excited new classmates....UP classes begin on August 22nd this year.

Interesting....the men's season opener on August 26th against Wright St. is a double header with the UP women playing PSU, but this year the men are getting the prime time starting time of 7:30 after the women play at 5:00.

First chance for fans to see the "new" men's team in competition is this coming Saturday night at 7 at Merlo Field.

They men will be playing Corban University from Salem.

If unlimited substitutions are allowed during this exhibition game, the Pilots could be in trouble.....Corban shows 42 players on its roster, including 5 goal keepers.

Can they play all the keepers at once?

Had the distinct pleasure of sitting with Geezer and Mrs. Geezer on a beautiful evening at Merlo Field last Saturday as the Pilots took on Corban University.

Excellent turnout of fans from both schools for a "friendly" where no score was kept, but still a good chance to see Nick's new team in action.  One problem though, if you were trying to identify the UP players by using the roster on the UP website, you were out of luck because the UP players swapped jerseys before the game and then did it again at halftime.....never wearing the number assigned to them on the official roster.  Whether this was done to fool the opponent or the fans was never explained....but I'm guessing Coach Carlin-Voigt knew what he was doing.

It was pretty obvious the Pilots had only 5 days of official practice before the game, but there were still some excellent team and individual plays to go along with a couple of really bone-headed plays be the Pilots.

(No score was kept, but I counted 7 goals by the Pilots and 1 gift goal by Corban).

The new regime got off to a rocky start against a very good Wright State squad, dropping a 3-1 decision.

UP's goal came on a Jackson Jella PK conversion after Eddie Sanchez got taken down in the box.

Lots of speed and promise from this team. Also lots of mistakes.

Geezaldinho wrote:Lots of speed and promise from this team. Also lots of mistakes.

It's definitely a faster and more athletic UP squad than we've seen for quite awhile...they should be fun to watch....especially as they gain experience.

Congrats to coach Carlin-Voight for his first D1 win on the bluff, a hard fought slugfest against DePaul.

The blue Demons  lived up to their billing and the ref let the game get away, missing several yellows right in front of him.

The third foul he gave to the wrong fellow instead of sending off a player. No matter. The player who was mistakenly given the yellow got his second one a few minutes later. DePaul finished the match a man down.


Both  UP goals were by Jackson Jella, who now has three for the season. He added spark as soon as he came in.

Still some sloppy play by Pilots, and they need to learn not to retaliate, but the result was better this time.

More like rugby than soccer on occasion this evening, but UP was able to withstand the physical play of the Chicago boys with speed and skill.

Have to think the ref just didn't know how to handle a game like this....and there was absolutely no communication between the linesmen and the ref.

Nice to get the first win of the Coach Nick Era,  but the guys deserved better from the officials.

Just watched the highlights and this is all I could focus on: do they have names on the kits now?

In all seriousness, I am very excited to watch what will happen to this men's soccer team.

Hey PN - this men's soccer team is for real.  Another great win today with some of the most exciting soccer to be played on the Bluff in years. They are fun to watch and are playing excellent team soccer. Speed at several positions is the key and the Pilots are dangerous whenever they get in their offensive 3rd. The team is on the road for the next 3 weeks so plan to come on out to Merlo Field for the next home match on September 25th. You won't be disappointed! GO PILOTS!

"We lost a little discipline on the set piece," said Spartans head coach Simon Tobin, where Dunn ran inside the six-yard box untouched to head the ball cleanly past Spartans goalkeeper, Nedin Tucakovic.

Edwardson's goal had nothing to do with lack of discipline.

The Men came from behind 0-2 against Evansville to get a draw on Friday.

Eddie Sanchez got the first goal back and in the top 10 plays of the day with this highlight reel number.

Edwardson  converted a PK late to tie it up.

@PortlandPilots wrote:MSOC: Final from Evansville as the Pilots defeat Bradley, 3-0, to claim the Purple Aces Soccer Classic title and improve to 4-1-1. #GoPilots

@PortlandPilots wrote:MSOC: Final from Evansville as the Pilots defeat Bradley, 3-0, to claim the Purple Aces Soccer Classic title and improve to 4-1-1. #GoPilots

Evansville, Indiana is ridiculously difficult to get to from Portland, (rumor is Coach Carlin-Vogt attempted to get out of the games that were scheduled by the previous coach) and the travel really cuts in to the student-athlete's class time, so it was a good reward to win the title.

As one would expect from a top-notch program, the Aces' field is also top-notch, I'm told....and it seats 2500, all one side of the pitch. 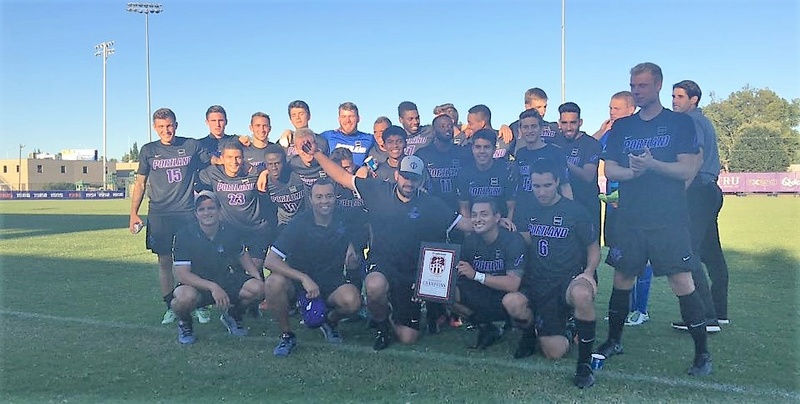 And the guys have cracked the "Also receiving votes" section of the NSCAA Poll. Great progress so far, really well deserved!

In the latest NCAA RPI the men are 79th. Anyone want to wager their chances of moving up to the Top 64(?).

Well, according to this website, Portland is now #64 with their win last night to move them to 8-3-1.  It was a comfortable lead until they allowed two very late goals, but great job Pilots!  Four wins in a row and counting . . .

I continue to be impressed with the turnaround of this men's team. Consider this, all of these conferences games have been on the ROAD so far. Keep it up and big schools will come knocking on Carlin-Voigt's door.

Paul Christiansen was named this week's WCC POW based on his two shutouts.

Villa is trying to raise money to follow men's soccer on the road and give them support at the Pacific game this week. There is a GoFundMe set-up right now. Unfortunately, I can not post a link.
I know the team would love the support and having Villa at the game could help them out mentally for this tough road trip (play at No.6 Denver then traveling to play Pacific)

SoccerPilot wrote:Villa is trying to raise money to follow men's soccer on the road and give them support at the Pacific game this week. There is a GoFundMe set-up right now. Unfortunately, I can not post a link.
I know the team would love the support and having Villa at the game could help them out mentally for this tough road trip (play at No.6 Denver then traveling to play Pacific)