up7587 wrote: One concern I have is that I doubt Terry Porter's name will be as strong as he thinks it will.  His playing days were a long time ago in the life of 18 year olds looking at scholarship offers.  A radio host made the point that Damon Stoudamire will have a much higher name recognition to a player in No. Portland than TP.  He'll have to work as hard as Rev to get interest from recruits.

I had this thought at first, but we've got to figure that the types of recruits who would succeed at UP academically would have both the ability and inclination to google who's calling them.  And the recruits would find someone who went from an unrecruited NAIA kid to two-time NBA All-Star.  That's gotta count for something.

Also, I hadn't seen this posted yet, but I first learned of the Porter hire on Friday while at the baseball game.  In between innings the PA announcer gave a quick little welcome statement and then followed it up with nothing other than a riff off of the "Bust a Bucket" tape from the early 90s!  Straight dope.

Romar at Washington, Reggie Theus maybe, Alford at UCLA and the Utah coach, Krystowiak or something like that, are examples of former NBA players who have done well coaching the college game in the west region alone. There are others.


The point I was trying to make regarding ex-NBA players as college head coaches was that it's more about their lack of success if they don't have prior college experience as an assistant.  The one exception of the four you listed is Alford, who started his collegiate coaching career as a head coach at DIV 3 Manchester, and was successful from the start.  That's the exception, not the norm or even the vast majority of cases.  Romar spent four years as an assistant at UCLA before accepting his first college head coaching job at Pepperdine.  Theus spent two years as an assistant to Rick Pitino at Louisville in the old Big East conference, which is probably worth about four years elsewhere.  Krystkowiak spent two years as an assistant at Montana, the one year as an assistant at Old Dominion, before returning to Montana as head coach.  Being an NBA assistant doesn't necessarily translate to college head coaching success, without experience in college as an assistant.  I'm just saying that it's the rare exception, when anyone walks into a college head coaching job and succeeds without having experience as a college assistant.  I hope that TP proves to be an exception.  Nothing's impossible, but as we've seen, UP is a tough, tough place to be successful at men's college basketball - for whatever reason(s) - and no one has done it since Jack Avina, and he left 40 years ago. I do like the fact that Coach Porter's mentor was Dick Bennett, and it was at a school even smaller than UP. Wisconsin Stevens-Point. At least he has Coach Bennett to be a sounding board for years to come (hopefully many years, Bennett is now 72).

VillaGorilla wrote:Also, I hadn't seen this posted yet, but I first learned of the Porter hire on Friday while at the baseball game.  In between innings the PA announcer gave a quick little welcome statement and then followed it up with nothing other than a riff off of the "Bust a Bucket" tape from the early 90s!  Straight dope.

Check out the Oklahoma City Thunder players....they just had to watch.

up7587 wrote:One, I am glad us outsiders don't know the details of the hiring process.  I think it is valuable that the AD office and admin can keep lips zipped.  Then you can talk to candidates or their reps that would never talk to you if their name was to come out speculatively.

This is a great point. However, I'd sure love to know who the other two finalists were for the job (at today's press conference, Leykam said that Porter was one of three finalists). I've got to assume that if someone was a "finalist," he definitely wanted the job. Was Dave Rice one of them?

From what I heard, and this is from someone who is very well connected, it was Porter's job from the get go if he wanted it. Whoever the other two "finalists" were, well, they were there only there in case they couldn't come to terms with TP.

Purple is a good look on TP....now we need Kramer to get Coach Burns fixed up too. 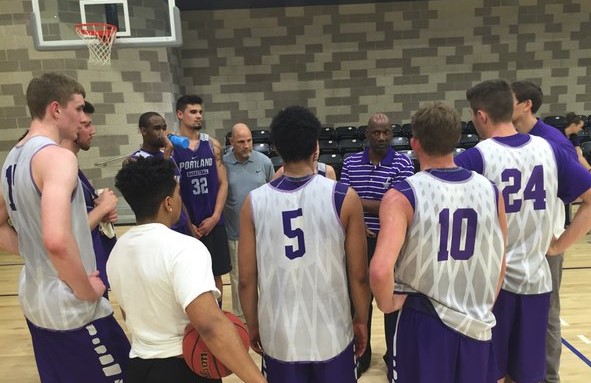 Any buzz on who are candidates for the 2nd assistant position?

PilotNut wrote:It seems to me that it is notable that Kramer is in this photo...  Is that confirmation that he will be retained, at least for the time being?

For now Kramer will continue his duties as the DOBO, but his future in that position is uncertain.....

I pressed TP on the importance of keeping Kramer, but it seemed he may have a few others he'd like to discuss the DOBO position with.  Each DOBO seems to bring unique talents to the position, but Kramer was Rev's "Radar O'Reilly," he has a good relationship with the players, and has a uniquely positive working relationship with everyone in the athletic department.

It's my guess TP will retain Kramer, but if he does not, Kramer will either find another position within the athletic department or go to another school to continue his coaching development.....maybe even the school where Rev eventually ends up.