The Pilots have five more games before the WCC Tournament……four of those games are against the top three teams in the league: Gonzaga, BYU (2), and St. Mary’s; one or two wins against those teams could catapult the Pilots into 5th place which should have positive ramifications as the tournament progresses.

It would not appear any of those games are considered “must wins,” but the game Thursday night at 7 against USF will go a long ways toward avoiding the Wednesday game in Las Vegas and keeping the hope for 5th place alive.

USF beat the Pilots in a high scoring affair in San Francisco 88-81 just a month ago after the Pilots trailed by 23 points in the second half. I do not see that happening this time as the Pilots will likely clamp down on the Dons offense. After their loss to the Dons the Pilots were 0-3 in WCC play, but since then they’ve gone 5-3 as the coaches find the right on-court combinations, and the women start playing as a TEAM.

The St. Mary’s game at 7 o’clock on Saturday will present some real match-up problems for the Pilots, but if the Pilots can avoid digging themselves into a early hole…..they were down by 15 in the second half before rallying to within one in their loss at St. Mary’s last week…..they should be able to give the Gaels a good game.

The Pilots players are a fun group of ladies to watch…..come out and support them; I don’t think you’ll be disappointed.

From the Pilots Athletic Department:

PORTLAND, Ore. --- The Portland Pilots are asking you to join the global, unified effort to raise breast cancer awareness and funding at its annual “Play 4Kay” game, which is set for Saturday night against Saint Mary’s at the Chiles Center. Fans are encouraged to join the Pilots and Gaels in wearing pink to the game.

All fans wearing pink will receive free entry into the game, which is set to tip-off at 7 p.m. Pink wrist bracelets, as well as other information and hand-outs, will be available to fans as they enter the Chiles Center.

The University of Portland has partnered with Providence Cancer Center for the Play4Kay promotion. Dr. Ali Colin, a Providence oncologist, will welcome Pilot fans to this special event.

The Kay Yow Cancer Fund is a charitable organization committed to being a part of finding an answer in the fight against women's cancers through raising money for scientific research, assisting the underserved and unifying people for a common cause.

The Play4Kay games, formerly known as “Think Pink” and “The PinkZone”, are in honor of former North Carolina State women's basketball coach who battled breast cancer three times in her life and passed away in 2009. Since its inception in 2007, the Play 4Kay initiative has raised over $2 million to support women's cancer research.

The 2013 Play 4Kay initiative, February 8-18, is an opportunity for a nation of coaches to raise breast cancer awareness and funds for scientific research on the court, across campuses, in communities and beyond.

I know one guy who will be at the game on Saturday: 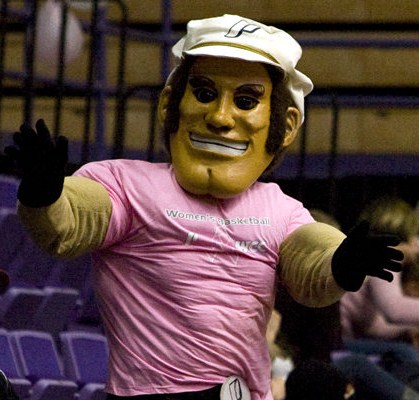 Amy Pupa got 21 and 11 but they shot 37% as a team, and most of their misses were just terrible. They really could have had this one and missed an opportunity.

Mrs. DD took me to the game for Valentine's Day....with chocolates and everything, but the loss to USF was disappointing.

USF has two really good players, a freshman and a senior, and except for Amy, the Pilots just didn't have any answers....especially on defense. It was nothing but ole´ until the last 3 minutes when they started pressing and trapping……and it worked.

Come on coach, do some coaching…..sooner!! Very conscious of watching what the coaches are doing and what substitutions they are making lately, it was disappointing to see the USF staff coaching virtually every second while the UP coaches seemed to just wring their hands while USF continued to score.

Oh, I forgot to mention, the Pilots were down by 11 with about 3 minutes left in the game when they finally started to play defense.....and then they had an open 10 footer with 10 seconds left....clank!

Disappointing, but again, why wait until 3 minutes in the game to play defense?

Haha, nope. We were sitting with Kari's dad and Amy's dad.....I figured they knew much more about the game and refereeing than I did.....and they were cool, so I too was cool.

Encouraged by the hustle and energy displayed by the young Pilots, but they've still got a lot of developing to do between now and tournament time.