Despite his claim that he would remain a Duck, ESPN is reporting this morning that the Chipster will head up the Eagles. Apparently roster control was the issue.

@SportsCenter: BREAKING - Sources: Oregon coach Chip Kelly will be the new coach of the Philadelphia Eagles (via @mortreport)

Press release from the Iggles.

Oregon thought it had a year before it had to worry again about Chip and whether a NFL team would lure him away. It turns out, the Ducks were blindsided 10 days after he said he was staying in Eugene.

Really it was just a matter of timing for Chip’s departure, but his about-face will probably go down in sports lore alongside Nick Saban's infamous "I'm not going to be the Alabama coach" just before leaving to take that job.

No matter what reason Kelly chose for leaving….money, control, or power, (or maybe he simply had a change of heart) his credibility will be a major question going forward considering how he told Oregon one thing and then did the other.

But really, after all Chip has given UO fans, I don’t think anyone should begrudge him the opportunity to move on to new challenges and the riches that can go with it. He’s apparently left the program in good shape (except for one nagging NCAA investigation), and that’s a lot more than happens at many universities.

I look forward to watching his style of offense fail at the professional level.

I don't think Chip had a Saban moment. He's never said he was staying at Oregon forever. He's clearly always wanted to coach in the NFL. I think it came down to the Eagles making the necessary concessions to get Chip, which apparently they weren't willing to do when they first interviewed him.

The Oregon program has never been in better shape, but Chip is going to be hard to replace. Maybe the new coach can recruit a kicker!

I'm not upset with Chip at all and am actually suprised anyone would compare him to Saban. Chip was going to leave eventually but the Ducks aren't going to be lost without him. When I heard the news I actually wasn't that shocked.

pilotram wrote:I look forward to watching his style of offense fail at the professional level. 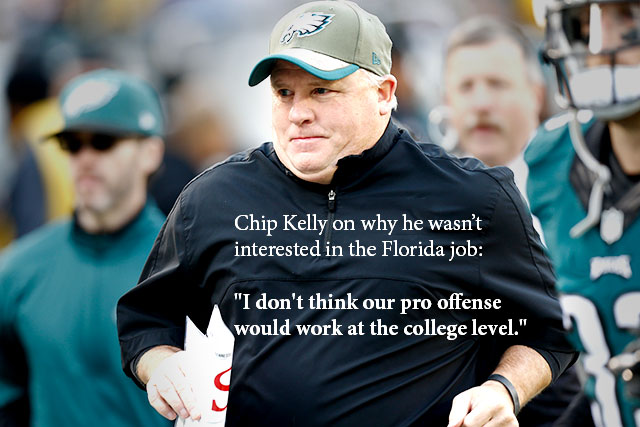 If you're not following, Chip is currently tied for best record in the NFL, with a big game against the Seahawks this weekend.

Yep. Proved me wrong. And with Sanchez of all people!

Really not a surprise that Chip Kelly was fired by the Eagles.....there were just too many personnel decisions that back-fired and too much dissension in the ranks that led to losses this season.

Any speculation here as to Chip's next perch?

Lots of NFL jobs open or soon to be open.  I think he'll stay in the pros.

Wasn't there some sort of penalty he would have to serve if he returned to the NCAA?

The Titans would be a good fit in that they have the perfect quarterback for his system. The problem is that otherwise, they are terrible.

pilotram wrote:Wasn't there some sort of penalty he would have to serve if he returned to the NCAA?

His show cause was only 18 months, so he's in the clear now.

I don't think Chip can coach in the NFL right now. He won't take a job unless it includes being the GM and his experience as GM has shown he has no basis for a team to give him the GM position. I imagine he could get any job in college that is available and will likely end up at one.

There are other reports that he doesn't want the personnel responsibilities in his next position.  I think at Philly the atmosphere was poisoned, what with player accusations of racism, etc. And my speculation is that the GM he pushed out of the way spent the year trying to undermine him internally; that guy is on the search committee for a new coach by the way. Giving up personnel power in Philly would have been a sign of obvious weakness, and the players would have taken more advantage of that.

Those issues all go away with a new team and a fresh start.

up7587 wrote:Those issues all go away with a new team and a fresh start.

Yea, I have to agree with you there.

If Coach Kelly hasn't learned his lesson about wearing too many hats in the NFL by now, he's never going to learn.  Be the coach, period!!

Al Davis wore multiple hats while bringing the Raiders to prominence, but it soon became apparent he could be a coach or an administrator....he chose the latter and the team flourished (for awhile).

I honestly don't see Kelly going back to college coaching.  With the right fit of personnel and management, I think he can be a successful NFL coach....and he'll get the chance to prove it this coming season.

Local philly news has him going to the Titans.

It's down to Mike Shanahan or Chip Kelly to the 49ers....

Between those two, it's got to be Chip Kelly to San Francisco!

With the Miami and Cleveland jobs filled, it had to be the 49ers!

As Trent Baalke is remaining as the GM at SF, it would seem that Chip can make suggestions to the front office, but his duties are on the field!!

If Chip can continue to go with his unique style of offense it could be that Colin Kaepernick will come back at quarterback (most figured he'd be traded prior to the draft)....and he's got a lot of athletic guys at the skill positions.

Florida spurned again as Chip heads to UCLA for a reported $23 million over five years.

He should be a great fit for UCLA and IMO it's also great to have him back in college football and the Pac-12....Beat USC!!

On another note, Mike Riley is apparently out at Nebraska.  I think it was more of a surprise when he was hired than when he was fired.

Nebraska was 4-8 this year and is not bowl eligible with Riley's own recruits, and although he was lobbying to continue at Nebraska (his contract ran through the 2020 season) his $6.6 million buyout will cushion his fall....and next year he'll be eligible for Medicare!

I wonder if Mike will head back to Corvallis...

Geezaldinho wrote:I wonder if Mike will head back to Corvallis...

I guess anything is possible....but considering Riley's age and the salary he'll get for NOT coaching, I doubt it.

Kind of strange that the OSU AD said the assistants would be "working from home," but then finally clarified the coaches had been fired and were told to clear out their offices at the football center by tomorrow night.

But on the positive side, they were all signed to contract extensions last summer that keeps them paid through the 2018 season.

I really haven't followed OSU football since Terry Baker graduated, but I recall they won a bunch of bowl games in the mid-2000s, including a couple over Notre Dame, so football at OSU can be pretty good.

(For those of you too young to know Terry Baker, he graduated from Jefferson High in Portland, won the Heisman at OSU in his senior year in the Fall of 1962, and then in the following March he led the OSU basketball team to the 1963 NCAA Tournament and played in the Final Four.

DoubleDipper wrote:I really haven't followed OSU football since Terry Baker graduated, but I recall they won a bunch of bowl games in the mid-2000s, including a couple over Notre Dame, so football at OSU can be pretty good.

So who do the Beavers hire as their next head coach? Jonathon Smith, the walk-on QB who led OSU to an 11-1 season in 2000 and defeated Notre Dame in the Fiesta Bowl when OSU was coached by Dennis Ericson.

I saw a report that Ericson was lobbying OSU officials to take him back as head coach, and that he would in-turn bring in Smith as his offensive coordinator with a head coach-in-waiting designation.

Apparently OSU was so impressed with Erickson's idea they just cut out the middle-man and named Smith head coach!