Hmm, it would appear they're just trading numbers, to me...... 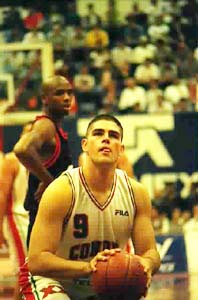 True. Not just anyone can drive to the Commons for dinner.

And breakfast. And lunch.

Was recently asked how Gerun is immediately eligible at UP. Answer?

Waiver based on precedent submitted by UP granted by NCAA that student-athlete denied opportunity at WVU. Ask @PilotCompliance

In response to UP Men's Basketball post on Facebook about Training Camp for the Spain trip, Gat Bol writes: "Will you guys have open gym for walk-ons?"

Note the 'cover photo' image on his Facebook page:
https://www.facebook.com/gatluakbol

In response to UP Men's Basketball post on Facebook about Training Camp for the Spain trip, Gat Bol writes: "Will you guys have open gym for walk-ons?"

Note the 'cover photo' image on his Facebook page:
https://www.facebook.com/gatluakbol

Well, based on his comments, e.g. be sore or be sorry, he should be a Rev favorite. Good find.

Mr. Bol possesses a pretty nice soft touch….from what we see in a highlight reels, but he's definitely lacking in size/speed at this point in his development.

He could be a “D” on the A-F scale, but from the little I’ve seen, he’s got a long way to go to become a Division1 player……

If Mr. Bol walks-on at UP, I obviously hope he eventually becomes an “A.”

Where does "WCC impact player" fit on the A-F scale?

At the very least, it helps the entire team to have another hungry, motivated teammate to push them at practice. And 14 is a nice round number. 7-on-7 scrimmages gives the coaches a chance to experiment with different line-ups and substitutions.

Coach Reveno wrote:Evaluating walk-ons is always interesting. Do you want to contribute to team's mission or just a place to pursue your dream? Think about it

In response to UP Men's Basketball post on Facebook about Training Camp for the Spain trip, Gat Bol writes: "Will you guys have open gym for walk-onsNote the 'cover photo' image on his Facebook page:
https://www.facebook.com/gatluakbol 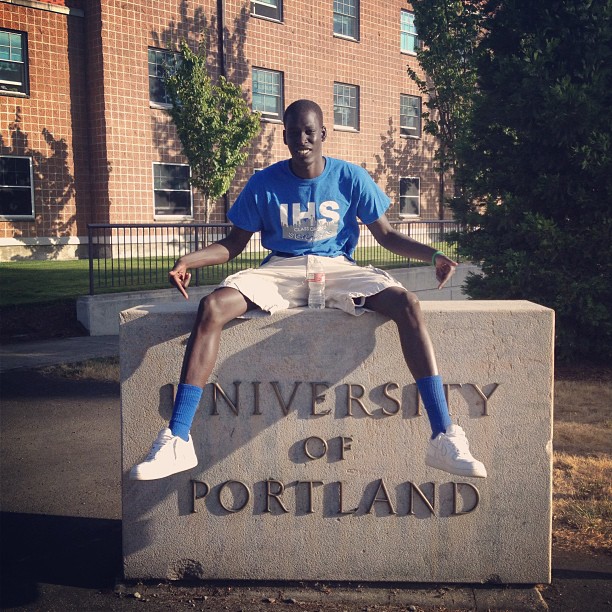 From Mr. Bol: "Loving this place!"

Does the team have an open try-out for walk-ons at some point? What's the process for Bol, or other potential walk-ons, to get involved with the team and the condition/strength coaches? Or even at an informal level of work-outs, scrimmages, etc?

There's no mention anywhere or from anyone that Gat Bol will be joining these guys on the court: 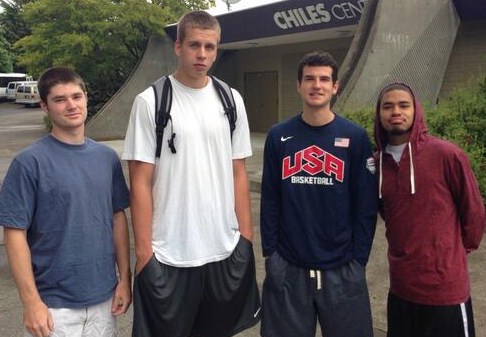 I don't know the answer to your question NPN, but I'm confident that Gat and Rev, or one of his assistants, has had a chat. In the past we've rarely known of walk-ons until the roster was "officially" announced....the whole process and announcement of David Ahern last year was the exception.

The "official" roster is now posted on the UP Athletics website....

1) John Bailey went from being a R-So. to a Sr. (no surprise).
2) There are no walk-ons listed (yet).
3) There is no acknowledgement that Voldy went to WVU or that Bobby attended Santa Rosa JC (strange).

They just have "previous school" set to "high school" - some switch will be flipped at some point, I'm sure. No shenanigans in play here.

DeanMurdoch wrote:They just have "previous school" set to "high school" - some switch will be flipped at some point, I'm sure. No shenanigans in play here.

Ha-ha, and just like that, the switch was flipped and WVU and SRJC are now on the board......

I don't think I've seen the word shenanigans on this board before.....sounds more Irish than Canadian.

Things can get dangerous when you have a Gat.

Hmm.....Duke coach Mike Krzyzewski doesn't think Voldy should be able to play at UP this season:

ESPN.com wrote:Duke coach Mike Krzyzewski has a simple way to stop the confusion regarding transfer waivers in college basketball: stop allowing them.

"There should be no exceptions," Krzyzewski told ESPN.com. "Everybody should have to sit out, that includes a fifth-year player, just to make it equal. I think it's a farce, really."

The NCAA has come under scrutiny after a number of recent transfer decisions, and the reason, Krzyzewski believes, is a lack of consistency.

Although he'd prefer to see the entire process eliminated, he said, at worst, the NCAA should take an all-or-nothing approach.

Well, Mike does live in a plantation state...

How about a rule where a coach who's program  commits a major violation gets a ban from coaching for a year?

And considering Mike's support of Joe Paterno, i'm wondering if his meter for what is or isn't ridiculous needs calibrating.

Although it's been a number of years since I lived in ACC and SEC country, and things may have tightened-up a bit since then, during my time in North and South Carolina and Florida, fans and coaches alike never seemed to care about the rules.....and were often open about flouting them.

The coach K scandal was only a year or two ago. his defense of Paterno is about as old.

and the Plantation concept comes not from some fringe nut, but from Walter Byers, the Czar of the NCAA from 1951 to 1988 who created the empire including the concept of the "student Athlete" which was an artifice to avoid paying workmans comp claims from players paralized playing football.

He also jump started the supremacy of the NCAA Basketball tournament when he took it from 8 to 16 teams in the early '50's. ( folks our age will recall the NIT was the big tournament when we were young)  It is now the main income earner for the NCAA.

“Today the NCAA Presidents Commission is preoccupied with tightening a few loose bolts in a worn machine, firmly committed to the neo-plantation belief that the enormous proceeds from college games belong to the overseers (administrators) and supervisors (coaches). The plantation workers performing in the arena may only receive those benefits authorized by the overseers.” - See more at: http://josephsoninstitute.org/sports/pvwh-sportsmanship/2010/08/pay-for-play/#sthash.P62k7EAT.dpuf

NoPoNeighbor wrote:Does the team have an open try-out for walk-ons at some point? What's the process for Bol, or other potential walk-ons, to get involved with the team and the condition/strength coaches? Or even at an informal level of work-outs, scrimmages, etc?

There is no formal open try-out, but there's always the opportunity for a kid to workout with the coaching staff to have his potential evaluated.

Mr. Bol was in the gym recently.....and he's certainly a great young man and has some basketball skill.....but he's not a D-1 player; just too lightweight and lacking in strength and quickness.

Sometimes a young man like Mr. Bol can latch on as a student manager and, in addition to his normal duties, can be a "practice" player with the team.....gaining experience and utilize the training room facilities on a time-permitting basis.

Josh Horton at West Coast Convo has written a piece about Voldy:

Meet the Newbies: Volodymyr Gerun
Gerun did not produce a ton at the high Division I level, but his skill set is undeniable. He moves well without the ball and can finish through contact, which every big man is expected to do. Although Gerun will likely come off of the bench this season behind All-Conference Honorable Mention forward Nicholas, he will contribute a ton and could end up averaging over 20 minutes per game for Eric Reveno’s squad.

http://westcoastconvo.com/2013/10/02/portland-pilots-forward-volodymyr-gerun/
Not sure why the article used a picture of Coach Reveno instead of Voldy....maybe it's thought that's what Voldy will look like in 20 years..

Does the T-Room still provide free beer on a patrons 21st birthday? 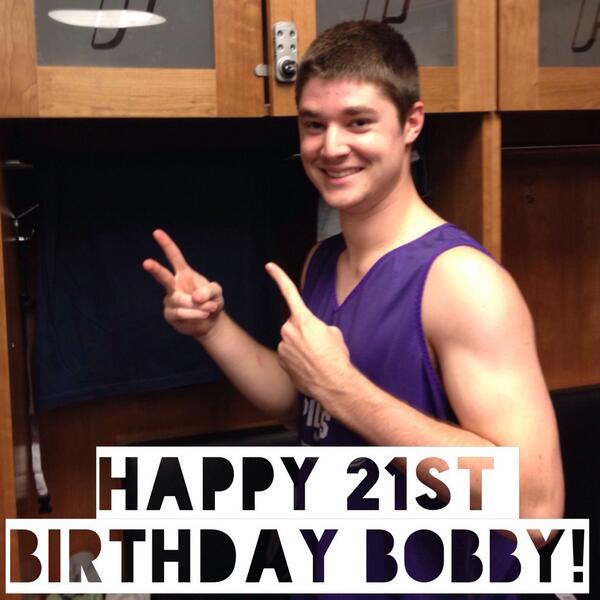 I thought he was looking kind of OLD at practice today....

This article, and others have called Bobby a PG.....but I don't expect he'll play PG at UP.  Alec is the starter, and assuming he gets back to full speed, DC will be his backup.  The third PG, as I see it, is Bryce.  Xubi may one day play PG, but not this year unless there are injuries, IMO.

Bryce, DC, and Bobby will certainly rotate through a SG position with Tanner and Korey....and at some point Xubi, but I just don't see Bobby playing the traditional PG role.

NoPoNeighbor wrote:Does the team have an open try-out for walk-ons at some point? What's the process for Bol, or other potential walk-ons, to get involved with the team and the condition/strength coaches? Or even at an informal level of work-outs, scrimmages, etc?

Well, as you can see from the picture, Gat Bol and four others are now the student managers of the UP Men's Basketball team.....

Big shout out & thanks to our 5 managers who do so much for our program behind the scenes and on the court! 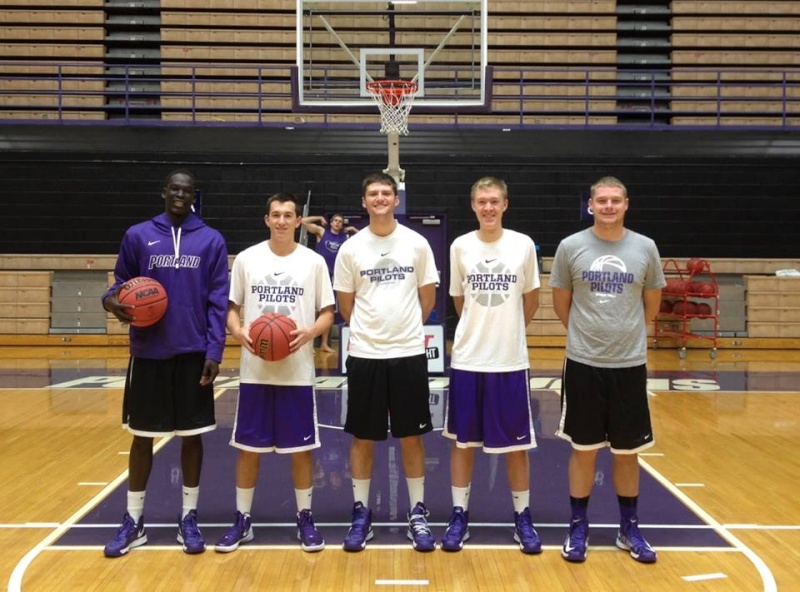