Dale Jr will sit out the next two races, throwing thousands of NASCAR fans into panic, since they won't know who to root for. All I know is they'll all root against Tony Stewart, for causing the wreck that resulted in this. dale-earnhardt-jr-concussion-2-races

Here's the video, if you didn't see it:
https://www.youtube.com/watch?v=CnNaG_LXwSM

I can not imagine how intense it must be for 28 cars to be running four wide at 200+ mph around that track, bumping and shoving each other.

Oh yea, I watched it, and have to admit I ducked as Tony's car came tumbling "backwards”...... actually all it did was slow to 180 mph while upside down.

Was never a fan of Dale Sr., but I have to admit Junior's car has been a lot better lately and he's one of the reasons so many watch this contact sport.

I gotta say though, I'm not a big fan of restrictor plate racing.....even if it does make for closer racing, it too often results in the mess shown in the video. NASCAR doesn’t need to finish races with a 25-car pileup. Let's hope the 2013 car can alleviate the absurdity that comes with the current form of pack racing. Close racing is good, but parking lot racing isn't.

Now that Kurt Busch is “parked” (with good reason) the fans will at least have a temporary “villain” to spark their fury in Tony Stewart.

Although having his garage and car used for a “church” wedding may just soften his image. 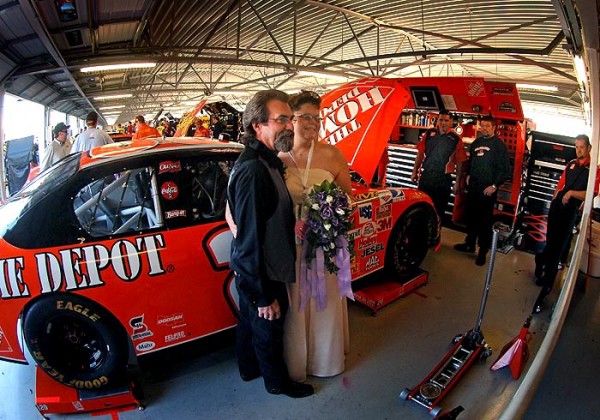