Some of you may remember Kayla Burt from her playing days at UW or during her time helping Jim Sollars achieve WCC Coach of the Year a few ago as his assistant. But most probably remember her for her comeback from a heart attack. Today Kayla is mostly known for her advocacy to prevent sudden cardiac arrest in athletes and CPR.

Kayla flat-lined at a New Years Eve party in 2002 and eventually returned to the court with a defibrillator implanted in her chest for the 2004-05 season and was the V Foundation comeback award winner after averaging 9.6 points and 2.9 assists per game. Kayla retired as a player in January 2006, after the defibrillator activated during a game.

This from the West Seattle Blog:

If it’s doing its job, your heart is out of sight and (mostly) out of mind – but that can change in an instant, as West Seattle resident Kayla Burt learned almost a decade ago. She was a UW basketball starter, hanging out with friends, when sudden cardiac arrest almost ended her life way too soon.

As amply covered at the time and afterward, she survived – in no small part thanks to her friends, whose actions included calling 911, performing CPR, and making way for emergency personnel to get to Kayla. She visited West Seattle High School health classes this past week with a message that could save others’ lives – about heart-health awareness, about learning CPR, and more.

Kayla’s post-college achievements have included working as a coach at the University of Portland, serving as an EMT and a hospital staffer, and, now, as outreach coordinator for the Bellevue-based Hope Heart Institute, which her online bio explains she joined “after realizing her passion for heart disease awareness and prevention of cardiac arrest, especially in athletes, overcame her desire to do anything else.”

Kayla, by the way, says that while experts never figured out why she went into cardiac arrest, she now lives “a completely normal life that involves daily exercise, basketball, biking, running, and anything else I set my mind to do!” 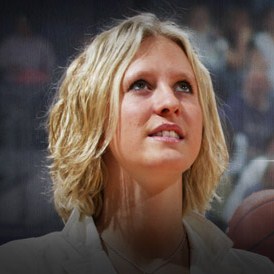