He was leading the league until now..

Ugh, not good news for SCU... I wonder if he could be back by next Thursday for our game down there...

A difficult season for Santa Clara has taken a turn for the worse. Leading scorer Kevin Foster is being held out of competition indefinitely after his weekend arrest on suspicion of driving under the influence.

Santa Clara police Capt. Phil Cooke confirmed the arrest and said no charges have been filed against Foster pending a review of the case by the district attorney's office

The junior guard, who averages 17.8 points per game, didn't play in Monday's loss to Loyola Marymount. He will remain sidelined while the university's student judicial process runs its course, according to a release issued by the university.

The Broncos host USF on Thursday and visit Pepperdine on Saturday.

"We will work with Kevin to help him through this," coach Kerry Keating said in a statement.

Keating was not available for further comment Tuesday despite a spate of on- and off-the-court developments -- none of them positive for SCU.

Foster wasn't the only player disciplined in the 74-62 loss to Loyola Marymount, the Broncos' third double-digit home defeat of the month. Point guard Evan Roquemore and big men Niyi Harrison and John McArthur did not start but played significant minutes.

The reason for disciplinary action against McArthur and Harrison is not known.

The incidents involving Foster and Roquemore could not have come at a worse time for the Broncos, who are 0-6 in the West Coast Conference -- the worst start to conference play in school history.

The Broncos also are in the midst of the most demanding portion of the schedule, with four games in eight days.

The stretch began Saturday when they lost at home by 12 points to archrival Saint Mary's.

"It will be tough," said Gaels coach Randy Bennett, whose team played three times in six days earlier in the month. "The way to manage it is just to rest. You want to fix things in practice, but you're better off having fresh legs.''

The reason for the tight schedule is the arrival of BYU as the WCC's ninth member.

As a result of having an odd number of teams, the conference was forced to schedule three Monday games on top of its standard Thursday-Saturday format.

It established guidelines to ease the travel demands: For instance, teams that play on the road Monday are given home games Thursday.

Three usual starters - guard Evan Roquemore and forwards Niyi Harrison and John McArthur began the game on the bench against LMU because of a violation of team policy. Those three entered the game after a few minutes.

Roquemore, 19, was cited for allegedly having an open container on the 900 block of Bellomy Street just south of campus about 12:45 a.m. Sunday.

I guess losing 7 straight (6 in WCC play) can drive you to drink. No wonder there's so much talk of beer on PN!

The original stop was for DUI, so they are tied, there, but the Zag players bring so much more!

[/just posted it all]

Santa Clara will be without the services of leading scorer Kevin Foster tonight at home against USF.

As a result of an incident this past weekend, Foster will be withheld from competition pending the outcome of the University's student judicial process.

Giving blacksheep at least some hope he won't have to change to a Wednesday flight to Las Vegas.

Foster did not play tonight in SCU’s loss at home to USF. Coach Keating again didn’t start “Open Container” Evan Roquemore, limiting him to only 37 minutes as his punishment. (Evan shot poorly, scoring only 10 points).

"Only" 37 minutes? That's some real tough discipline there.

Still no Kevin in SCU's loss at PU tonight.

I hate it when one individual puts himself above the team; not the first time the "best" player has done that.

An acquaintance says he saw him at a Bronco practice, so there's no telling if he'll be cleared to play in Las Vegas.

Monday, Santa Clara announced it was suspending Foster for the season after he went through the school's student judicial process. Foster has missed the last seven games, and he'll be out of Santa Clara's next four, plus any the Broncos play in the WCC tournament. Kevin's a junior; let's hope he comes back for a strong senior season against everyone but Portland.

It's sad really, and a harsh punishment, but there's no way to minimize the severity of the offense or its implications. Thankfully, society is viewing drunken driving much more seriously than it did in decades past when it was not unusual for the police to drive high school and college age youths home to their parents or dormitory making it more likely they would drive drunk again.

Kevin had a youthful indiscretion, stayed in school, but couldn't play the remainder of the season.

Jason Kidd, on the other hand, is 39 and was reportedly so drunk he had to be carried out of the club....then he attempted to drive home. Do you think HE'LL miss any games?

I don't think he'll be driving this Cadillac Escalade anytime soon, with or without a license. 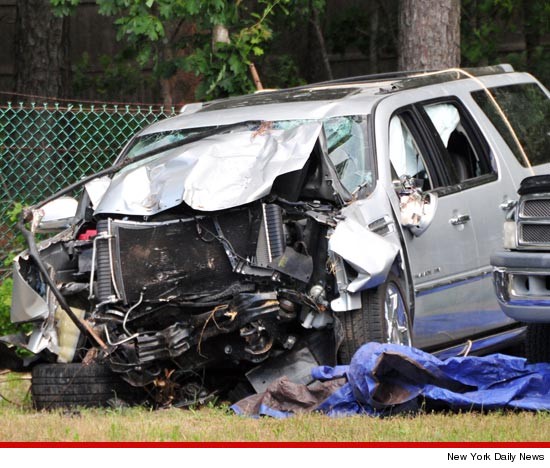 "Good engineering" is all I can say!