apparently you can't use the word Coward.

Hope has had her current contract terminated and is suspended for six months.

The CBA provides for a year at 65% pay or what the highest non-USWNT player gets for termination, so I guess she gets Sinclair's salary.

Oh -- she also can't play in any meaningless friendlies. 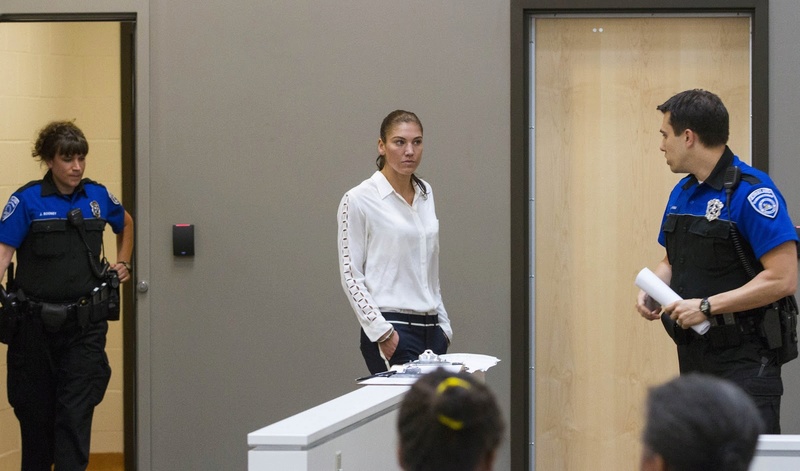 The PA has already announced a suit.

In Hope’s case there is a significant history that likely contributed to her contract status being suspended and terminated.

Calling another team cowards that just beat you was among the behavior issues with Hope. She earned her status.

We'll have to see what happens here. I hope the USSF wouldn't have done this without having plenty of ammo. Hope and the PA may feel she has a defense, but I'm wondering if there are other incidents we currently don't know about. If the PA goes through with a challenge, those all should come out. She already was on probation with the USWNT, before the Olympics, for her behavior, so the level of offense to get her suspended and her contract terminated would be lower than for a first time offender.

W
I think the only probation Hope might have been on is the domestic violence thing.
That's not USSF.
She did serve a 2015 suspension.

Hope is an idiot, but the USSF could have just let her contract expire in four months with the CBA and not cap her in the meantime. The CBA guarantees her severance anyway. What's four months?

Instead, they choose to raise yet another player dispute before the next CBA is negotiated.

I'm not sure who is dumber.


Is there anybody who now thinks there will be a new CBA  in time for the next nwsl season?

There is of course this incident for which we may not yet have the full story:


Hope Solo will miss the next two games after being suspended by U.S. Soccer for a minimum of 30 days following her husband's arrest on drunken driving charges.

Solo was with Jerramy Stevens when he was arrested early Monday morning for driving under the influence. Though she isn't facing any charges and Manhattan Beach (Calif.) police have not described the goalkeeper's behavior during the traffic stop, TMZ reported that Solo was "acting belligerent" and recorded the officers on her cell phone.

"During our current national team camp, Hope made a poor decision that has resulted in a negative impact on U.S. Soccer and her teammates," U.S. coach Jill Ellis said in a statement. "We feel at this time it is best for her to step away from the team.”

Solo released a statement after the suspension was announced. "I accept and respect the federation's decision, and more importantly, I apologize for disappointing my teammates, coaches and the federation who have always supported me," she said. "I think it's best for me to take a break, decompress from the stress of the last several months, and come back mentally and physically ready to positively contribute to the team."

The incident came just six days after domestic abuse charges against Solo were dismissed. Solo had been facing two counts of fourth-degree assault stemming from a fight with her sister and nephew, but the charges were dropped after the alleged victims refused to be interviewed by defense attorneys.

Though U.S. Olympic Committee CEO Scott Blackmun called the domestic abuse charges against Solo "disturbing" and "inconsistent with our expectations of Olympians," U.S. Soccer allowed her to continue playing while the court case played out. But the federation might have taken a dimmer view of this latest incident because it occurred while she was at training camp.

Solo will miss games against France on Feb. 8 and England on Feb. 13, and her suspension will be reviewed after 30 days. The U.S. women currently have no other games scheduled before they begin World Cup play June 8 against Australia in Winnipeg, Manitoba.

AW
That can't possibly be the cause of this suspension/termination. They punished her once already for it.

If it was, they need to say so and tell us why she was suspended twice for the same incident.

I think it has more to do with diverting attention from Jill Ellis and the worst finish in National team history.


While Hope's comments made us all cringe, the silence about what's next in the leadership is puzzling.

I think the whole point is that Solo did not get suspended solely for her poor decision to call the Swedes names or for any other particular incident, but rather an accumulation of incidents, some of which, even recent incidents, we may not know about. Nor do I think she is being suspended twice for the same offense, whenever a particular incident may have occurred.

While there may indeed be tension between Solo and Ellis, I hope that the reason for Solo’s suspension is in no way tied to the status of Ellis—hope there are adults running the store.

An explanation of the suspension from ESPN:

Goalkeeper Hope Solo has been suspended six months from the national team for what U.S. Soccer called "conduct that is counter to the organization's principles."

After the United States was eliminated from the Rio Olympics earlier this month in a penalty shootout, the 35-year-old Solo criticized the winning Sweden team, calling it "a bunch of cowards."

"The comments by Hope Solo after the match against Sweden during the 2016 Olympics were unacceptable and do not meet the standard of conduct we require from our National Team players," U.S. Soccer president Sunil Gulati said in a statement Wednesday. "Beyond the athletic arena, and beyond the results, the Olympics celebrate and represent the ideals of fair play and respect. We expect all of our representatives to honor those principles, with no exceptions.

"Taking into consideration the past incidents involving Hope, as well as the private conversations we've had requiring her to conduct herself in a manner befitting a U.S. National Team member, U.S. Soccer determined this is the appropriate disciplinary action."

U.S. Soccer also terminated Solo's contract when it handed down the suspension, which is effective immediately. She will be eligible to sign a new contract with the national team in February.

Solo was previously suspended for 30 days early in 2015 for conduct related to an incident at the team's training camp.

The Nyt is reporting that she is getting three months severance from the point of termination of her USWNT contract, quoting a USSF official. So basically she won't be paid for December, when there are no scheduled matches.

The current memorandum of understanding (CBA) expires Dec 31 and all contracts will need to be renegotiated.