OK so on top of steering the hullabaloo that is the Miami heat, apparently our distinguished alumnus has also been spending a lot of time working in the Phillipines (His mom's native country) doing coaching clinics and whatnot, and now he's gonna be doing work with the one and only Manny Pacquiao. Pretty cool.

Just spotted this on the UP facebook profile, pretty cool little video about Spoelstra:

Here' Another good article about Spoelstra And his dad and grandfather from Jonathan Abrams in the NYT.

He'll probably be able to buy a round of Pliny for the PN crew.

"We have one of the great young coaches in the league and (he) is an absolute member of this family," Heat president Pat Riley said. "He's the perfect coach for this team now. The reason why we did it was to extend him and keep him in the family and (not) have somebody come steal him away from us."


Spoelstra has been with the team for 17 years, starting in the video room and working his way up. He became one of the youngest head coaches in the league when he was promoted from assistant to replace Riley on the bench in 2008. In the past three seasons, Spoelstra has posted a record of 148-98 and made the playoffs each year, going 18-15 in the postseason.

He had been one of the lowest-paid coaches, earning a base salary of less than $2 million per season. He twice had his salary reduced as part of franchise-wide cost-cutting measures, once in 2009 and once during the recent lockout.

Here's an article about Spoelstra, and how he's implementing a wholesale change to the Heat offense, based on the principles of Chip Kelly! Chip Kelly - Erik Spoelstra

up7587 wrote:Here's an article about Spoelstra, and how he's implementing a wholesale change to the Heat offense, based on the principles of Chip Kelly! Chip Kelly - Erik Spoelstra

Watching the Ducks today, there was a Spoelstra reference. Apparently he is friends with Tennessee coach Butch Jones, and spoke to the Volunteers team. Didn't help them much, though.

up7587 wrote:Here's an article about Spoelstra, and how he's implementing a wholesale change to the Heat offense, based on the principles of Chip Kelly! Chip Kelly - Erik Spoelstra

Erik Spoelstra has been with the Miami Heat for nearly two decades, and their relationship won't be ending anytime soon.

Spoelstra has signed a multiyear extension to remain as coach of the two-time defending NBA champion Heat, the team said Sunday afternoon.

''What's overlooked for him is the management of the team,'' Dwyane Wade told AP last season. ''It's not the coaching part of it. It's, 'Can you manage these egos, these personalities, without having one your damn self?' He's done it.''

Hired as a video coordinator by the Heat in 1995, Spoelstra's rise through the ranks has been well-chronicled.
He was a scout, an assistant coach, a key part of Stan Van Gundy's staff in Miami and then started becoming considered Riley's protege not long after Van Gundy stepped down 21 games into what became a championship season for the Heat in 2005-06.

Riley retired for good in 2008, and the Heat didn't wait long before making Spoelstra the head coach. He inherited a 15-win team and improved it by 28 games in his first year. The Heat went back to the playoffs in 2010, and then found a way to keep Wade while landing James, Bosh and a slew of other players the following summer on their way to making three straight trips to the NBA Finals. 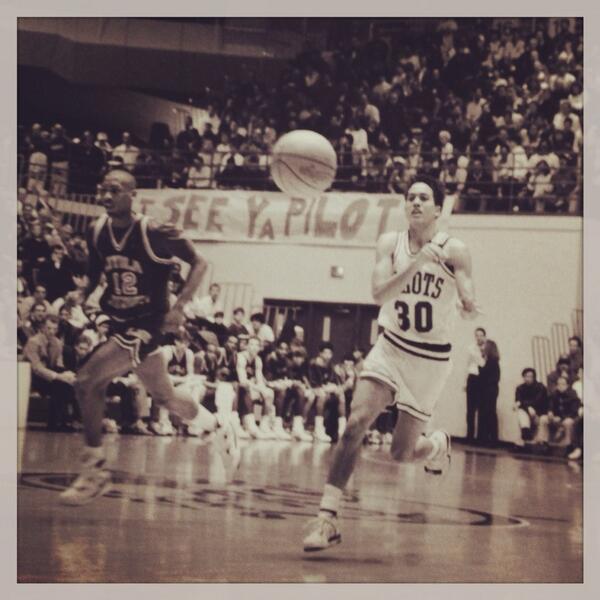 Look at the SRO crowd.....and that's NOT against GU!

Those LMU teams back there were pretty impressive!

A very nice profile in this (coming) week's Sports Illustrated on Erik.....

ERIK SPOELSTRA From the "Dungeon" to the top.....

Erik Spolestra was named the best coach in the NBA in a survey of league GM's. He was named top NBA coach with 55% of the vote. Monty Williams was second with 17%.