ESPN reported a story today saying that Wade said "He is our (Wade's and Bosh's) coach" while referring to Erik Spoelstra. Do you buy it or is our UP guy a sitting duck?

Oh man, it is sure going to be interesting for the next year...starting tonight on whether LeBron decides to join them.

Spoelstra might get a year and if he can't win then he's out. Regardless he's in a dream position and a nightmare situation at the same time. I'd have to imagine it would be quite difficult to manage those egos and it may be a bit more than Speolstra can handle.

A YEAR? Unlikely... The one year the Heat one the title Stan Van Gundy barely got half a season before the aging oil slick took over. And if Pat Riley used showing off his rings as a ploy to draw in LeBron, I hardly think he will sit up in the luxury box if things aren't going right...

Spoelstra was one of my favorite Pilots, but what do I do when he's got LeBron on his team. Can I root for Spoelstra and against LeBron?

Erik's involvement is the only reason I'm remotely interested in what happens to the Heat. I love that ESPN is finally giving the World Cup it's fair respect so that the networks will have a bidding war for the next Cup due to ratings. On the other hand, I can't stand the arrogance in creating "The Decision" for James and then the stupid interviews involving their own employees afterwords. The whole "We covered the story first" idea just feels insane to me. This whole thing was like a paid advertisement of Lebron and his new contract...except that the Boys and Girls Club received the proceeds. If a stripper takes off his/her clothes for Jesus that doesn't make it admirable...

"He was a fringe collegiate player at the University of Portland and started as a video coordinator for the Heat."

Down 2 games to 1 against the Pacers, Erik is again facing the firing squads:

DoubleDipper wrote:"He was a fringe collegiate player at the University of Portland and started as a video coordinator for the Heat."

That is what you call an ad hominem argument and it is also called a logical fallacy. Also, has anyone considered the fact that maybe it isn't Spoelstra's lack on control but rather a lack of respect and control from the Big 3? I would never yell at my coach the way that Wade did in that video.

Also also, it seems like the Miami Heat are like some of America's big banks and corporations: too big to fail? too good to fail? I guess not.

Remembering the Making of Erik Spoelstra ....

A nice insider perspective on Erik Spoelstra as he heads into the Eastern Conference finals by onetime Boston College and Miami Heat player (1997) Malcolm Huckaby from the Green Street Blog. 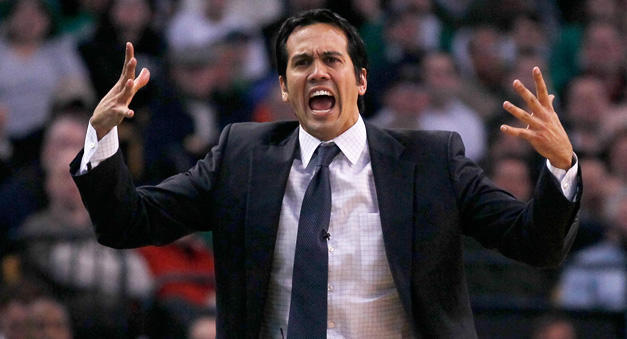 Another look at Erik, this time from ESPN:

What were his characteristics as a player?
Spoelstra was a heady point guard who started all four seasons at the University of Portland and was the WCC's freshman of the year in 1989. A proficient 3-point shooter. Willing passer.

Which coaches did he play for?
At Portland, Spoelstra played for Larry Steele, a Trail Blazer lifer (and member of the 1977 championship team) who had a less-than-successful career as a college coach.

Ha, ha, good one. I love these master's of the understatement!

On the hot seat, Erik Spoelstra has stayed cool for Miami Heat

Apparently the Celtics are still playing; from the Boston Globe:

It was during a flight to London for a scouting trip in 1995 that Chris Wallace first urged then-Heat general manager Dave Wohl to take a chance on a kid he had known since high school. Erik Spoelstra had played basketball at the University of Portland and in a professional league in Germany, and was now out of work

The rest of the story is at:
http://www.boston.com/sports/basketball/celtics/articles/2012/06/03/on_the_hot_seat_erik_spoelstra_has_stayed_cool_for_miami_heat/

The Miami Heat hasn't exactly been short of narratives in the past two seasons. Initially, they were poised to be one of the greatest teams ever, then once that didn't eventuate their collective carcass was dissected in a manner usually seen during CSI: Miami.

Inevitably, the discussion reached head coach Erik Spoelstra, and whether he was the right man to be at the helm of the newly forged superstar trio. The fact that Hall of Fame and championship winning coach Pat Riley has been omnipresent during his time at the helm certainly couldn't have been a calming influence for "Spo", and it armed writers with an additional source of ammunition. Surely, it was only a matter of time before Riley would step down from atop his throne in the Heat front office, and take his place at the top of the bench. Spoelstra, if the vernacular was to be believed, was a man living on borrowed time.

Yet, almost two seasons have passed since the Miami landscape was forever altered, and the one-time University of Portland point guard is still calling the shots. And doing a pretty good job, too.

While many people dismiss Spoelstra's record, stating that the dynamic triumvirate of players at his disposal makes his job easy, there's no disputing with his record. On Sunday night, competing in their second-consecutive NBA Finals, Coach Spo's Heat took a 2-1 lead over the Thunder, and has the chance to close out the series on their homefloor in the next two contests.

If that happens, no one will talk about the Illinois native, with headlines instead being devoted to LeBron James, Dwyane Wade and Chris Bosh. But Spoelstra deserves a tremendous amount of credit for Miami's successes to this point, even though he probably won't get it.

I had no idea Jesuit high was in Illinois.

Beaverton is kind of far out there.... You have to go over a hill!!!

PurpleGeezer wrote:I had no idea Jesuit high was in Illinois.

It is my recollection that Erik was born in Evanston, IL, but went to Jesuit when his dad, Jon, was with the Blazers.

I was born in Argentina and spent more years there than Eric spent in Illinois.

PurpleGeezer wrote:I was born in Argentina and spent more years there than Eric spent in Illinois.

I guess being a “native” of somewhere is a matter of perspective and personal choice. An old friend of mine who gained fame in the ’76 Olympics in Innsbruck was born in Chicago, but moved to Greenwich, Connecticut as a very young child and did most of her athletic training in New York. When interviewed by the press, or when asked by others where she considered home, she would invariably say she’s “a native of Illinois, but was raised in Connecticut.” Personal choice, I guess.

“Probably big on heart, a little bit less on skill, and that’s why he’s a good coach.”

Another article about Erik, this time from Manila. Nothing really new, but interesting nonetheless:

Living vicariously through his son, Erik

"You take a tremendous amount of joy out of it, but it's not fun. I'll be glad when the Finals are over."

This article from ESPN gives a bit of Jon Spoelstra's perpective on his son, Erik.

How do you spell NBA Champion: ERIK!

Does this man look pleased? 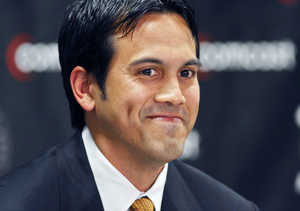 Maybe he'll have time to make the alumni game now!

Congrats Erik! Thanks for knocking out the OKC Plunder! Karma baby.

Spo's shining moment: The focus of Miami's championship-clinching victory last night was LeBron James, and why not? When you follow a great regular season for which you win the MVP award with an even more spectacular playoff run, capping it with a triple-double, you deserve the spotlight.

But here in Portland, we should raise a micro-brew to the man who steered Miami to the title -- a man who fostered his love of basketball in his Raleigh Hills neighborhood, in the hallways of Whitford Middle School, Jesuit High School and the University of Portland and especially on the courts, sidelines and offices of the Portland Trail Blazers.

Heat coach Erik Spoelstra is Portland born and raised, the son of former Blazers executive Jon Spoelstra. With the Heat committing hundreds of millions of dollars to gather James, Dwyane Wade and Chris Bosh, Spoelstra was the man tasked with making an imperfect roster work. And he did, culminating in the franchise's second championship.

Not too sure if he was Portland born, but certainly Portland raised. Let's call him a Portland native ... he's a winner! 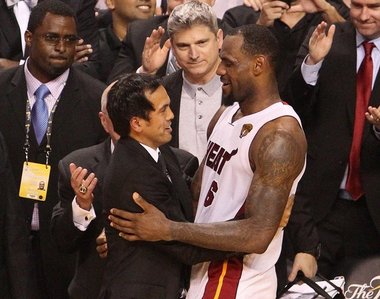 According to Wikipedia, Spoelstra was born in Evanston, Illinois.

ERIK -- Pride of the Philipines

Filipinos are holding their heads high....

Some Filipinos broke into tears while others were speechless after hearing Michael Buffer’s announcement that Bradley won by split decision during their June 9 fight at the MGM Grand in Las Vegas.

But the pain brought by Pacquiao’s loss has been eased with the victory of Filipino-American coach Erik Spoelstra’s Miami Heat in the NBA Finals, giving them a reason to hold their heads up high again.

Spoelstra made history as the first Filipino and Asian coach to steer a major US professional sports team to a championship after defeating the Oklahoma City Thunder, 4-1, in the best-of-seven series.

“I’m no Miami Heat fan as I was rooting for the Thunder,” confessed jeepney driver Ernesto Layno of Porac, Pampanga. “But I’m very proud of what coach Erik has achieved for our country and for all of us Filipinos.”

“It certainly helps to have another Filipino achiever in the field of sports. In some way, it helps us forget what happened to Manny (Pacquiao),” added Aldwyn Comayas, another jeepney driver waiting for early morning passengers going to the public market in Angeles City.

Comayas said Filipinos should also learn from Spoelstra’s perseverance amid criticism after the Heat lost to the Dallas Mavericks last year during the first season of LeBron James, Dwyane Wade and Chris Bosh playing together in the land of oranges.

Malacanang also congratulated Spoelstra for bringing glory to the Filipino people once again after winning the NBA championship.

“Although the Office of the President did not side with any team, it is proud of the fact that the Miami Heat’s coach is of Filipino descent,” said Deputy Presidential spokesperson Abigail Valte.

A starting guard at the University of Portland, Spoelstra considered playing for the Philippine Basketball Association (PBA) in 1992 after his college days in the Pacific Northwest.

But his plan did not materialize. Instead he saw action in Germany before getting hired as a video coordinator by the Miami Heat in 1995.

Spoelstra has visited the Philippines for the past three summers to conduct basketball clinics.

On his website, Spoelstra shared how he felt during his trips to the Philippines. “Both trips were transformational &mdash; truly life changing. I was born and raised in the US, and even though I visited the Philippines when I was a kid, I’ve always wanted a stronger connection with the culture and my family living there,” he said.

Spoelstra is proud of his Filipino lineage and said he wants the world to know that Filipinos “are rabid basketball fanatics, and it’s been that way for a while,” as he told the CBS affiliate in Miami.

He also mentioned how his family flew over from the Philippines last weekend to watch the NBA Finals.

They have much to be proud of in a coach that persevered, guiding a team that did the same.