Lest we forget what week it is....

Big rivalry game Friday-- Ducks and Beavers. we get to see if the Beavs are for real.
UCLA vs CAL. -- i'm a big CAL fan now. I could be a UCLA fan Sunday.
Virginia hosts UNC
USC plays Stanford -- do you believe in Miracles?
ND plays Seton Hall


Keeping an eye on potential hosting partners:
UW plays Arizona
Wazzoo plays AZ state -- they will have to get in gear if they want more than 20 games.
Portland state plays Eastern Wash

That suggests they're playing golden-goal overtimes. Is that possible, when we play full 2x10 minute OT here?

Yeah, it's really temporary, but it's still really cool... 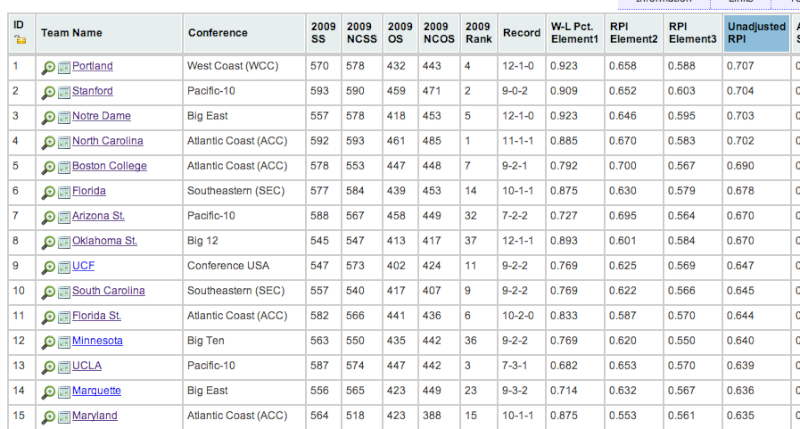 [Cal vs UCLA]
Unfair! Leroux is back from national team play, Alex Morgan is not.
Game still tied, but Leroux has a lot of shots.

Funny, an hour later the URPI snapshot is even better: Portland first with 710, the next three tied at 703.

If OSU beats Oregon, we will drop

If Stanford wins, they will rise, as will we.

Stanford may drop pending the outcome of SJSU-Hawai'i

we will probably drop Sunday, regardless the outcome of the Zag game.

and so it goes.

at least we are solidly in the top 4 mix.

In the event, none of them quite went the way we hoped. But no big deal, as long as Pilots keep winning.

Interesting thing about the UNC score. When they won, their RPI dropped a bit.

Needing a soccer fix, I headed down to Eugene for the UO – OSU match. Entertaining.

OSU led 1-0 at the break & was slightly in the driver’s seat that half.

Start of 2nd half UO came out fired up. Stoltenberg exploded for a goal within the first minute. She moves faster with the ball at her feet than most defenders can move in a full-out sprint, and she made several dangerous runs at the goal! The Ducks controlled the first 15 minutes of the 2nd half, taking a 2-1 lead. But then OSU seemed to regain its composure and somewhat controlled the rest of the match to win 3-2. The Beaver's 2nd goal was a great shot into the far upper right corner from distance.

Since the Pilots weren’t playing, I was able to watch some of the other players. Scout Libke, a teammate of Kendall’s from Lincoln HS, played well as the midfield playmaker for the Ducks. And Jenna Richardson is a dangerous frosh forward for the Beavers. Needs to look a bit more for the pass, but has good speed and pushes aggressively forward.

BC vs VT–– go you Hokies!
Iowa v. Penn State –– surprisingly, PSU is still in the running, although they hang on by a thread.
NC ST. v. Marland –– UM padded their non-com with cupcakes. are they for real?
Notre Dame v. Rutgers –– this one is on ESPNU at 10:00
TAMU v. Tex. Tech
USC v. CAL
UCLA v. Stanford–– not a lot of hope for the Bruins.
UW v. Arizona St. –– this could go a long way towards a tournamnet spot for one of these teams.
Wisconsin v. Illinois.

Technical difficulties, so they are showing an LSU - S. Carolina game from last year.

The Huskies beat Arizona State 1-0, getting a PK early and then holding on despite being outshot 19 to 6. That should help our RPI a bit, and improve their chance of giving us a regional partner for the playoffs' first round—not a team I'm dying to watch again, though.

Stanford up 2-nil at the half, over UCLA. Same halftime score as UP-Gonzaga.

#6 Florida loses in the final 38 seconds off corner kick by Auburn 0-1.

BC seems to be a real up and down team