Last night we kicked off our last campaign as a second-division club on a high note, beating Rochester 1-0 before a sellout crowd--15,418. Just the start we wanted in our quest to take the regular season and playoff trophies on our way out the door (we already have the Community Shield from some pre-season game somewhere, and the Cascadia Cup will make this a quadruple year. I think we're still a year away from taking the US Open Cup).

Rob's Jacket will probably agree with me that this game really was not a most dominant Timbers performance, but we were the better side. Then again those sloths in 108 can't be bothered to write match reports.

It was only the first game, though, and I think the boys will all be on the same page quickly. A Rochester defender finally handed over the game with a completely stupid and obvious handball in the penalty area.

Back to the attendance: 15,418. A sellout for the first game was a wonderful surprise. The North End was full and singing 45 minutes before the match, the way it ought to be. Last night we outdrew two MLS clubs, Red Bull, who play in a brand new SSS that by all reports is a gem, and Houston, one of the more successful clubs in recent years. But what illustrates the Timbers' support even better, I think, is this fact several bloggers pointed out: The USSF D2 Pro League (don't even ask about the name) has had seven other matches. The combined attendance of those matches was 19,242. That's only 3,824 more than the Timbers drew in just one night. It was also nearly as much as Miami drew over all of last season, so it also makes me wonder how much longer the second division as we know it will exist. You aren't in line for MLS tickets yet, better get it sorted soon or you may get left out.

Next victim: home to St. Louis on Thursday. 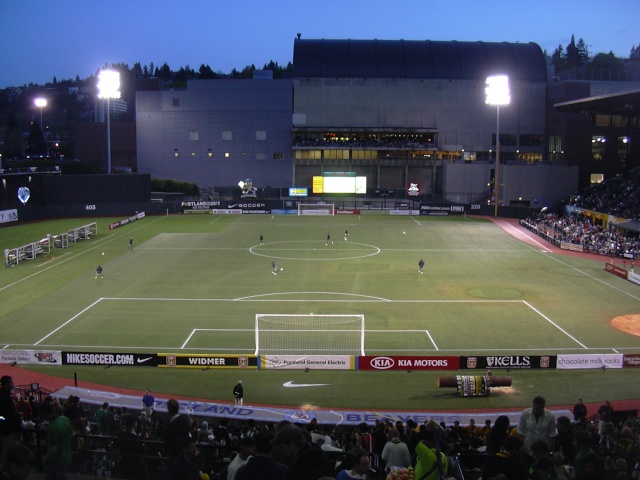 We didn't know much about St. Louis seeing as how they're an expansion club. Now we know:

-They go down real easily. One of them got stretchered off and just might have gone home in a Portland ambulance.
-They look like they went to Dick's and bought a bunch of Under Armour-style t-shirts and screened on the crest and numbered. Apparently they forgot to buy white shorts because they wore green ones with their white shirts.
-They like to foul when they can't keep up with the play.

Next up: Montreal away, Sunday April 25 at the ungodly hour of 11 am, then W@nkcouver at home on Thursday the 29th. 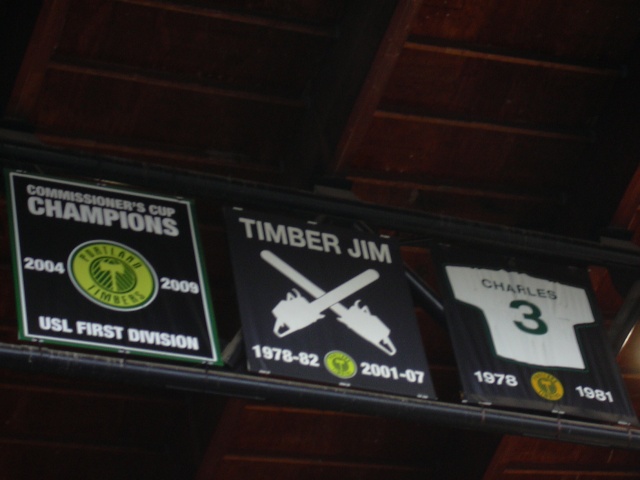 Drew 1-1 in Montreal today. Word on the net is the penalty that helped the Impact tie it was very dodgy.

Vancouver $hitecr@ps are here Thursday. I know the Blazers play also, but if they lose they're out and you don't want to see that, and if they win there's Game 7. As a free bonus this match counts toward the Cascadia Cup, so go watch the Timbers. You know you want to.

PurplePrideTrumpet wrote:I know the Blazers play also, but if they lose they're out and you don't want to see that, and if they win there's Game 7.

Don't count them out for tonight. If we win that, then we can eliminate the Suns on Thursday.

I am really not looking forward to making a decision on which to watch. Hopefully the Blazers have a late start (~7:45) and I can catch a lot of each.

DVR is your friend. That, and NBA games take so long you can watch the Timbers and sprint to the Bitter End for most of the second half.

Ryan Pore saved our @$$es last night. Beautiful free kick in the 7th, then the winner out of not much of a scoring chance right after we went down to 10 men. Sign him up for 2011 now.

Puntarenas is one of the better teams in Costa Rica and beat our second string last night 3-1. All three of their goals were beauties.

The best part was afterward when they came to our section to thank us, then posed for a team picture next to the log. Spread the love.

PurplePrideTrumpet wrote:
The best part was afterward when they came to our section to thank us, then posed for a team picture next to the log. Spread the love.

You must have been too nice to them.

The Timbers dominated possession all night long, outshot Puntarenas 23-5, had thirty-seven more corner kicks (roughly), and displayed everything but the deft killer instinct which the visitors had in spades. Five shots, all on frame, three in net. Ugh. Their second goal was a strike of pure beauty.

Seeing the guests take a lap around to salute the Timbers Army and pay their respects to Joey's Log was total class. Hope to see their club continue its rise.

VillaGorilla wrote:
The Timbers dominated possession all night long, outshot Puntarenas 23-5, had thirty-seven more corner kicks (roughly), and displayed everything but the deft killer instinct which the visitors had in spades.

Speaking of killer instinct, King Keita came back for the last 5 minutes and immediately showed he's going to be our top striker this year like he was last year.

One point from three home games. You might call this a frustrating stretch for the Timbers. All three times the opponent put away its only big scoring chance. The Timbers get tons of great looks but can't finish. Maybe a road trip to Baltimore is just what they need to turn things around.

Timbers vs. Atlas (Guadalajara), July 11, 6 pm. Watch the World Cup Final, then come on down. Bring your Chivas gear just to mess with them.

It was a cup tie, but winning always feels good.

Back to this after last night:

Sometimes the best way to voice your opinion is to not say anything at all.

Silence can be deafening.

I wish I could have been there for that. An appropriate response from my perspective. Is there anything in line for tomorrow's league match?

So we beat Kitsap 4-1 in a cup tie last night. That means the next round is Wednesday the 30th at home against...them.

"All this has happened before, and it will all happen again..."

I knew things would get better.

We're coming to Merlo in a couple weeks for a playoff game.

In other news, MLS commissioner Garber was in town for a groundbreaking today, and there's a webcam to follow the stadium construction.

Not much to see at this hour, but it's surprising what they've done with the place already.

I knew things would get better.

So whats the over/under on that logo to the far left somehow getting used less and less over the next 5 years.... I mean it might sound crazy, but maybe they take the secondary and put the wording in a gold ring around the outside... I'm surprised nobody thought of that already

Well, here we are one day from the end of our last regular season in the second division, and what better way to celebrate than to go up to Vancouver and cause some international incidents.

I hope to make it through the weekend without getting on the no-fly list so I can make it to Vegas in March...

They let me back in the country, so security must not be that tight, heh heh.

That song about "hug your women and drink your beer"? Yeah, one of those happened. A LOT.

The guy in the white shirt on the left side is a huge Pilot fan.

Anything to declare? Yes I do. This is a delicious meal: 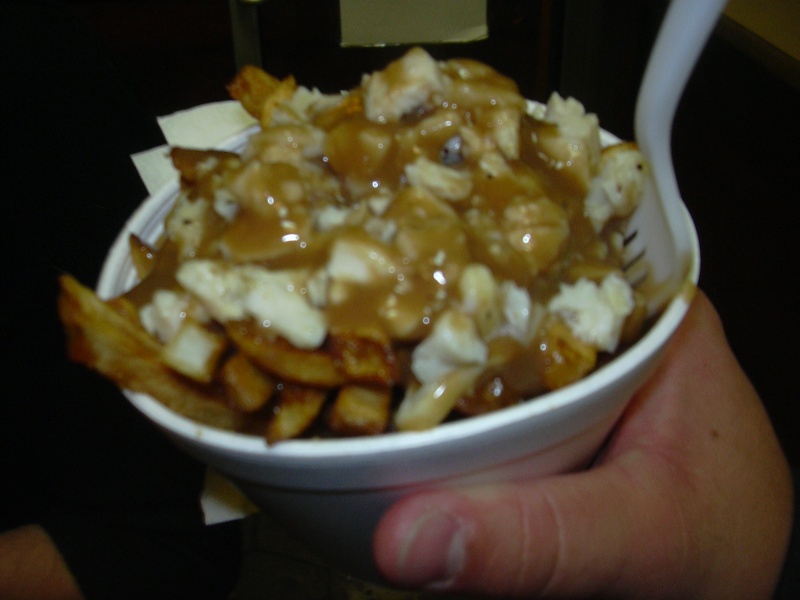 Christine seems to be getting the recognition she richly deserves back home: 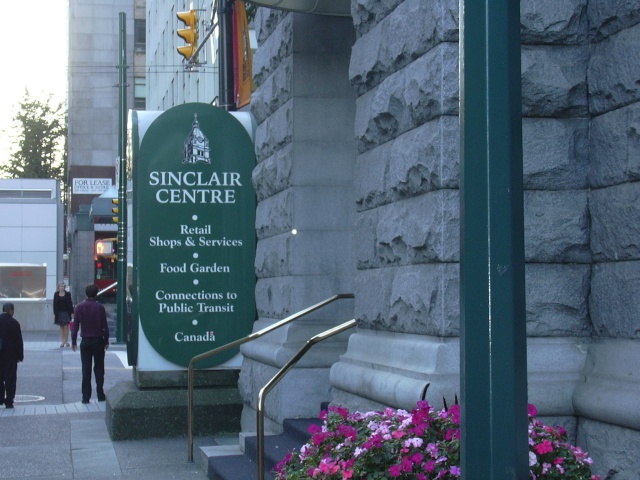 Can't wait for the game Sunday.

I saw Gavin at the men's game yesterday. If he was checking out keepers, Austin put on quite a show.

I also saw Steve Cronin and his girlfriend. I promise I noticed him first