Wow, I’ve been watching the Timbers for a few years now, and their performance last night, especially in the second half, was the best I’ve seen in their time in the MLS.

Their mid-field play and dominance moving the ball forward was something Timbers fans could have only have wished for a few weeks ago, but the most welcome change in their game was their ability to CONTROL the ball.

No, they are not Barcelona, but I kept thinking they were playing a similar ball control game and it was working, and it was a lot more fun to watch than anything we’ve seen at Jeld-Wen in a long time. (Am I wrong, or is that the first time the Timbers have won an MLS game in Portland in almost eight months?)

Caleb Porter can coach, and he’s getting the players he needs to play his style….the winners are the fans of the Timbers…..I just hope they can keep it up.

I think most of the media and fans agree, that second half was the best 45 minutes the MLS Timbers have played in 2+ years. It was the first home win since August 31.

Your impressions of the Timbers are correct. Caleb Porter does emphasize possession in the midfield, like Barcelona (and the Pilots), and the Timbers have been ahead in pass completions and possession % every game this season. The key is to recognize and make the pass that sends a winger through to put in a cross (like Chara on the first goal), or gets a forward 1v1 (the second). As in any system you also need forwards you can rely on to finish the chances they get (Portland hadn't had that guy until Ryan Johnson got here).

One big difference last night was that the defense was much improved. The goals conceded have been from poor passes and defenders failing to track their men. Last night, though, the back line had it together.

What's even better is the Timbers hit back after they lost a starting center back and their attacking midfielder to injuries in the first half. Porter has changed the attitude on this team, which is almost as important as changing the play on the field.

PurplePrideTrumpet wrote:Your impressions of the Timbers are correct. Caleb Porter does emphasize possession in the midfield, like Barcelona (and the Pilots), and the Timbers have been ahead in pass completions and possession % every game this season.

Yes, and like Pilots!!! Maybe that's another reason I enjoyed their play so much last night.

Thanks for the excellent analysis, PPT.....Like so many, I'm just a fan and don't know much about all the tactics, but we know what we like!!

A fantastic 78th minute goal by Will Johnson sealed the win for the Timbers over the Earthquakes last night. The video of the set piece goal is linked here. Last night's game was quite physical... it will be interesting to see how the return trip @ Buck Shaw goes this Saturday.

Under Caleb Porter, the Timbers are dominating possession and are pretty darn entertaining to watch. The back-to-back home wins over Houston and San Jose are impressive... now lets replicate that on the road!

Anyone who was wondering if the Timbers are for real this year: Yes. Make no mistake, KC is one of the best sides in the league and Portland came from behind twice on them for a road win. If not for two lapses in set piece marking it would have been 3-0.

They sure are pretty to watch.
Make sure you get to see Diego Chara' s thru ball to Rodney Wallace.

The Valeri-Johnson-Nagbe breakaway goal was pretty sweet too.

They need to work on defending fk's and corners, though.

So yeah, the Timbers are on a bit of a streak... helped along last night by a strong defensive showing from Andrew Jean-Baptiste, Pa Modou Kah and Donovan Ricketts.  One of the great moments vs. Keane has delightfully been captured here:

Exciting game last night. Down a goal early to the Galaxy. Lots of yellow cards. Great goalie saves on both ends. And a winning Timbers goal in the 94th minute!

The crowd atmosphere looked great, as usual. Perhaps we could get a report from some of you that attended, once the headaches wear off.

up7587 wrote:Exciting game last night. Down a goal early to the Galaxy. Lots of yellow cards. Great goalie saves on both ends. And a winning Timbers goal in the 94th minute!

The crowd atmosphere looked great, as usual. Perhaps we could get a report from some of you that attended, once the headaches wear off.

Arrived late, after the Galaxy goal, but was at once hit by the boisterous atmosphere....even more loud, and in many cases, more crude than ever.

Enjoyed the finish....and the crowd exuberance that accompanied it, but I was really dissatisfied with one aspect of the match throughout....the dissension on the part of the players and coaching staff towards the officials, which of course riled up the faithful.

One of the aspects of soccer that has changed, and I truly object to, is all of the arguing and accompanying histrionics that go with it.....just play, for god's sake!  While some were yelling at the officials, some of us were yelling at the players to shut up and play good football.

If it had been up to me (thankfully it wasn't), the game would have finished with each team having no more than 5 players on the pitch....the rest would have received red cards for dissent.

(Oh, I’m told the drive north on I-5 afterwards was gridlock with I-84 East between I-5 and I-205 closed….we headed to a bar in the Pearl after the game to avoid it).

Pulling out more than a draw Saturday against Philadelphia will be very difficult....one of the difficulties the Timbers will have to overcome is former UP Pilot, Conor Casey, now a member of the Union.

Conor had a lengthy career in Colorado, but due to injuries the Rapids allowed him to be exposed during the MLS Re-Entry Draft after the 2012 season. The Union decided to take a chance on Casey…and he’s rewarded them by staying healthy and scoring goals. 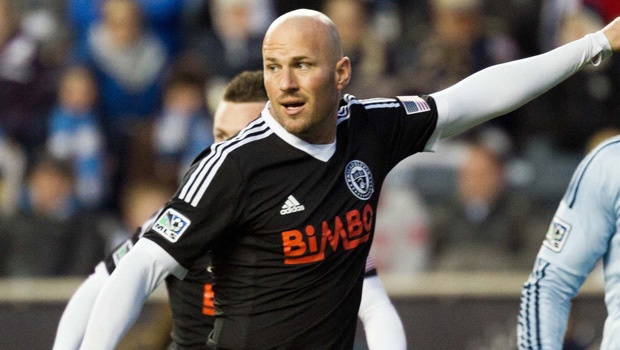 I’m guessing Bimbo is more than a derogatory slang term that typically describes an attractive but unintelligent female….usually a blonde.  I guess it could be the Mexican-owned baking company that had total revenue of over $13 billion last year…..and that’s a lot of bread.

DoubleDipper wrote:I’m guessing Bimbo is more than a derogatory slang term that typically describes an attractive but unintelligent female….usually a blonde.  I guess it could be the Mexican-owned baking company that had total revenue of over $13 billion last year…..and that’s a lot of bread.

The name Bimbo was first coined in 1945 when the company was re-branded from its previous name, Super Pan S.A. A mixing of the words bingo and Bambi, Bimbo's innocent, childlike associations were felt to fit the brand image the company wished to build. (The English word bimbo, with its negative connotations, has no cognates in Spanish.)