Collen got the Men's POW award: 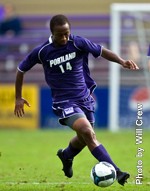 The University of Portland swept the West Coast Conference Player of the Week awards for soccer as Pilot standouts Collen Warner and Danielle Foxhoven were both recognized on Monday. Warner scored two goals with an assist for the men, while Foxhoven had four goals and an assist in Saturday’s 7-0 win over Gonzaga.

Warner, a senior from Denver, Colo., earns his first-ever WCC Player of the Week award and is the second Pilot men’s player to be honored this year (Austin Guerrero, Sept. 28).

He tallied the game-winner in a 3-1 win over LMU on Sunday, while assisting on Jarad vanSchaik’s second-half insurance goal. In Friday’s heartbreaking 2-1 loss to San Diego, Warner scored Portland’s lone goal on a penalty kick.