Interesting that FIFA mandates the maximum size of soccer leagues. I had no idea.

At first I thought you meant this guy: http://www.moretasteleague.com/home/category/news.html. Wrong commish!

That really is my favorite commish, I must admit....

But yeah the 18 team max for the top league surprised me too... I guess its different in other parts of the world with the promotion/demotion system, haha but I don't know how well the average american sports fan would take to their team being demoted for poor play....

Hey, if we had that demotion system would the Huskies be relegated to the Big Sky Conference?

wouldn't D3 be more appropriate? I doubt the Huskies could hang with some Big Sky teams.


You guys all know how I like to pour through the NCAA manual to try and figure out why things happen as they do.

Well, Today I went to the FIFA site and there's enough there to keep me busy for years!

Tonight I've been pouring through the FIFA statutes and the club licensing regulations.

There's nothing in either tome about an 18 team limit for leagues, so that might be somewhere else. (or it could have been made up).

There are some interesting items, though. DTR may be right about relegation driving that limit. FIFA apparently thinks relegation is a good thing. From the statutes:

Pretty cool, huh? you spend $80 million to get into the second division.....

There is a push to normalize how teams around the world are run by the 2010-2011 season, so that may be driving things. The MLS doesn't meet all kinds of rules in the club licensing rules, starting with the biggie that no natural or legal person can hold an interest in more than one club in a league.

But boy am I glad I know that fans are entitled to individual seats bolted to the floor and numbered, and that they have to have a back that measures at least 30 cm from the seat....

I might get my canopy - there's a rule that requires that for at least 10% of seating, too.

Nothing on the drop-down replay screen, though.

PurplePrideTrumpet wrote:The first meeting of the MLS task force was yesterday, and Merritt Paulson and MLS executives made their presentation to the members. The best quote from Merritt that I found in the O was when one person asked him if Portland fans would go to Seattle to watch the Sounders

(Hears the murmurs from the few dozen TA who came to watch)
"You're about to get rushed from the back. I can promise you Portland Timbers fans are not going to be driving to Seattle to watch Seattle Sounders soccer."

i wish i got a shot of the lady's face after asking that question...

i had some green streamer to throw but figured it was a bad idea in city hall... plus i am sure PPT remembers the last time i threw streamer... it did not hit its target... 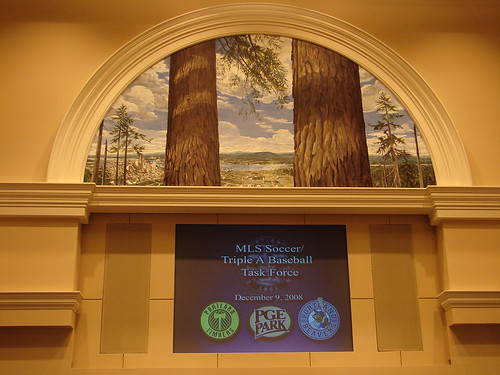 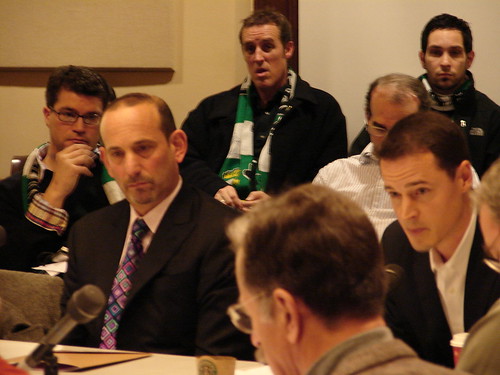 When one of the newscasts ran its story on this meeting, I noticed a lot of green and white in the background. Nice job, guys!

cutest moment: i am answering a question and mia is standing waiting for me... without be asked to she says "rose city 'til i die" in her little three year old voice...

Purplegeezer wrote:wouldn't D3 be more appropriate? I doubt the Huskies could hang with some Big Sky teams.

The week after the UW basketball game, I thought of a song we could have sung to them (to that footie standard, Guantanamera):

Purplegeezer wrote:wouldn't D3 be more appropriate? I doubt the Huskies could hang with some Big Sky teams.

I'll give 'em D-II. I think the Huskies could hang with Western Oregon.

Can teams get demoted for throwing dog poop?

An announcement is expected soon. I'm hoping for Portland to revive the PDX vs. Seattle rivalry, but, Miami also is making a pretty strong case:

Well, this should get the attention of some people, being on the front page and all:

Makes much more sense than Lents, I have to say.

PurplePrideTrumpet wrote:Well, this should get the attention of some people, being on the front page and all:

Makes much more sense than Lents, I have to say.

MUCH more sense... Easy access (Relatively close Max access), already established restaurants/bars in the area (and obviously across the river...), it never made sense to me why they had the Coliseum AND the Garden.... RIGHT next to each other, and downtown stadiums are just inherently cooler than those in the burbs/neighborhoods... JUST saying. My concerns would be first off traffic, whether the city would have to share revenue with the Blazers (haha which in turn give money to Paul Allen, who owns the Sounders... So indirectly PDX would be supporting a Seattle team??) and of course, could the polluted Willamette handle the further pollution of baseballs going into the river?? THINK OF THE FISHES...

I think Rose Quarter is the best option for a baseball stadium... centrally located, good transit options, shared parking facilities available... and the Blazers are looking for other development in the area. It seems to me that another sports venue would be a good fit... A riverside venue would be awesome, though....

Haha, why would the city need a riverside venue... Won't the pilots have one in a few years anyway??

The traffic will probably be no worse than a Blazer game night (Actually, it probably won't be as bad since the stadium would be a lot smaller than 20K seats). A few times I've parked by the Rose Quarter, walked over the Broadway Bridge, and ended up in the middle of the Pearl, where of course there's tons of places to go before the game. You could also take the train downtown. This also enables the Rose Quarter to be active the whole summer, not just until the NBA Playoffs are done.

Definitely, not to mention if they do it right, they could add a pretty money outdoor concert venue right in the heart of the city...

DaTruRochin wrote: and of course, could the polluted Willamette handle the further pollution of baseballs going into the river?? THINK OF THE FISHES...

Hmmm, might have to start carrying a mitt along in the boat!

Miami drops out!! They, along with Portland, Vancouver and St. Louis were considered the 4 favorites (Miami leading because of Barcelona backing). While this obviously doesn't solve PDXs tenuous stadium situation, it definitely doesn't hurt the MLS in PDX cause...

HOLY [blank]!!!!! And there they were as the front-runner. The sense around here was Miami had a very good chance because of the Barca name, and Portland was competing for the second spot.

Another big step in Portland yesterday was the task force tentatively approving the plan to finance the stadium remodel. It still needs to be approved by the city council.

Tough sell with the current economy... BUT seeing what happened with Seattle's season ticket sales, and the Timbers current fan base, coming to games and spending money at local business and whatnot, I think the potential revenue will be well worth it... Then again I am biased...

I'd say St. Louis and Portland are prob the frontrunners... with Vancouver VERY close behind...

As someone who stands in Section 108, Row J at Timbers matches, I'm pulling for PDX and Vancouver, and I think that's what's going to happen. The Cascadia Cup between Portland, Vancouver, Sh*ttle would be the best thing MLS has ever had happen to it. St. Louis has real funding problems, significantly worse than those of Portland. Miami is just an awful, awful, awful market for soccer - their USL-1 club pulled in a cool 1000 fans per game last year, and may actually fold within the month.
_________________
V-I-C-T-O-R-Y!

BUT I don't see all three of those getting it... the MLS doesn't want to "oversaturate" a region it hasn't ever really been in before... It would be cool, but from everything I've heard with the MLS inside dealings, it will be Portland OR Vancouver, no way there is both