The women had a nice win over the Ducks this afternoon, pulling off a 78-74 win despite facing a considerably bigger frontcourt. Though they trailed in rebounds, they played better defense and lead in almost every other statistical category.

It looks like Laiken is finally hitting her stride (21 pts.) and she's getting some help from the rest of the team.

The crowd size picked up a bit, too, despite a miserable day. the announced crowd was 256, not big, but better than it has been. Perhaps it will pick up some more if they get some conference wins. The way they are going, looks like that will happen.

It was a decent crowd. We (the band) played through halftime then packed it in...we were double-booked with our concert today at 3!

Women looked good overall, Laiken is looking pretty good. She was on fire from behind the stripe. 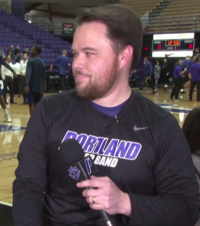 This is a great win for Coach Sollars and the ladies. Beating the Ducks at anything is fantastic!