I'm tired of the NCAA

I'm tired of the NCAA

Perhaps I am influenced too much by being out here in indiana, working w/ IU grads, and always kind of liking Bobby Knight, but after the recent IU fiasco, I'm a bit tired of the NCAA (and hence, Myles Brand).

Now, I don't want to sit here and defend Kelvin Sampson and his violations, but was it necessary to bring this to light right now? The nCAA just put all these IU players through hell. Their coach is gone now, and they really had no warning. Couldn't the NCAA have informed Kelvin and IU that there were some problems, issued a cease and decist type order, and waited until the season's end to deal with the issue? After all, none of the kids did anything wrong, why should they be punished?

Also, we're talking about a coach losing their job for major violations (one included giving an IU gym bag to a player - that is major??) of too many/impermissible phone calls. Now, I don't know all the details here, but at Oklahoma, kids were getting paid for doing nothing! That coach is still there, and there didn't really seem to be too much of a punishment to the school. Just those players were dismissed! That seems reasonable, don't punish the players who didn't do anything wrong. But at IU, we are punishing the players instead of waiting until the end of the season to take care of the situation.

I don't know, maybe I'm way off on this one, and just reacting this way because I am predisposed to thinking negatively about the NCAA and Brand's all-powerful, holier-than-thou attitude. They just seem unreasonable. The other day, I suggested to a co-worker that Mark Cuban should step-in, put in the capital, and create a sensible alternative to the NCAA with reasonable rules and regulations to present a truly level playing field that does not discriminate against any type of school. Then, all the schools should secede from the NCAA and join this new organization. After all, what gices the NCAA their power? The schools themselves?? (seriouslyy though, who says the NCAA gets to run the show)?

Agreed.... I don't know it just seems like the bureaucracy of the sport seems to overshadow the intent of the games themselves... really unfortunately... but with the past allegations at Oklahoma, Sampson was pretty much on DOUBLE SECRET PROBATION..... 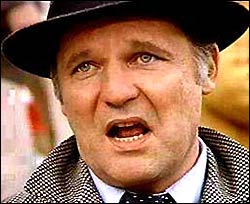 I think it's just unfortunate for the fans and players of IU to have the past indiscretions of the coach come in and muddy up whats amounted to a stellar year for Hoosier Nation...

My understanding is that it was IU that caused the "right now" of the situation. They had 90 days to get back to the NCAA and then a hearing at that point. IU just wanted this thing over, and gave themselves a week.

Question for you 54, I heard in one place that IU reported these violations to the NCAA this fall and was hoping that they would not respond that it was 5 Major violations but some minor violations. Have you heard this?

Yes, the whole thing was self-reported. Which is funny, because I heard a few analysts wanting to know where the compliance department was on this. Well, they caught it, turned it in (in October),and were hopeful that it would be taken care of. From there, this is my understanding (thourgh hoosier colored glasses):

1) NCAA launched its investigation, and came back with five major violations (one more than IU self-reported). The fifth violation came from the NCAA levying an ethical violation against Kelvin for allegedly lying to investigators.

2) It is unclear that the four self-reported violations were always deemed major, or that once Kelvin levied an ethical violation, the other four violations were essentially upgradded to major. I tend to believe the latter, as I just can't imagine that giving a kid an IU gym bag is a major violation.

Of course, baked into all this is the conspiracy theory - not a lot of folks in Indiana like Myles Brand (except maybe Purdue grads). Bob Knight was their man, and quite frankly related well to the blue-collar Hoosier. Many think this is just Myles trying to stick it to IU, essentially showing them who is boss. I'm not sure I necessarily buy that, but I won't pretend that it could no doubt be a contributing factor.

So, in response, yea, I think IU was trying to get ahead of this and ensure it didn't become a more major problem. Usually, a self-report ends much much much better for a school. This is why many were surprised that it came back as major (which also leads me to think that either Brands has an ax to grind or that the ethical violation upped the ante for the rest of the violations).

Just look at the NCAA Mission statement. Does the NCAA come even close to accomplishing that? Personally, I don't watch NCAA D1 basketball or Bowl Division Football. (And I like both sports.) It's all a sham. I say boycott their moneymakers (football and basketball). Hit 'em where it hurts!